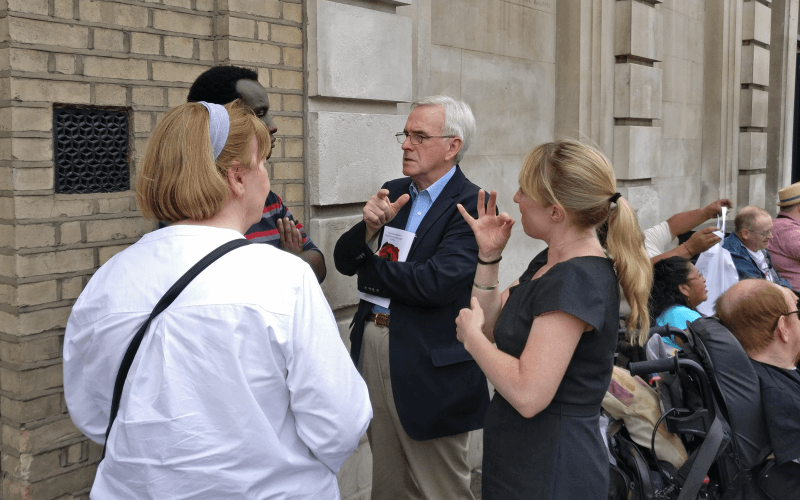 Labour’s shadow chancellor has described the UK government’s decision to co-host a Global Disability Summit – less than a year after its record on disability rights was dismantled by the United Nations – as “the height of hypocrisy”.

He said the government’s summit was an attempt to show that they were world leaders in disability rights “when they are clearly not”, but also “trying to argue that they could somehow influence or teach other countries how to treat fairly and equally disabled people”, which was “just outrageous.”

McDonnell (pictured, outside the summit) said disabled people and their allies had worked hard to ensure that the UN’s committee on the rights of persons with disabilities had “the fullest information to be able to assess the government’s performance on its policies towards disabled people”.

The result, last September, was “an outright condemnation of the role that the government has played”.

He added: “It was the height of hypocrisy then for them to host this event.”

He added: “If what came out of this summit was the admission by the UK government of their mistakes, at least something would come out of it. I doubt that that would happen.”

He also said – as he has stressed previously – that he wants DPAC and other disabled people’s groups “to set the agenda for Labour when we go into power”.

He told DPAC’s International Deaf and Disabled People’s Solidarity Summit that a Labour government’s policies would be based on the motto of the disabled people’s movement: “nothing about us without us”.

The DPAC summit had heard from representatives of disabled people’s organisations in four countries – Bolivia, Greece, Malaysia and Uganda – each of whom described how they had fought oppression and discrimination (see separate story).