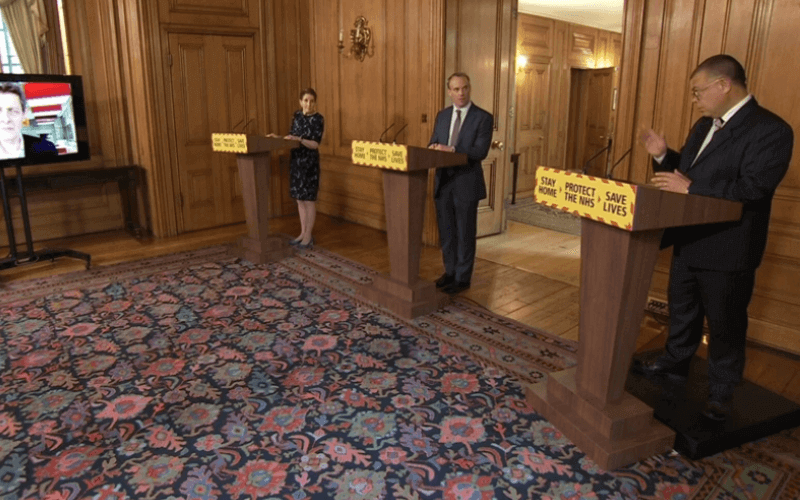 The government has been forced into court to defend its failure to provide on-platform British Sign Language (BSL) interpreters for “urgent” and “critical” COVID-19 televised briefings.

The judicial review hearing* yesterday (Wednesday) was the latest stage in the #WhereIsTheInterpreter campaign, which began in March 2020 after early televised briefings provided no access to an interpreter.

The case is being taken by Katie Rowley, from Leeds, who is Deaf, and argues that the government has breached its duties under the Equality Act.

More than 100 deaf people across the country had arranged to watch the high court case online, while many others were set to watch from community facilities and deaf organisations.

The #WhereIsTheInterpreter campaign, led by Lynn Stewart-Taylor, has raised money through crowdfunding to pay for independent expert evidence and court fees for the case, while Stewart-Taylor and fellow Deaf activist Mark Hodgson walked from Gloucester to Downing Street last October to raise funds for the judicial review and deliver a petition.

Campaigners have been calling on the government to act since the early weeks of the pandemic, when the government issued a series of crucial public announcements relating to the closure of schools and public spaces, lockdown, shielding and furlough, but which were not accessible to tens of thousands of Deaf people who use BSL as their first language.

Following pressure from Deaf campaigners, the government arranged for an “in screen” interpreter to be available, at first only on the BBC News channel, and then later also through government social media channels.

But there were later coronavirus briefings where there was no interpreter available, even on the BBC News channel.

Her case is that providing an on-platform interpreter avoids any technical issues, ensures that a BSL-interpreted version is available on any channel, and “demonstrates an inclusive approach by the government”.

The devolved governments in Scotland and Wales have both provided on-platform interpreters for their televised COVID-19 briefings.

Before the hearing, Rowley said: “The pandemic has been a very worrying time for everyone but to be pregnant and unable to understand the information coming from the government made it absolutely terrifying.

“Then government COVID briefings were essential for everyone to know what was going on and how to best keep safe – yet they were not accessible to the tens of thousands of people who have BSL as their first language.

“The late inclusion of an in-screen interpreter, which was then inconsistently available, is just not good enough.”

Her solicitor Chris Fry, founder of Fry Law, who has acted for the #WhereIsTheInterpreter campaign since March last year, said before the hearing: “Ensuring that information is provided in an accessible format can rarely be more important than in the midst of a pandemic.

“This case has brought Deaf people together in the most remarkable way to challenge the government to do better, and to fulfil what we say are its obligations under the Equality Act.

“It’s about time that the Deaf community is ‘levelled up’ by this government.

“They have a number of obligations under the law to ensure that the information they provide is accessible to Deaf people and my client believes that they breached these obligations in relation to the COVID briefings.

“We hope that the court will agree and that the government will review its provisions for the Deaf community to ensure that they have the same access to information as everyone else.”

The court’s decision was yesterday reserved until a future date.

A government spokesperson said: “We are committed to supporting disabled people through every stage of this pandemic and have established BSL interpretation at the No10 press conferences via the BBC News channel and iPlayer, available on all TV packages as part of Freeview.

“The BBC has also made their video feed for the BSL interpreter available to all other broadcasters and for use on No10 social channels.

“We continue to work across government to ensure that information and guidance is fully accessible.”

Fry is also representing about 350 deaf people in legal claims against the government over the failure to provide an interpreter for the first COVID-19 briefings.

Those cases have been placed on hold until the outcome of Rowley’s case.

Picture: One of the government’s COVID-19 televised briefings