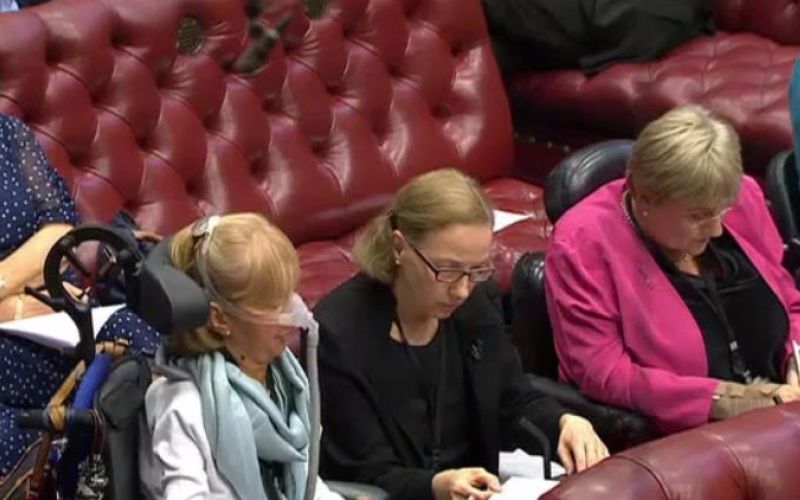 Disabled peers have demanded that the government rips up its “frustrating”, “clichéd” and “tepid” response to a major House of Lords report on the Equality Act’s impact on disabled people.

The Equality Act 2010 and disability committee reported in March on how equality legislation affects disabled people, following a nine-month inquiry.

The committee concluded that the government was failing to protect disabled people from discrimination, and that laws designed to address disability discrimination were “not working in practice”, while spending cuts were having “a hugely adverse effect on disabled people”.

An analysis by Disability News Service of the government’s response to the report, which was published in July, suggested that it accepted in full only about eight of the committee’s 55 recommendations.

In a Lords debate on the report this week, disabled peers lined up to criticise the government’s response.

Baroness [Jane] Campbell (pictured, left, during the debate), who sat on the committee, said that its report recommends “workable, low-cost, legislative and practical changes that would greatly enhance equality for disabled people in this country”.

But she described “disabled people’s frustration at the failure of the government to embrace the recommendations more fully”, and called on it to “go back to the drawing board”.

She criticised the government’s use of “the exhausted cliché that regulation will not change hearts and minds” when “all the evidence shows that without legislation we cannot win ‘hearts and minds’”.

And she said that Sir Bert Massie, the former chair of the Disability Rights Commission, had told her that the government’s “tepid” response to the report “clearly demonstrates a deep lack of understanding and concern about Britain’s disabled people”.

Baroness [Sal] Brinton (pictured, right), president of the Liberal Democrats, who also sat on the committee, said the government had showed in responding to the report’s recommendations that it “will not even regulate, let alone legislate”.

She said: “I join colleagues on the select committee in hoping that the previous government’s report back to us will be discarded.

“I have high hopes, because the evidence in the select committee report is so strong and will not go away.

“I call for the new government [under Theresa May, rather than David Cameron] to prove that they truly believe in inclusion by going back and rewriting their response.”

Her fellow disabled Liberal Democrat peer, Baroness [Celia] Thomas, whose idea it was to hold the inquiry, called on the government to “implement our recommendations without delay. There is no excuse for not doing so”.

The disabled crossbench peer Lord [Colin] Low, who did not sit on the committee, praised the “excellent” report.

He said that the government’s “drive to reduce regulation and red tape has resulted in rules and provisions that were helpful to disabled people being weakened or abolished”.

He said: “The report makes an important point when it says that these things should properly be seen as protections for disabled people rather than burdens on business, and that their removal under the [government’s] Red Tape Challenge should be reversed.”

Another disabled peer, the Liberal Democrat Lord Addington, said there was a need for “aggressive action” to enforce equality.

He said: “We here have to start pointing out to the rest of society that it will benefit by taking this appropriate action.

“If we make people with disabilities more economically active and more socially included, we will save ourselves hassle and trouble.”

The Conservative Home Office minister, Baroness Williams, said the report was “timely and comprehensive and highlights the continuing challenges and obstacles which disabled people face on a daily basis”.

She said it “rightly focused on a number of important issues, such as how adequately we imbed disabled people’s needs into the first steps to plan services and also when we construct premises”.

She added: “The report also fairly examined whether both public and private sectors have been sufficiently proactive in meeting the needs of citizens with a disability and whether there is still a tendency simply to react to problems once they have arisen or to be forced into action when pressed.

“We further acknowledge the importance of two-way communication between government and disabled people and their representatives, something that the report says we can improve on, in turn improving access to justice and how services are delivered.”

Government ‘has made no proper blackout plans’ for disabled people