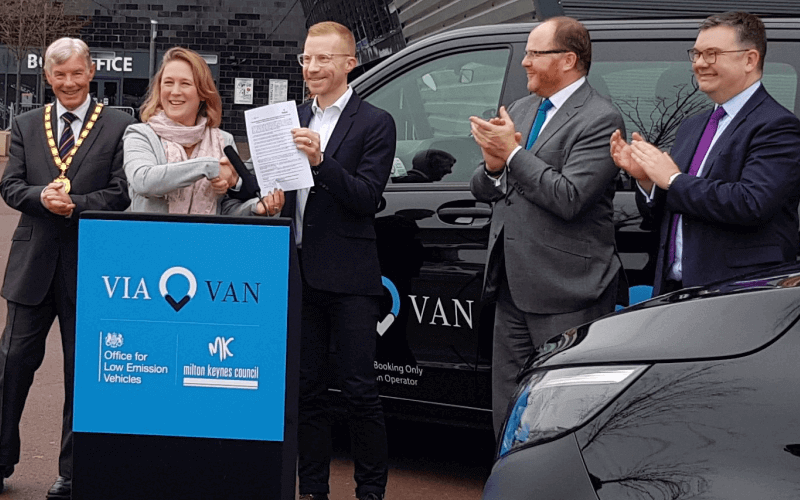 The Department for Transport (DfT) spent more than half a million pounds funding a fleet of on-demand electric vans, even though none of the vehicles were accessible to wheelchair-users.

The DfT funding helped ViaVan – a joint venture between car giant Mercedes-Benz and transport technology company Via – set up the shared ride scheme in Milton Keynes, with support from Milton Keynes council.

The government this week refused to explain why it apparently breached its legal duties under the Equality Act by funding an inaccessible scheme.

The scheme was welcomed last October by transport minister George Freeman (pictured, second from right) – who was sacked from the post in this month’s ministerial reshuffle – as he helped launch “the UK’s first fully electric fleet of digital on-demand vans”.

ViaVan launched the Milton Keynes scheme with five electric vans – none of which were wheelchair-accessible – and said this would be expanded to 30 on-demand electric shuttles during 2020.

Last October’s launch was then followed by the announcement of a new council-backed scheme last month, which will see concessionary bus passes used as payment for journeys on some routes within Milton Keynes.

Concessionary pass holders will be able to book their journey via a mobile phone app or by telephone.

But many concessionary pass-holders in Milton Keynes are disabled people, and none of the vans are accessible.

The trial is supposed to help the council understand whether “shared ride services” could complement the town’s bus network.

Carolyn Marshall, whose daughter is a powerchair-user and who raised the concerns about the ViaVan scheme with Disability News Service, said it was “shocking” that the ViaVan vehicles were not accessible.

She said: “The fact that the DfT has funded such an initiative, and the council have supported such a discriminatory scheme, is outrageous.

“To say that wheelchair-accessible vehicles will be introduced if the pilot is successful is grossly unfair, and a misuse of taxpayers’ money.

“A pilot should be a fair and reasonable test of the actual service, not an exercise in discrimination, with accessibility as an untested afterthought.”

DfT refused to say why it provided funding of more than £500,000 to a scheme that would be inaccessible to wheelchair-users.

It also refused to say if this funding breached its public sector equality duty under the Equality Act.

But a DfT spokesperson said in a statement: “It’s vital that all new forms of public transport are user-friendly for disabled passengers – comfortable and easy to use.

“We expect Milton Keynes Council to develop this pilot scheme into an inclusive, zero-emission transport service, which will be available on-demand to people across the city.”

It also refused to say if it accepted that this support was a breach of the Equality Act and its public sector equality duty.

But a spokesperson said in a statement: “Our supplier has assured us that if the trial is rolled out, accessible vehicles would be included.”

ViaVan refused to explain why it set up the scheme and the trial using inaccessible vehicles.

It also refused to say if it thought the council was discriminating against disabled people and was breaching the Equality Act by helping it secure government funding, backing its new fleet, and supporting the new trial.

But a ViaVan spokesperson said in a statement: “ViaVan is committed to providing efficient, affordable, environmentally sustainable, and accessible on-demand transport in Milton Keynes.

“We have recently partnered with Milton Keynes Council to trial how our on-demand service could complement existing public transport options.

“Should this service be extended following a successful trial, ViaVan will be committed to adding fully accessible electric vehicles to our fleet.