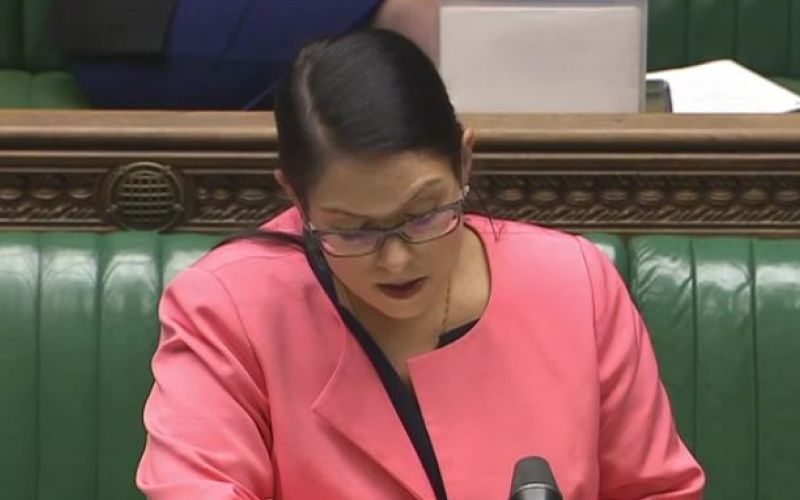 A minister partly responsible for the UK being found guilty of “grave or systematic violations” of the UN disability convention has been branded “highly offensive” after announcing that her government would try to become a “world leader” on disability.

When the UN committee published its report last month, concluding that the UK government had breached disabled people’s human rights across three key parts of the convention, her government dismissed its work, with work and pensions secretary Damian Green describing it as “patronising and offensive”.

But Patel has now pledged commitment to the convention in a bid to be seen as a global leader on disability.

On Saturday, Patel – now the international development secretary – used the International Day of Persons with Disabilities (IDPD) to publish plans to “lead a step-change in the world’s efforts to end extreme poverty by pushing disability up the global development agenda”.

A new paper published by her department says the UK government will “drive action to improve the lives of people with disabilities”.

It says: “By upholding our commitment to the United Nations Convention on the Rights of Persons with Disabilities, we will ensure people with disabilities are systematically and consistently included in, and benefit from, international aid and humanitarian assistance.”

The new paper adds: “We will continue to invest in social protection systems in order to increase their coverage, quality and sustainability.

“For too long, decision makers have overlooked people with disabilities – we will work to change this.

“We will strengthen our work on disability and establish [the Department for International Development] as the global leader in this neglected and under-prioritised area.”

Only last month, CRPD was concluding that the UK government’s social security reforms had “disproportionately affected persons with disabilities and hindered various aspects of their right to live independently and be included in the community”.

Linda Burnip, co-founder of Disabled People Against Cuts (DPAC), the grassroots network of disabled people that persuaded the UN to carry out its inquiry, said: “The thought of the Department for International Development led by Priti Patel fighting to improve the rights of disabled people around the world is laughable, given her previous track record as minister for employment.

“The thought that someone who was part of a government condemned by the UN for the grave or systematic violation of disabled people’s human rights in the UK having the remotest interest in improving the life chances of any disabled person is highly offensive.”

Patel visited the charity Leonard Cheshire Disability (LCD) as part of her efforts to use IDPD to promote her department’s new paper.

Disability News Service asked LCD whether it had any concerns about the UK government being found guilty by CRPD of “grave or systematic violations” of the UNCRPD, and then claiming it wants to be a global leader on disability, but the charity had not commented by noon today (8 December).

Remploy – which the Department for Work and Pensions has given Disability Confident Leader status as part of its newly-relaunched disability employment scheme – advertised the session with four of its disabled “ambassadors” on Twitter with the hashtag #AskUsAnything.

But when disabled campaigners took the four ambassadors at their word and started asking questions about Maximus’s links to the government’s welfare reforms – including carrying out work capability assessments (WCAs) – and the deaths of benefit claimants, they were blocked by Remploy.

One campaigner, @dinogoldie, was blocked after asking a series of questions including: “Is not a #disability employment service owned by a #disability denial factory a conflict of interest? #wca.”

@dinogoldie later added: “I asked @RemployPP some legitimate questions so they blocked me. Not very #DisabilityConfident.”

DPAC itself was blocked after asking: “How does it feel to work for a company owned by Maximus who make money from persecuting disabled people? #WCA #AskUsAnything.”

Another disabled campaigner, @otivar55, was blocked after asking: “Why did those poor people die during sanctions?”

Other than those put by anti-cuts activists, there appear to have been few questions asked of Remploy’s “ambassadors”.

A Remploy spokeswoman said that a “small number of people” were blocked on Twitter.

She said: “The Twitter Q&A on Friday was led by a group of Remploy disability ambassadors who were keen to share their lived experience on [IDPD], and support employers to create equality in employment opportunities.

“The Remploy disability ambassadors had a really productive, well-engaged discussion and we look forward to continuing to support disabled people to find sustainable employment.

“A small number of Twitter users were blocked from our account only because the questions they asked took the focus away from sharing experiences and helping employers create a more inclusive environment.

“We apologise for any inconvenience this may have caused.”

Meanwhile, Shaping Our Lives, the national network of service-users, marked IDPD by launching a new “charter for change” it has developed alongside the British Association of Social Workers.

The charter – produced following 18 months of discussions – aims to ensure all disabled adults and social workers work together to tackle barriers to independent living and to improve wellbeing.

Among its pledges, the charter says that both disabled people and social workers will “act like people, and not just follow mechanistic processes”, and that they will “have conversations rather than being bound by forms and procedures”.

And it says: “We will continue to work to overcome power imbalances between disabled adults and social workers leading to equal relationships and co-producing solutions.”

There is also reference to the crisis in social care funding, with the charter pledging that both disabled people and social workers will “be aware of the impact of policies across central and local government, and health and other services on disabled adults’ lives”.

Ann Nutt, a service-user and co-chair of Shaping Our Lives, said the charter “brings clarity and focuses on the development of a partnership strategy between disabled people and social workers”.

Joanna Matthews, chair of the user-led charity Unlimited Oxfordshire, said: “Some of our members have already faced cuts in their budgets or struggled to get a timely assessment.

“It really matters to have a good relationship with your social worker, so that in these times of cuts and hardship we can all work together to make a little go a long way.”

Another user-led organisation to mark IDPD was the Norfolk-based disabled people’s organisation Equal Lives, which linked with DPAC to hold a protest outside an inaccessible building in Norwich that is used by the government contractor Atos as an assessment centre for disabled people claiming personal independence payments.