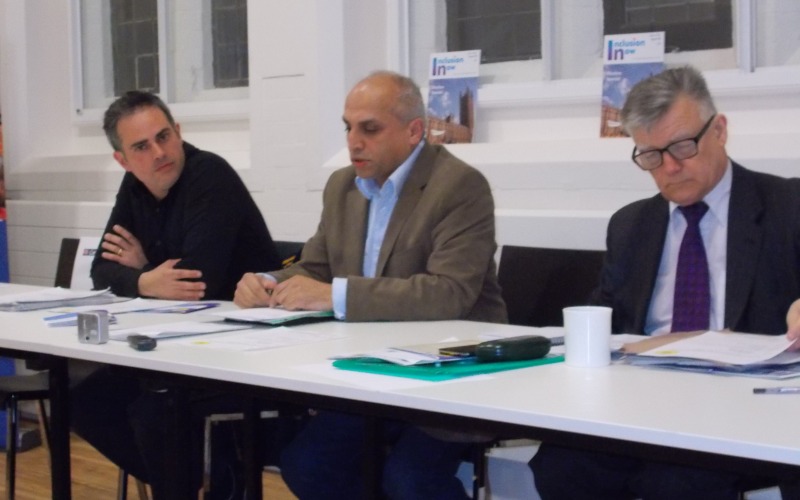 Campaigners have accused the Labour party of sharing the government’s appetite for segregating disabled children in special schools.

Shadow minister Steve McCabe (pictured, right) was repeatedly criticised for Labour’s refusal to oppose the coalition’s policies on inclusive education, at a pre-election hustings event hosted by the Alliance for Inclusive Education.

Labour and the Greens were the only parties represented, after UKIP’s disability spokeswoman Star Etheridge had to pull out due to ill-health, while the Liberal Democrat education spokesman Lord Storey failed to turn up, and the Conservatives refused to provide a spokesperson.

The disabled inclusive education campaigner Richard Rieser asked McCabe what his party would do to reverse the four new “caveats” introduced by the coalition, which make it easier for a mainstream school to refuse to accept a disabled pupil.

He said disabled campaigners had spent many years trying to get rid of “pernicious” parts of special educational needs legislation, and in 2001 new laws introduced by Labour had removed all but one of the “caveats” that gave schools excuses to refuse entry to disabled pupils.

But Rieser said that the coalition’s Children and Families Act (CFA) had brought in four new caveats that “all head teachers can now exercise to stop parents who want their children in mainstream schools”.

McCabe refused to say whether a Labour government would remove any of the caveats, although he did say that it would review the admissions code “to try to address the things that Richard talked about”.

He said: “I am not going to lie and say we are going to bring in primary legislation [to remove the caveats].

“I believe by reviewing the admissions code and taking the necessary steps when we see problems, we will be able to address some of your concerns.”

He said a Labour government would concentrate on ensuring the effective implementation of the coalition’s CFA, rather than reversing any of its measures.

He said: “We are not going to say it has to be specialist or all inclusive. What we say is where specialist schools provide good quality provision we will retain that but we expect them to work as support schools for mainstream schools around them.”

Two young disabled women in the audience called for more to be done on inclusion.

One, Yewande, pointed to the isolation facing disabled children and young people at schools and colleges, and the need for non-disabled students to walk into school with “an inclusive mind-set and to see disabled children as their peers… and right now that is not happening”.

Another, Lucia Bellini, asked McCabe and the Green party’s Jonathan Bartley (pictured, left): “What are the parties going to do to make sure that inclusive education is a right and not a struggle?”

When McCabe said Labour would look only at the admissions code, she told him: “I think legislation here is the key… so what are you going to do to change that?”

After the hustings event, Bellini said she had been “really disappointed” by McCabe’s comments, and that Labour appeared to have “no commitment to inclusive education”, and to rights that disabled people had fought for.

She said: “That they have basically been promoting segregation in an event like this is completely disappointing and devastating.”

Bartley, who will be standing for the Green party in Streatham, and is his party’s work and pensions spokesman, told the event in central London: “We believe there should be a bias towards inclusion.

“Quite simply, the right to an inclusive education will be in black and white in the Green party manifesto.”

He said the Greens were the only party that would abolish SATs [standard assessment tests] and league tables, both often seen as barriers to inclusion.

He said: “We don’t believe the role of education is to produce economic units to compete in the marketplace.

“As long as we see the current approach on education, we will not get full inclusion.”

And he said it was “sad” that there had been “no real proposals” from McCabe on how his party would improve inclusion in the schools system, and he criticised the “Tory and Labour acceptance of segregation”.

He said: “Labour, I believe, don’t get inclusion, if they ever did. They believe inclusion is integration. It’s a one-size-fits-all policy.

“The Greens believe that when you include a child, the environment changes for the better. The children are better educated because there is a better understanding of inclusion.”

But McCabe said: “We think the priority is to make the CFA work. We want to work with parents, with local organisations and lobby groups to make that happen.”

He said Labour had no plans to abolish SATs, although league tables were “probably past their sell-by date”, at least in their current format.

Bartley pushed inclusive education onto the agenda at the last general election in 2010, when – accompanied by his disabled son Samuel – he challenged Tory leader David Cameron on his plans to “reverse the bias” towards inclusive education.

He told the hustings event that he had fought for two years to secure a mainstream school place for Samuel.

A spokeswoman for Lord Storey said afterwards: “Lord Storey would not want to let anyone down but due to unforeseen travel difficulties he was unfortunately unable to make this event.

“Lord Storey is very happy to meet up on any other occasion to discuss important issues around disability.

“He unsuccessfully tried to contact the organiser and apologised for any inconvenience caused.”

But ALLFIE said it had received “no phone call, message or email from the Lib Dems”, so had lodged a formal complaint with the party and the Conservatives.