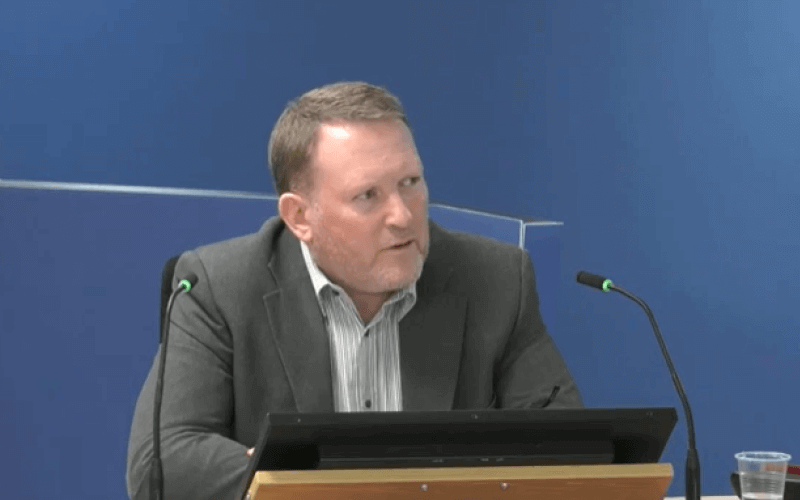 A senior civil servant has told the Grenfell inquiry that the government probably “forgot” to seek disabled people’s views on how residents with physical impairments could evacuate tower blocks in an emergency, six years before the devastating fire.

Brian Martin, who is still a senior official in the Department for Levelling Up, Housing and Communities*, also told the Grenfell Tower Inquiry this week that the government view in 2011 was that it would be “too expensive” and “disproportionate” to have a policy that would enable disabled residents to evacuate from tower blocks.

He agreed that this meant that the government accepted that some disabled people would have to die in their flats while other residents were able to self-evacuate.

Martin (pictured giving evidence) said that this “was what was considered at the time to be the prevailing… the reasonable approach to the problem”.

He accepted that the view at the time was that disabled people would self-evacuate if possible, or firefighters would rescue them, or they would die in their flat.

He told the inquiry on Monday (PDF): “You could have a policy, but what would you do with it?

“I mean… you can only expect of the responsible person [in charge of the building] something that is reasonable, and if you want to get to the point where a person who is unable to self-evacuate to be rescued in every event, then every block of flats would need a permanent staff of fire rescue people, which is unreasonable and impracticable.”

Martin was being questioned about the process of producing a fire safety guide** for the Local Government Association***.

Martin, who was a member of the guide’s project group, told the inquiry that he made no attempt to ensure that the authors of the guide obtained the views of organisations representing disabled people about how to evacuate disabled residents in an emergency.

When the guidance was published in 2011, it stated that it was “usually unrealistic” to expect landlords to put arrangements in place for disabled people to evacuate mainstream blocks of flats in an emergency.

Six years later, with the guidance still in place, 72 people lost their lives in the Grenfell Tower fire, including two-fifths of its disabled residents.

Martin, who was principal construction professional in the department between 2008 and 2017, when he was promoted to head of technical policy, was responsible in 2011 for providing policy advice to ministers on technical aspects of the building regulations relating to fire safety.

On Tuesday, continuing his evidence (PDF), he said it was “probably an oversight” that the government failed to seek the views of organisations representing disabled people.

When he was asked if that meant the government forgot, he said: “Well, I’m guessing so.”

On the same day that Martin was giving evidence to the inquiry, the disabled Liberal Democrat peer Baroness [Sal] Brinton was continuing efforts in the House of Lords to persuade the government to address the issue of disabled people’s evacuation in its building safety bill.

She said that she and the disabled crossbencher Baroness [Tanni] Grey-Thompson had made it clear that “the responsibility for getting safely out of a building should not be on the shoulders of a disabled resident alone”.

She proposed three amendments that would make it clear that all landlords of high-rise buildings had duties under the Equality Act to prepare personal emergency evacuation plans (PEEPs) for disabled residents.

She said: “Over 40 per cent of disabled residents died in the fire, a far higher percentage than any other category of resident.

“There were no PEEPs. Not only was there no guidance but… any arrangements for disabled people were actively discouraged by the government adviser and government officials.”

She added: “The first phase of the [Grenfell] inquiry recommended the provision of PEEPs for residents of high-rise blocks, but that is not what we are seeing now.

“Instead, the government are still consulting.

“Not mandating responsibility for the safety of disabled people to the accountable or responsible officers for the building will continue to put disabled people in high-rise blocks at risk.

“If the government will not support disabled people living in high-rise buildings by ensuring that those responsible for the building must have plans to help them leave, the only alternative is for the government to provide housing for them that is safe.”

She told fellow peers that ministers had agreed in the last hour to a meeting, but she promised to bring back her amendments at the final stage of the bill if progress was not made at that meeting.

She added: “This is truly a matter of life and death.”

*This is the department’s current name. It has changed several times in the last 20 years

***At the time, LGA was known as the Local Government Group