The government’s new disability forum has begun its work with a marathon six-hour meeting, with ministers and civil servants hearing strong messages from campaigners on issues such as independent living, hate crime and segregated services.

The Fulfilling Potential Forum will meet four times a year and is being run by the Department for Work and Pensions (DWP), in collaboration with the Department of Health.

Its first meeting took place today (3 April), and was attended for some of the six hours by Mike Penning, the Conservative minister for disabled people, and for a shorter period by Norman Lamb, the Liberal Democrat minister for care and support.

A majority of the 40 or so forum members invited to join by the government are user-led, including the Alliance for Inclusive Education (ALLFIE), UK Disabled People’s Council (UKDPC), People First (Self Advocacy), Disability Rights UK, Regard, Spinal Injuries Association, and Leeds Centre for Integrated Living.

Tara Flood, director of ALLFIE, said several delegates asked “where all this was going”, although she said it was too early to say whether the forum had a future.

She said: “None of us are going to waste our time unless it really will have an impact.”

But she was encouraged that Penning will be taking what they said to the next meeting of the 13-strong Interdepartmental Ministerial Group on Disability, which met for the first time last month, and meets again in June.

She said: “What happens at the ministerial meeting will convince us one way or another as to whether this has any future.

“If it does have an impact we would be crazy not to be involved. But what we cannot continue to do is to meet for six hours without anything productive coming out of it.”

She said concerns raised by forum members included rights under the UN disability convention, the ending of segregation and the need to end hate speech against benefit claimants.

Julie Newman, UKDPC’s acting chair, said the meeting was the first opportunity the organisation had had to meet a minister since the last but one minister for disabled people, Maria Miller, scrapped regular ministerial briefings.

Newman was also enthusiastic about the cross-ministerial group, and said: “That’s what we have been wanting to happen for years and years and years, because you can’t just have disability issues in isolation.”

She said forum members repeatedly brought up the closure of the Independent Living Fund, as well as raising issues such as the reality of independent living, hate crime, advocacy and advice services, and the need for more diversity among disability organisations.

She said: “It is very, very early days. However, it is the first opportunity we have had to talk directly to a minister since Maria Miller shut us down.

“I can’t say that this is a substitution for that but it is an opportunity for a fair crack of the whip. If there is a dialogue opened up, I think that is useful.

“If it is an opportunity for disabled people’s organisations and representatives to get together and create and experience a collective voice, then that is important.

“Effectively we were all saying the same thing: this is a terrible time for disabled people.”

The forum is one of three bodies the government has decided will replace Equality 2025, its high-level committee of disabled advisors, but it is running them on a collective budget of just £80,000.

The forum and the Fulfilling Potential Policy Advice Service (FPPAS) – its new body of expert, independent advisers on disability – are launched this month, and join the Disability Action Alliance (DAA), which was set up last year.

The forum’s task is to examine strategy across government, and provide a “community-based route into government” and a “route out to local disabled people”, but it will also identify issues that should be passed to DAA, FPPAS, and other government groups. 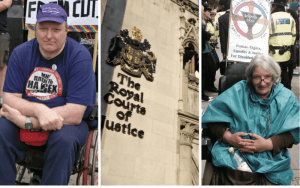