You are here: Home / Independent Living / ‘Huge barrier’ of care charges is forcing disabled people into poverty, peers are told 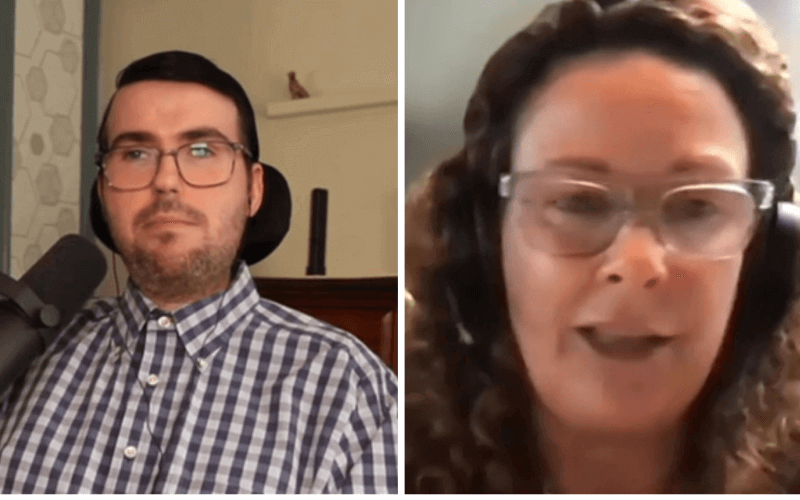 A House of Lords committee has been told how the “huge barrier” created by social care charges is forcing disabled people into poverty.

Andy McCabe, who himself uses council-funded support, told the adult social care committee that the charges being demanded by local authorities were “excessive” and “not sustainable for a lot of disabled people”.

McCabe (pictured, above, left), a social worker, was giving evidence to the committee as part of its inquiry into adult social care.

He said the amount of money being demanded of disabled people as a contribution to their support packages was “causing a lot of mental anguish” and was “morally wrong”.

He said that people in his situation were being asked to pay between £80 and £120 a week from their means-tested benefits, which “can’t be right”, and he suggested that all care charges should be scrapped, as has happened with Hammersmith and Fulham council in London.

The committee also heard from consultant Tricia Nicoll, another user of social care, both for herself and her two children, who said people should stop viewing the need for social care as “a disaster” and see it instead as the “enabler” it is.

Nicoll (pictured, above, right) said this was why she did not like the term “carer” because it meant that the disabled person was seen as being “cared for”, which she said was “a horrible concept”.

She said: “I don’t know if anybody here would want to be seen as someone who was cared for.

“Cared about, yeah, absolutely, but ‘cared for’ puts you in a very passive role.

“While we still use that language, I think it’s difficult to change how we think about social care.”

Nicoll also spoke about the importance of ensuring that support for users of social care was provided by disabled people’s user-led organisations (DPULOs).

She worked 14 years ago with Baroness [Jane] Campbell, a member of the committee, on a proposed independent living bill which aimed to ensure there was a DPULO in every local authority area in England.

But Nicoll said the funding for DPULOs was “no longer there” and the sector was being “decimated”, with DPULOs also being forced to “jump through hoops” by the local authorities that commission them.

McCabe also told the committee of the need for action to address the accessible housing “crisis”.

He called for strict laws to ensure a minimum proportion of homes are built to accessible housing standards.

He also called for action to address the excessive delays in the disabled facilities grant system, which has an average waiting time of five or six months for an adaptation to be installed once it has been approved by a local council.

He said: “That’s actually a really long time to live without a toilet.”

McCabe said the shortage of accessible housing to rent meant that disabled people were living in “potentially unsafe situations for an extended period of time”.

He told the committee that the accessible housing crisis needed to be viewed with “urgency” and as the “emergency” it is for many disabled people.

Almost all councils (98 per cent) responding to the survey said they did not believe the government had allocated enough funding for the reforms.

The reforms will introduce a new £86,000 cap on care charges in England but will not count financial contributions made by local authorities to people’s care and support.

Of the £36 billion the new health and social care levy will raise over the next three years, only £5.4 billion is ringfenced for social care reforms in England, LGA said.

The survey found that three-quarters of responding councils were not confident they would have the required capacity in frontline staff to deliver the reforms.

LGA warned that unless there was a government rethink, service-users “may experience reductions in quality and availability of care and support services, while at the same time paying more for them through the new health and social care levy and increased council tax”.