You are here: Home / Benefits and Poverty / Hundreds of disabled parents lose out over universal credit ‘financial blackmail’ 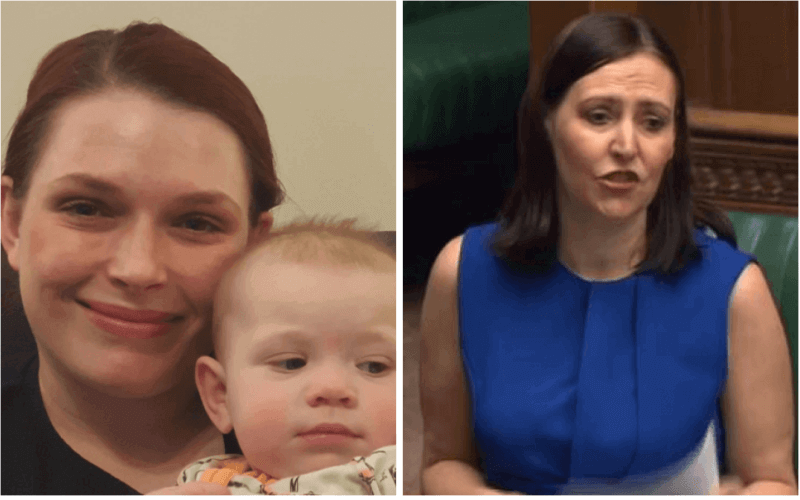 The government has been discriminating against hundreds of disabled parents who have been told they cannot claim vital financial support for their babies’ nutrition unless they transfer onto universal credit, NHS figures have revealed.

Disability News Service (DNS) has obtained the figures from NHS Business Services Authority (NHSBSA), and they show that hundreds of disabled benefit claimants are being deprived of support worth hundreds of pounds a year – purely because they have not yet transferred onto universal credit.

DNS reported last month how a disabled mother-of-two accused the government of discriminating against claimants of legacy benefits*, after she was told she could only claim support through the Healthy Start programme if she agreed to transfer onto universal credit.

Allie Bennett-Cox, from Winchester, said that she believed the government was trying to force disabled people to switch to universal credit through “financial blackmail”.

The Healthy Start scheme provides vouchers for milk, fruit, vegetables, pulses and vitamins for pregnant women and parents with children aged up to four if they are claiming certain income-related benefits.

But the scheme only applies to pregnant mums receiving income-related employment and support allowance (ESA) until the moment they give birth, at which point they are no longer eligible for the vouchers, despite inaccurate information about eligibility on the government’s Healthy Start web page**.

Disabled mums must then move onto universal credit if they want to continue to receive financial support with their baby’s nutrition.

The NHS figures obtained by DNS show that more than 600 pregnant women who were receiving ESA were also receiving Healthy Start vouchers in December 2020.

Those still on ESA are being prevented from receiving vouchers worth £442 a year for each child up to the age of one, and £221 for each child aged between one and four.

It appears to be part of the government’s continued push to force disabled people off legacy benefits such as ESA and onto universal credit, which could lead to them receiving a lower rate of benefits.

Last month, junior health minister Maria Caulfield told Vicky Foxcroft, Labour’s shadow minister for disabled people, that the Department of Health and Social Care (DHSC) did not know how many parents were affected by the decision not to allow claimants of legacy benefits access to the Healthy Start scheme.

Foxcroft said this week: “The Conservative government’s continued discrimination against parents in receipt of legacy benefits is immoral.

“It is unacceptable that they are effectively being blackmailed into transferring onto universal credit.

“It is also deeply concerning that ministers claim to hold no data on the number of parents who are affected by this, yet the NHS Business Services Authority has been able to obtain this information.

Bennett-Cox said this week that it was “hard to know where to begin to explain my dismay and frustration at how the situation is being dismissed by the government”, and that the figures showed again how the government was “so content to leave disabled people and particularly women behind”.

She said: “If you don’t think it will eventually be you they’ll leave behind, you’re wrong.

“Some of us have absolutely nothing left, and still they cut.

“There’s a shocking complacency amongst the public and an attitude of ‘as long as it’s them and not me’, as though further disadvantaging needy children doesn’t have a ripple effect.”

A DHSC refused to explain how it justified its continuing refusal to allow disabled parents on income-related ESA to claim Healthy Start vouchers once their child had been born, and why Caulfield had been unable to produce the figures when NHSBA had been able to do so.

DHSC has previously suggested that the difference in treatment of ESA and universal credit claimants was due to historic legislation, and that the department kept the eligibility criteria under review.

It said again this week that it was reviewing the information about Healthy Start eligibility held on the government website to ensure it was accurate, more than a month after it was first alerted to the inaccuracy.

Research by DNS shows the scheme was introduced by the Labour government in 2006, to replace the Welfare Food Scheme that was brought in during the Second World War.

No changes in eligibility appear to have been made at the time, other than extending Healthy Start to all pregnant women under 18.

But the government’s legislation webpage also suggests that eligibility was extended by the Conservative government to many claimants of universal credit in 2016, although apparently not to those on income-related ESA.

**The official NHS Healthy Start website has the correct information

Picture: Allie Bennett-Cox (left) who is ineligible for food vouchers for her son Oscar because she receives ESA; and Vicky Foxcroft