You are here: Home / Independent Living / ILF closure: DPAC brings fight to save fund to the heart of Westminster 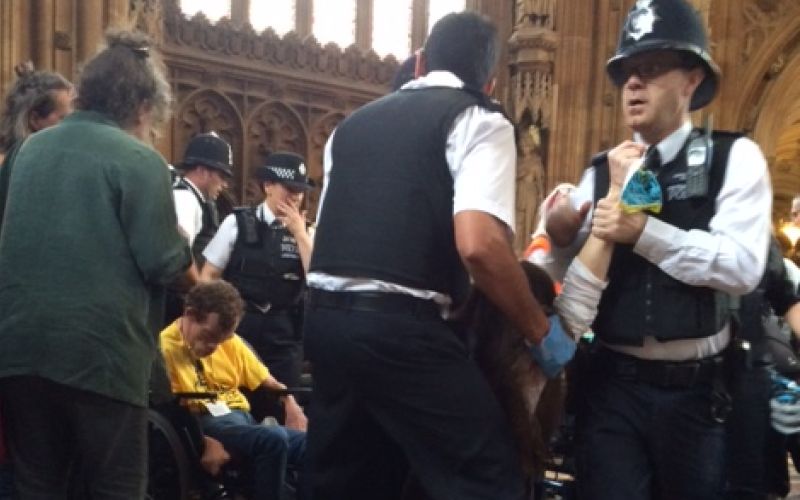 Disabled activists came close to forcing their way into the main debating chamber of the House of Commons during prime minister’s questions, in a last-ditch protest against the closure of the Independent Living Fund (ILF).

The direct action came during a pre-arranged lobby of parliament itself seen as a final attempt to persuade MPs to take action to halt the closure of the fund, due to take place next week.

About 30 members of Disabled People Against Cuts (DPAC), ILF-recipients, personal assistants, and other supporters, were in the central lobby of the Palace of Westminster yesterday (Wednesday) when a group of about 10 of them, including several wheelchair-users, broke off in the direction of the House of Commons chamber at about 12.20pm.

Two activists made it as far as the doors to the members’ lobby, an area directly outside the Commons chamber, but were stopped by police and parliamentary staff, who also blocked the route to the main Lords chamber on the other side of the central lobby.

Protesters later blocked the road outside parliament and also stopped traffic in Whitehall, outside Downing Street.

DPAC said it had been trying to force its way into the Commons chamber so that it could deliver a letter about the closure to the speaker, John Bercow.

Brian Hilton, an ILF-user and a campaigner against closure, said: “By and large the majority of officers kept calm, spoke to the protesters in a measured tone and did not interfere with us physically.

“However, there were a small number of officers who lost their cool and who I thought used excess force in dealing with at least one of the protesters.

“I saw one woman being dragged across the floor of the central lobby and then being grabbed by the neck.

“For a minute or two it all got a bit scary and I was quite shocked by the treatment of the woman, whose only transgression that I could see seemed to be shouting, ‘Save the ILF’.”

Robert Punton, another ILF-user who took part in the protest, said: “We got about halfway down and then suddenly it felt like thousands of policemen appeared from nowhere and blocked us off.”

He said that it seemed at first that there were “a lot of people there, but nobody was in control of the situation. Officers were running around like headless chickens.”

Punton said officers were “overly aggressive in their attitude and the way they spoke to people”, and he added: “They were caught off-guard and didn’t want to be seen that they were not in control of the situation. They wanted to gain back control as quickly as possible.

“They did it without caring about the safety of the people they were moving. They manhandled people and were more interested in the wheelchair than the person.”

He said the action became “quite heated” when the female protester was grabbed by the throat.

Andy Greene, a member of DPAC’s national steering group, said the police response had been “more aggressive than any I have seen” at other DPAC actions, with officers “pushing people, shoving them, and lifting electric wheelchairs up”.

Paula Peters, another DPAC protester, said: “It demonstrates the frustration and the anger over all the cuts. We feel we have nothing left to lose.

“We have tried petitions, lobbies, letters, meetings. You name it, we have tried it, and they are not listening.

“We have nothing left to lose, so we decided to take this form of direct action.”

A senior Metropolitan police officer confirmed that protestors “lawfully lobbying MPs attempted to breach security to enter the chamber of the Commons whilst PMQs were ongoing”.

Superintendent Chris Barclay, of the force’s parliamentary and diplomatic protection unit, said: “As they are required to, under the direction of the Serjeant at Arms [in the Commons] and Black Rod [for the Lords], officers took swift action to prevent this from happening.

“An inspector and two sergeants were quickly on the scene to direct the policing response.

“Their priority would have been to maintain the integrity of the working of parliament whilst ensuring the safety of all involved, and at all times where possible, preserving people’s dignity.”

He encouraged protesters to lodge complaints with the force or the Independent Police Complaints Commission if they felt that any officer “has not conducted themselves in a manner that is expected of them”, although he said no-one had yet lodged such a complaint.

He said: “The only tactic available to officers to prevent the security from being breached was to physically stop people from entering.

“By its very nature that would have included some degree of force. Each and every officer will have had to document what force they used and be able to justify it as proportionate to the potential threat they were facing.”

A force spokeswoman said that “one person and their carer were ejected from the Palace of Westminster for disorderly behaviour”, but there were no arrests.

She said: “Public access to the central lobby was restricted for around 30 minutes whilst officers dealt with the situation. At no point was security compromised.”

A House of Commons spokesman said that parliamentary business had not been affected by the protest, while “orderly lobbyists were allowed to remain in the central lobby to continue their lobby”.

He said: “The lobby was managed appropriately. As is typical during PMQ’s, the central lobby was extremely congested with visitors, MPs, media, those engaged in the lobby, and staff.

“The House has not received any formal complaints in relation to the way the protest was policed.”

Many ILF-users have told Disability News Service (DNS) how they have yet to be informed by their local authorities how much support they will receive once the fund closes, with more stories still emerging.

Hilton said the transition process had been “a bloody shambles”.

He said: “The government is washing its hands of its responsibility to support those disabled people with the highest support needs.

“Local authorities have been left to pick up the pieces, despite the fact that social care services are over-stretched and under-resourced.

“Less than a week to go until the ILF closes and I still don’t know what level of support I am going to be left with, and my staff who support me in all aspects of my daily life don’t know if they will have a job in a few weeks’ time.”

Last week, the Association of Directors of Adult Social Services (ADASS) admitted to DNS that there were problems with the transition process and insisted that central government was to blame.

Greene said the House of Commons action had been necessary because the transition process had become a “lottery”, with different local authorities interpreting government guidance differently.

He said some ILF-users had already been told they would lose “vast swathes of support”.

Punton said more had been done to highlight the importance of ILF in three hours of direct action protests than in five years of more mainstream campaigning.

He was only assessed by his local authority two weeks ago, and is still waiting for his post-ILF care package to be approved.

His funding appears to be secure until the end of July, but he does not yet know what will happen to his support package from 1 August.

Greene said that many non-user-led disability charities and local authorities had been “quite damning in their silence”, leaving ILF-recipients to campaign on their own.

He said: “They have left them exposed, when they know many of them will have to pick up the pieces themselves.”

And he accused ministers of “misdirection and untruths” in their public statements about the ILF closure.

The protesters have received backing from the disabled crossbench peer Baroness [Jane] Campbell, who helped block the same stretch of road outside parliament during a disability rights protest 30 years ago.

She told DNS: “I completely understand why disabled people and users of the ILF resorted to direct action on Wednesday, after attempting for over a year to meet with ministers and be part of the negotiated transfer process and getting nowhere.

“I have also asked on numerous occasions for the government to set up a monitoring system, a partnership advisory group of disabled people, and a guarantee to secure the ILF funds for at least three years.

“Nobody was listening and I did not receive any satisfactory responses.”

She met with the new social care minister Alistair Burt last week, after hearing “some pretty desperate stories” from ILF-users.

She said: “He listened attentively and said he would personally monitor the situation and check out a number of local authorities to see what plans they have in place.”

Baroness Campbell said: “The protesters have been pushed to resorting to stopping traffic and trying to reach MPs and ministers at their weekly gathering, hence the gentle action to storm PMQs.

“How could anyone not understand and support their desperate attempt to have a voice in the heart of government, when the fund, which maintains their human right to independence (article 19 of the UN Convention on the Rights of Persons with Disabilities) and freedom, is so under threat?

“I think most people who found themselves in their position would do the same – including the prime minister and his cabinet!”

Baroness Campbell told a seminar in the House of Lords that she had organised to discuss new research on the ILF closure, which took place as protests were taking place in the street outside: “Being inspired by the seminar and being inspired by what happened outside, the narrative is at least beginning to take place in a way in which those who are in charge can hear us.

“I have at least some hope that it will not be all death and gloom.”

Lisa Egan, another of the disabled protesters, told DNS that her father, an ILF-user, had yet to hear from his council what his care package would look like next week.

She said: “It is horrific that people have no idea whether they have the funding to go to the toilet this time next week.

“It is inhuman the way disabled people have been treated, and there is no advocacy support for people who do not have capacity to self-advocate.”

A Department of Health spokesman declined to comment on Baroness Campbell’s conversation with Burt, as it was a private meeting, but he said: “The government is committed to ensuring that ILF-users will not have their care interrupted when responsibility [for] meeting all of their care needs transfers to their local authority on 30 June.

“The Department of Health has also issued statutory guidance to support authorities in preparing for the transfer.”

The funding is being transferred from DWP to the Department for Communities and Local Government, before being passed to local authorities and devolved governments.

Picture: Protesters in the central lobby; picture by DPAC