You are here: Home / Benefits and Poverty / Jack Carroll: ‘I was treated with derision and suspicion in my PIP assessment’ 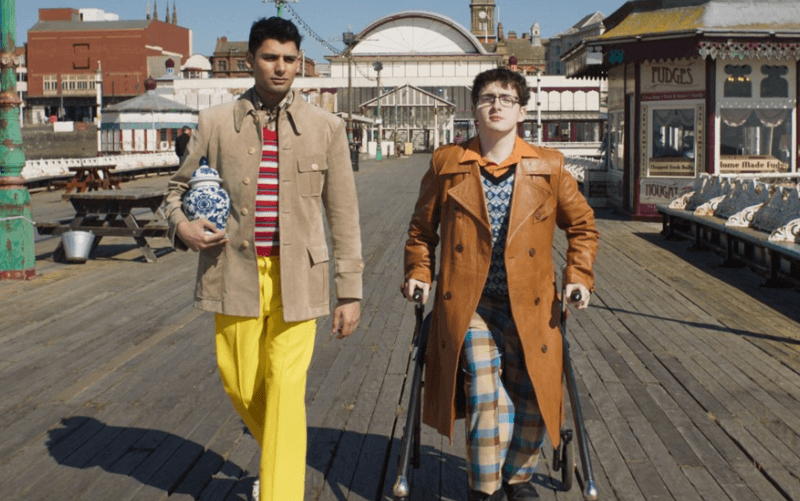 Disabled stand-up comic and actor Jack Carroll has blamed the government for creating a “hostile environment” that led to him being treated with “derision and suspicion” during a routine disability benefit assessment.

Carroll, whose new film Eaten by Lions is released tomorrow (Friday), said he was shocked by the “semi-dehumanising” tone used by the assessor last August.

He declined to say where the assessment took place becausehe believes his treatment was due to “learned behaviour” taught by the government, but he told Disability News Service (DNS) that his personal independence payment (PIP) assessment was a “strange and Orwellian experience”.

He said: “I felt like I was being treated with derision and suspicion.”

Carroll, who uses a walking-frame and had turned up five minutes late because he had trouble finding a parking space, was at first told that the assessment would not now go ahead.

“Imagine if someone was a lot more disabled than I am,” he said. “I could not believe that. That really just brought home the system as a whole.”

He told DNS that his experiences as a disabled person have been “generally positive”,and that he has found most people “decent and relatively compassionate”, adding later: “I try not to get too outraged about things.”

He is, he said, naturally “quite a gregarious, affable person”, but even he became “a bit angry” after the initial confrontation.

Carroll said he found it shocking to be confronted with “a semi-dehumanising tone which I don’t really come up against in my day-to-day life”.

He added: “At the time I got annoyed with the person but… then I took a step back and I thought that was just learned behaviour from a government policy that is trying to marginalise and destroy, for a lot of people, any hope.”

He eventually received the level of benefits he feels he was entitled to, but he said: “The former system [disability living allowance] was an awful lot easier and more human.”

He said the PIP system must change.

The behaviour he came across at his assessment, and the failure to “weigh up the emotional impact on the person” was, he said,“systemic rather than individuals being knowingly horrendous, so you’ve got to change the system.

“I’d brought a paper copy of my ID, which the assessor wasn’t for accepting, so that’s another hurdle, and then general questions about how far I could walk, how far I could lift my leg up, things that I don’t think about, and hate really to put the microscope on in that minute detail, at whatever level is some level of a humiliating experience.

“I don’t think there is any care to make people feel human in that environment.”

He said he blamed the government for the “inhumanity” of the system, because it “created the climate for it”, and he added: “I think the government creates a hostile environment for most people who aren’t Jacob Rees-Mogg.

He also believes that the “constant hammering of Brexit” acts as a “mass hypnosis technique” to distract people from “the things that are really going on in the world”,such as the way disabled people are treated, the PIP assessment system and the Windrush scandal.

Fans of his stand-up – he has become a regular on the comedy circuit in the years following his breakthrough as a 14-year-old in 2013, when he was runner-up on Britain’s Got Talent – can expect a routine based on the PIP assessment process to appear in his act soon, he said.

Eaten By Lions is his first film, but it follows television appearances in shows such as the Sky sitcom Trollied, CBBC’s The Ministry Of Curious Stuff and BBC1’s Big School, as well as stand-up slots on ITV1’s Sunday Night At The Palladium and BBC2’s Live At The Apollo.

He said his role in the film – a “classic road movie” about two half-brothers, one white, Pete, and one Asian, Omar (pictured), who go to Blackpool in search of Omar’s dad –gave him greater freedom to improvise and “play around” than his work on Trollied, with its “tight scripts”.

He enjoyed the filming process, which took place two years ago, and said it felt like going “on a journey” with a “good group of people”.

One of the things he likes about the film, he said, is that although it deals with issues of diversity, it doesn’t do so in a self-conscious way. He looks forward to a future where disability is just an everyday fact of life on television.

“In five or 10 years it would be nice to see disabled characters on TV and presenters and things just be existing and people referencing it in a less overt manner,” he said.

Asked whether his generally positive view of how disabled people are usually treated came as a result of his own experiences – he was discovered at the age of just 12 by comedian Jason Manford and opened for him at three of his shows in 2010 – he said: “You can make that argument.”

But he also puts it down to his family, and the attitude they “instilled” in him about his impairment.

“Obviously a compassionate one, first and foremost, but also a belief that anything you put your mind to, with the help of others, you can achieve. That has played a part in my outlook as well.”

He also believes that growing up as a disabled child helped his development as a comedian.

He said: “I probably wouldn’t have developed the sense of humour or the ability with language that I’ve developed if I didn’t have a disability, because as a kid I couldn’t necessarily move around as quickly, I had to get good at talking and being able to communicate things to people.

“I’d like to think that played a part in the development of being able to do what I do for a living.”

His interview with DNS came a few weeks after the latest controversy over “cripping up” – the issue of non-disabled actors playing disabled characters – this time following Bryan Cranston’s role as a wheelchair-user in The Upside.

Carroll said he understood why the film’s producers chose Cranston instead of an unknown disabled actor.

“I know there are issues of representation and not everyone getting a foot in the door, but for any actor if you had a choice between Bryan Cranston and an actor without a profile they are always going to go for Bryan Cranston.”

He said the solution was to improve representation of disabled actors at the grassroots level and build from there.

“It’s about giving disabled actors a platform where they can compete with Bryan Cranston,” he said, “but that begins at a grassroots level.”

Now 20 and no longer a teenage prodigy,he is writing a sitcom, as well as continuing with his stand-up and enjoying acting jobs when they come along.

“I enjoy it all,” he said. “I would like to keep doing a little bit of everything.

“I have got goals and things I would like to accomplish but the best stuff in my career has come from leaving a gap to let the thing happen and let whatever it is do its work.”