You are here: Home / Activism and Campaigning / Jared O’Mara calls for action on bullying and harassment by MPs

A newly-elected disabled MP is calling for action to address the bullying and harassment he has witnessed in the House of Commons, in a bid to introduce a new culture of “decorum and professionalism” into parliament.

Jared O’Mara has previously spoken to Disability News Service (DNS) about some of the access barriers he has faced in parliament since he defeated former Liberal Democrat leader Nick Clegg to win the Sheffield Hallam seat in June.

Now he is calling on the House of Commons to draw up a policy on bullying and harassment by MPs, and to carry out a regular access audit of the parliamentary estate.

Many disabled people were appalled when O’Mara (pictured, centre) – who is unable to stand for longer than five or 10 minutes – described earlier this month how he had been unable to attend a couple of debates in the main Commons chamber because there were no seats available.

But he has now told DNS that he wants the parliamentary authorities to introduce an anti-bullying and harassment policy that would prevent the kind of behaviour he has witnessed in the Commons chamber.

He said he had not been bullied or harassed directly, but had been affected by the comments and “jeering” directed against male MPs who have taken advantage of new rules allowing them not to wear ties.

The new rules are believed to have been introduced by the Commons speaker, John Bercow, after O’Mara made it clear he was unable to wear a buttoned shirt and tie because of his impairment.

All male MPs are now allowed to speak in the Commons chamber without wearing a tie, while O’Mara has also been allowed to wear a tee-shirt under a jacket.

But O’Mara said that comments made by the transport minister, John Hayes, who warned that he would refuse to take interventions from any male MPs who were not wearing ties, had made him feel “really upset and uncomfortable”.

He said he had taken these comments as “harassment”, even though they were not directed at him.

A spokesman for Hayes had failed to respond to a request for a comment by noon today (Thursday).

O’Mara said: “There has been other jeering when MPs have been not wearing a tie. It’s Neanderthal and bestial.”

He said he was also disturbed by the general “heckling and shouting” at fellow MPs that takes place in the Commons chamber during debates.

He said: “That comes under that umbrella of bullying and something I would like to take up, so people are more civilised while in the chamber and so they don’t make other people uncomfortable.”

He said that this kind of “very shrill, aggressive, intimidating environment” could cause problems for MPs who have anxiety or other mental health problems, and he warned that some MPs could even be avoiding the chamber because they do not find it a comfortable environment.

O’Mara said: “I just want to get some decorum and professionalism in the chamber and get it into the 21st century.”

He said the kind of “bully boy, public schoolboy rubbish” he had witnessed was “not right”, but many MPs were “ingrained in that culture”.

He said he wanted to “speak to anyone I can” to address the need for action on some of the barriers he and others were facing, and was planning to meet with the Commons speaker, John Bercow.

A House of Commons spokeswoman said that “bullying or harassment of any kind in the workplace is totally unacceptable and we are committed to creating an environment in which everyone is, at all times, treated with dignity, courtesy and respect”.

But although there are policies that have been drawn up to protect staff working in parliament from harassment and bullying, there does not appear to be any code of conduct that prevents such activity in the Commons chamber.

The MPs’ code of conduct refers only to financial interests and rules on lobbying, while a Respect policy refers to dealings between House of Commons employees, MPs and staff working for MPs, but makes no reference to behaviour in the Commons chamber, and the Valuing Others policy in the staff handbook applies to House of Commons staff and managers.

The House of Commons spokeswoman said: “The House has limited jurisdiction over MPs as it is not their employer.

“The political parties and the whips also have responsibility for ensuring that their MPs act according to these rules, and are likely to have policies outlining how they do this.

“Should an MP have a concern about bullying or harassment, they are able to write to the speaker, approach the commissioner for standards or speak to their party whips.”

She said the speaker can ensure MPs follow the rules during debates, by directing an MP to withdraw a remark, suspending a sitting of the House, suspending MPs or asking them to be quiet.

She said: “The style of debate in the House has traditionally been one of cut-and-thrust; listening to other members’ speeches and intervening in them in spontaneous reaction to opponents’ views.

“This style of debate can make the Commons chamber a rather noisy place with robustly expressed opinion, many interventions, expressions of approval or disapproval and, sometimes, of repartee and banter.

“Ultimately it is the chair, the speaker of the House of Commons, who controls the House and who speaks and when.

“Members have the right, when speaking, to be heard without unendurable background noise (deliberate or accidental) and the chair will call for order if it appears there is an attempt to drown out a member or when a number of members are leaving the chamber, or conversing loudly.”

On access, she said the House of Commons continues “to work towards making parliament more accessible to enable members of both houses and staff with disabilities to access facilities and fulfil their roles when working on the estate”.

She said the House of Commons was working with organisations including the Business Disability Forum, Action on Hearing Loss, and the National Autistic Society, and its own workplace equality network, ParliAble.

She said: “We are doing our best to adapt and find solutions to problems before they arise, and we are very keen to hear from anyone who may have suggestions about the ways we can develop and improve services for those working in or visiting parliament.

“We are always working to improve access (for example, a project to improve signage across the estate is currently underway), and whilst we recognise that there are always further improvements we can make, the pace and extent of change is of course limited by the age and nature of the building and the fact that we are operating within a grade II listed building and UNESCO World Heritage Site.”

She said: “I have spoken to Jared about the barriers that he has faced since arriving in parliament.

“He has rightly raised a number of serious issues which we are working with the parliamentary authorities to resolve as a matter of priority.

“The Labour whips have found Jared a room close to the chamber, and I understand that the Labour party are looking at what immediate support can be provided for Jared while he is setting up his parliamentary and constituency offices.

“As we set out in Labour’s manifesto with and for disabled people, access to political life is a vital part of breaking down the barriers that disabled people face in our society.

“Jared has rightly demonstrated that there is much more work to be done, particularly in terms of ensuring that the parliamentary estate and working practices are accessible to everyone.”

She said: “Stopping the hostile work environment would remove another barrier which deters would-be disabled politicians from seeking to enter the Commons.”

She added: “Disability Politics UK strongly supports Jared O’Mara MP in his effort to change the Commons’ policies and procedures which could in turn lead to a change in MPs’ behaviour.

“Freedom of political speech is one of the most highly protected forms of communication in international human rights law.

“However, that does not include the ‘right’ to create a hostile, intimidating work environment for fellow MPs.

“The speaker and the Commons have to act on Jared O’Mara’s proposals.” 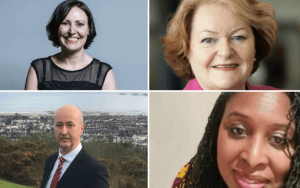