You are here: Home / Benefits and Poverty / Labour and Lib Dems give half-hearted welcome to DWP deaths evidence 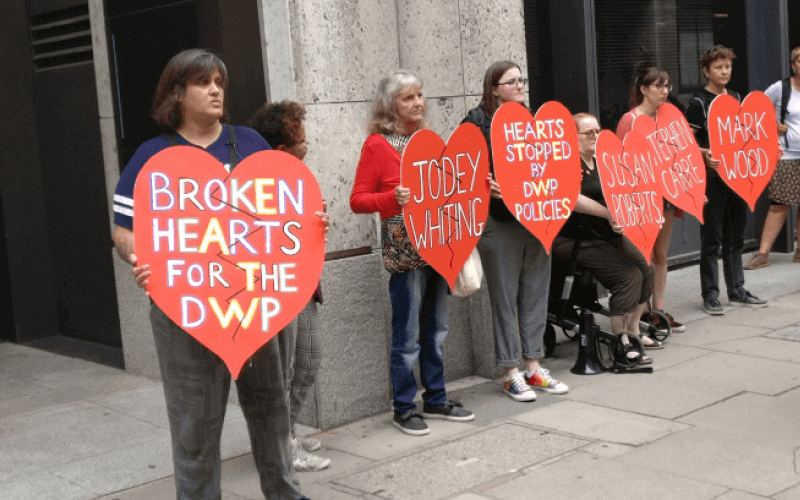 Political parties implicated in decades of government failings that have led to the deaths of countless disabled benefit claimants have given a half-hearted welcome to new research that brings together more than 30 years of evidence proving those links.

The draft version of the Deaths by Welfare timeline* currently features more than 300 pages of evidence linking the systemic failings of the Department for Work and Pensions (DWP) with hundreds, if not thousands, of deaths.

Despite a high-profile launch of the timeline last week, there was no mention of the research when work and pensions ministers answered questions in the House of Commons on Monday.

And no high-profile political figures have yet welcomed the timeline’s publication, despite it being featured in the Daily Mirror.

The only MP who appears to have raised the timeline in parliament or supported it publicly is Labour backbencher Debbie Abrahams, a member of the work and pensions select committee, who has led parliamentary efforts to secure a public inquiry into deaths linked to DWP.

Although the most damning evidence is linked to decisions made by post-2010 Conservative-led governments, both Labour and the Liberal Democrats are also implicated in many of DWP’s failings over the last 30 years.

It was a Labour government that introduced the work capability assessment, which has since been linked to hundreds, and probably thousands, of deaths.

And the Liberal Democrats were in coalition with the Conservatives between 2010 and 2015, during a period when many of the harshest policies on disability benefits were introduced, albeit by Tory ministers.

Coalition policies included the introduction of personal independence payment, which the Treasury stated in June 2010 (PDF) was aimed at producing “a 20 per cent reduction in caseload and expenditure once fully rolled out”.

This week, a spokesperson for Vicky Foxcroft, Labour’s shadow minister for disabled people, initially said that her office was “currently understaffed so won’t be able to provide a quote” about the timeline.

When challenged by DNS, she produced the following statement: “This report makes for troubling reading.

“Each of these cases is harrowing – our sympathies are with their families and loved ones.

“Lessons need to be learnt. We must ensure that we have a benefits system that provides people with security whilst treating them with dignity and respect.”

The Liberal Democrats produced a statement which also made no reference to the historical and systemic nature of the timeline and the decades of failings.

The Conservative government has so far refused to say whether it views the timeline as useful, or whether it accepts that the evidence shows links between social security policy and the deaths of claimants.

Instead, in a statement that mirrors Labour’s, it has spoken of “tragic, complex cases” and expressed sympathy with the families.

It said last week: “We support millions of people each year and in the vast majority of cases we deliver a supportive and compassionate service.

“We continually improve our services and have new teams to focus on our most vulnerable customers, ensuring we make the right decisions and people get support as quickly as possible.”

The draft timeline is already more than 300 pages long, even before evidence from the last eight months has been included.

It is based on more than a decade of investigations by disabled people’s grassroots groups, journalists, academics and other organisations and campaigners, and has taken more than a year to put together.

It shows how years of warning signs of the harm to come were ignored, while also demonstrating systemic negligence by DWP, a culture of cover-up and denial, and a refusal to accept that the department has a duty of care to those disabled people claiming support through the social security system.

Picture: Disabled artist-activist Dolly Sen (far left) and other campaigners take part in an action outside DWP offices in July 2019 which called attention to deaths linked to the department’s failings