You are here: Home / Benefits and Poverty / Labour conference: Abrahams says party will scrap WCA… but not sanctions 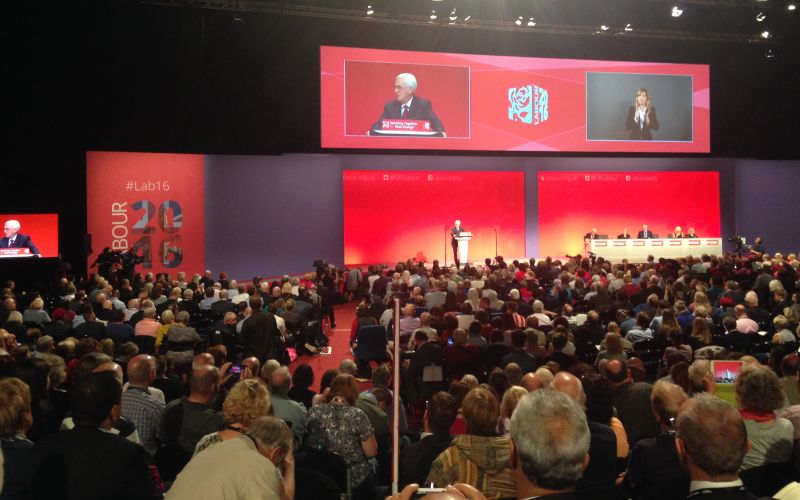 A Labour government would replace the “discredited” fitness for work test with a new assessment but it would not scrap benefit sanctions, the party’s shadow work and pensions secretary has admitted.

Debbie Abrahams told a delighted party conference in Liverpool this week that Labour would scrap the work capability assessment (WCA) – which Labour introduced in 2008 – and get rid of the government’s “punitive sanctions system”.

It was a pledge repeated by the newly re-elected party leader Jeremy Corbyn in his main speech to the conference, saying a Labour government would be “scrapping the punitive sanctions regime and the degrading work capability assessment”.

But Abrahams had already admitted to Disability News Service (DNS) that this did not mean that a Labour government would scrap all benefit sanctions.

She said the party’s pledge was only to scrap “the punitive regime introduced in 2012” through the Welfare Reform Act 2012.

She said: “There has always been conditionality. The sanctions regime we have got is not the one we want.”

Abrahams also declined to say if the party would scrap the benefit cap, which was introduced by the coalition government and tightened by the Conservative government elected last year.

Instead, she said: “I don’t think it is right that we have a system that is plunging children into poverty, principally as a result of the benefit cap.”

She suggested that DNS should focus on the party’s “direction of travel”, rather than details of social security policy.

She was also unable to promise to reverse the government’s controversial tightening of the eligibility criteria for the upper rate of mobility support – in the move from working-age disability living allowance to the coalition’s personal independence payment – from 50 metres to 20 metres.

Instead, she said: “What I have given is the direction of travel. Watch and listen to what we come forward with.”

Abrahams’ responses mean that the party currently has a less radical social security policy than the Liberal Democrats, who voted last week to scrap the WCA, all benefit sanctions, the PIP 20-metre rule, and the benefit cap.

Abrahams told the party conference that the government had “fostered an insidious culture of fear and blame to justify their programme of cuts, deliberately attempting to vilify social security claimants as the new undeserving poor”.

She showed the conference a trailer from director Ken Loach’s critically-praised new film I, Daniel Blake – winner of this year’s Palme D’Or at the Cannes Film Festival – because she said it “epitomises what is wrong with our social security system”.

As well as offering a fierce attack on the WCA system, a key plot development in the film centres around a single mother who is sanctioned for turning up a few minutes late for an appointment at a jobcentre.

Loach told DNS this week* that it would be a “hell of a result” if a Labour government scrapped the WCA.

When told that Abrahams was not promising to scrap sanctions completely, he said: “It seems at this stage she’s saying the right things.

“They asked permission to use the trailer and we were pleased to give it because I have got confidence in Jeremy Corbyn and the people he would choose.

“But if it would turn out that they had used it and then didn’t make substantial changes, we would have something to say about it.”

But he added: “They are not in power and won’t be in power for some years. I trust Jeremy’s good faith.”

Abrahams told the conference: “For those unable to work through illness or disability, we need to transform our social security to one that is efficient, responsive, and provides basic support.

“Time and time again, I hear how worthless the system makes people feel, even dehumanised.

“For the vast majority of people who have paid into it all their working lives, this is like a slap in the face. People often feel desperate, have been left destitute and have even died.

“I want to change the culture of our social security system and how the public see it.

“I believe that, like the NHS, it is based on principles of inclusion, support and security for all, assuring us all of our dignity and the basics of life were we to fall on hard times or become incapacitated; giving us a hand up, not a hand out.”

She said a Labour government would replace the WCA with a system based on “personalised, holistic support, one that provides each individual with a tailored plan, building on their strengths and addressing their barriers, whether skills, health, care, transport, or housing-related”.

Abrahams also said that the disability equality roadshow that she first launched last December, with events planned around the country, would now restart.

It aimed to ask disabled people for their help in designing a 21st-century social security system, and Abrahams told a fringe meeting this week that it demonstrated the party’s commitment to co-producing disability policy with disabled people.

*A full interview with Loach will be published by DNS next week. I, Daniel Blake will be released next month