You are here: Home / Activism and Campaigning / Labour conference: Anger at party’s failure to pledge to scrap universal credit 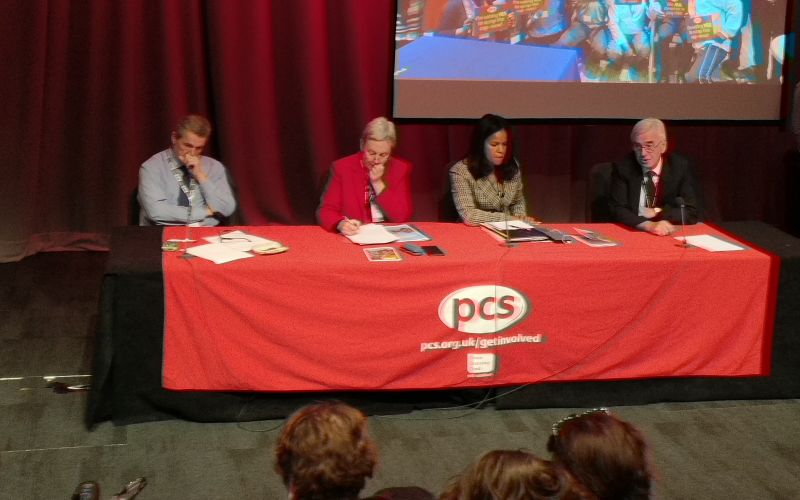 Labour is facing mounting anger from disabled anti-cuts activists over its refusal to call for the government’s universal credit benefit system to be scrapped.

Much of the anger has been directed at shadow work and pensions secretary Margaret Greenwood, who instead of pledging to scrap universal credit – at Labour’s annual conference in Liverpool this week – announced a lengthy review of social security policy.

It comes little more than a year after a disability equality roadshow – led by her predecessor Debbie Abrahams – covered many of the same issues and asked disabled people across the country what they would like to see from a new social security system.

But anger has also been directed at the unions.

Earlier this month, trade unions voted at the annual TUC Congress to call on the Labour party to shift its policy stance and promise to scrap universal credit.

But this week, two unions appeared to retreat from that pledge by putting their names to a motion to the Labour conference that called instead for a “fundamental overhaul” of universal credit.

The motion was moved by USDAW and seconded by GMB.

Paula Peters, a member of the national steering group of Disabled People Against Cuts (DPAC), said DPAC would “hold Labour to account” and “if need be we will take the fight to them”.

She said: “The anger is building and it is palpable.

“The mantra ‘for the many, not the few’ is ringing a bit hollow at the moment. I don’t think it applies to people who are unemployed or disabled people.”

She said the actions of the unions in moving and seconding a motion that called for university to be paused and fixed – just weeks after voting for it to be scrapped – was “a massive slap in the face”.

As a result of Greenwood’s “lacklustre” speech, which Peters said was “another fudge”, DPAC is calling on campaigners to write to the MP – and Labour leader Jeremy Corbyn, shadow chancellor John McDonnell and shadow minister for disabled people Marsha de Cordova – “about how they feel about Labour not stopping and scrapping universal credit and what they felt about her speech”.

Greenwood explicitly called in her speech (watch from 2 mins 15 secs) for the government to “stop the rollout of universal credit and fix its many flaws” rather than for it to be scrapped.

Senior figures in the party, including McDonnell, de Cordova, and Greenwood, all suggested to varying degrees during the week that the party was moving closer to calling for universal credit to be scrapped, but none of them said that explicitly.

Greenwood told the Mirror that scrapping universal credit was “something we’re sort of in the process of looking into” and that the party was not ruling it out.

But de Cordova, who was the most outspoken of the three, told DNS (see separate story): “I believe Labour needs to come up with its own alternative.

“The party are not quite as close [as I am] to saying stop and scrap but you know what, if something isn’t working maybe there is no value in tinkering at the edges.”

McDonnell told a fringe event hosted by the PCS union: “There are discussions about what we do about universal credit, do we scrap it or reform it or whatever.

“Some of this is semantics. It needs transformation in a way that enables people to operate an effective and efficient system, both from the staff point of view and the claimants’ point of view, but also we’ve got to find the resources that lift people out of poverty.

“So our job now in the coming months, and all of you will be engaged with this, is how do we redesign the system so the net is effectively lifting people out of poverty and is effective in ensuring no-one falls through that net. That’s the challenge that we have got.”

McDonnell (pictured, right, with Greenwood, second from left) said later in the fringe, in answer to a question about universal credit: “All the messages we are getting at the moment is that this is a system that just doesn’t work, won’t work, and therefore not only needs reform but needs replacing.

“That is the debate that we will have as we go forward.”

But Peters told Disability News Service that disabled people and others were going to get “walloped” by the migration of existing claimants – including those on employment and support allowance – onto universal credit from next year.

She said: “They have missed a really good opportunity to announce they are scrapping universal credit.”

“We don’t need words from Labour, we need action. We are fed up with meetings and talking and little from it. Words are meaningless, we want action, not words.” 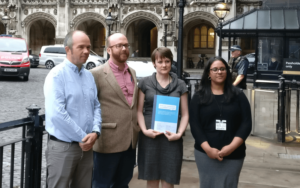