You are here: Home / Benefits and Poverty / Labour conference: Call for union action over DWP staff who ‘take pleasure in sanctions’ 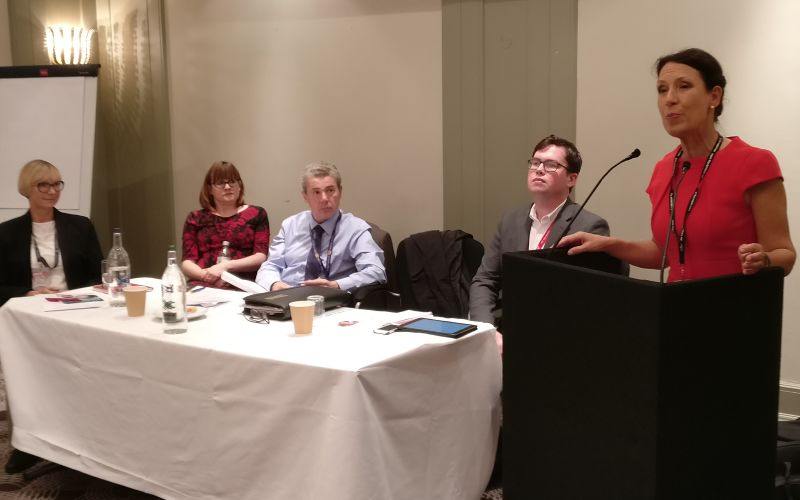 A leading disabled activist has asked the head of one of the country’s largest unions to take action over jobcentre staff who appear to enjoy handing out sanctions to benefit claimants.

The exchange took place at a fringe meeting organised by the Public and Commercial Services (PCS) union – which represents most jobcentre workers – at this week’s Labour conference in Brighton.

Mark Serwotka, the union’s general secretary, was told by Paula Peters, from Disabled People Against Cuts (DPAC): “There is a lot of anger with a lot of claimants around some jobcentre workers who are quite enjoying sanctioning a little bit too much.”

She said these claimants wanted to know what action the union was taking to try and reduce the rate at which claimants were being sanctioned – having their benefits stopped for a period of time as a punishment for refusing to meet strict work-related conditions – and whether PCS had considered a “name and shame policy to get this stopped”.

Serwotka (pictured, second from left, at the fringe) said: “I am representing some of the lowest-paid workers in Britain, some of them have been physically attacked, some of them are blamed for what they have to do.

“If you are a worker and you are earning under £20,000 delivering a pretty shitty system, there is a lot of pressure on you, with the worst management I think anywhere in the public sector – they have sacked people in DWP who have cancer – so this is an organisation where it takes an awful lot of guts to stand up.”

But he agreed that some members “perhaps have been or do buy into the ideology of what they are doing”.

He told the fringe meeting – also attended by Labour’s shadow work and pensions secretary Debbie Abrahams – that he had visited jobcentres where it was clear from posters on the walls and “conversations people have to have with their management” that managers were trying to persuade staff that imposing sanctions was “the right thing to be doing”, in a bid to win their “hearts and minds”.

Peters told Serwotka that DPAC had been blamed for intimidating PCS members who worked in jobcentres, but she said: “We don’t do that, we don’t believe in that.”

And she asked him how they could bring the two factions together, following displays of anger between jobcentre staff and claimants.

Serwotka appealed for “unity” between disabled activists, claimants and his members who worked in jobcentres.

He said: “At the moment, our members are demoralised by the fact that they are judged by the amount of people they sanction and how many people they push through the system.”

He said he knew that some jobcentre staff, as well as some people in wider society, had “fallen for the divide and rule stuff” on benefit claimants.

But he said: “The best way to tackle that is for us to be as united as we can, which is why I hope we continue that.

“I hope something comes of this meeting and we can take this forward.”

Serwotka had earlier called for a social security system that was based on “dignity and respect” and “not one obsessing about free market economics and the private sector and conditionality”.

He warned that the “political consensus” had “undermined” the welfare state over the last 30 years, and he claimed that the Tony Blair government had done as much as any to “split working people from benefit claimants”.

He said the service offered to benefit claimants at jobcentres now was “a million miles away” from the one provided in 1980, when he was working for the old Department for Health and Social Security (DHSS).

And he said he hoped for a debate that would lead to a social security system that staff could deliver “with some passion and pleasure”, as they had been able to when he worked for DHSS.