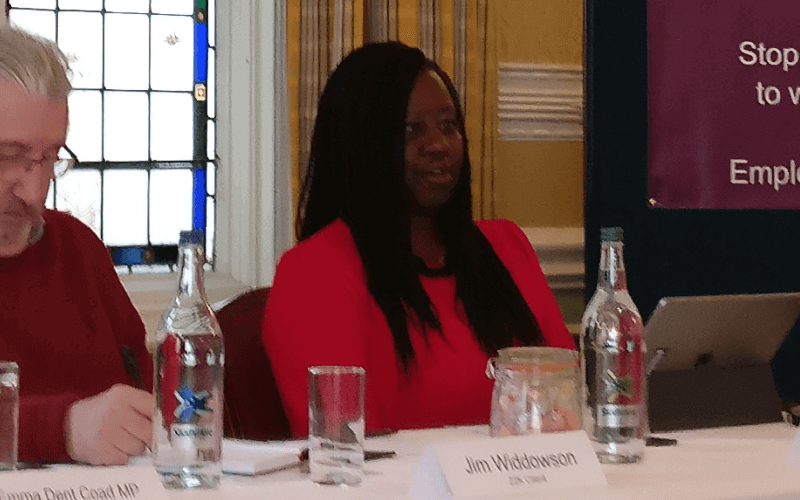 A disabled shadow minister has accused the public body that provides MPs with financial support of “oppression” and “discrimination”, after it refused to meet some of the disability-related costs of doing her job in parliament.

Marsha de Cordova described the “worry, anxiety, stress and tears” caused by the actions of the Independent Parliamentary Standards Authority (IPSA) as she tries to perform her duties as a constituency MP and Labour’s shadow minister for disabled people.

De Cordova, who has a visual impairment, was speaking at a fringe event organised by Disabled People Against Cuts as part of The World Transformed, a four-day festival that ran alongside Labour’s annual conference in Brighton this week.

The meeting was called Piss on Pity: Disability Oppression, and De Cordova said of the title: “We do need to talk about this.”

She said she had decided to discard the speech she had been planning and talk instead about her recent experience of oppression in the House of Commons.

She said 2019 had been “a challenge” as a disabled MP, and she added: “As a disabled MP I should have the right support, and reasonable adjustments need to be made.”

She said that IPSA had failed to pay for the extra paper and ink costs she faces because she has to print out documents in large print, including the speeches she makes in the Commons.

She told activists she had had to “fight” with IPSA over the issue.

She said: “They did actually say, ‘yeah, we know you might have extra costs, but we are not going to meet those costs.’

“That is blatant discrimination and they thought it was OK to treat somebody like that.”

But these are not the only extra costs IPSA has refused to meet.

After de Cordova was appointed as a shadow minister in October 2017, IPSA agreed to fund an extra staff member – after receiving a letter from the parliamentary occupational health service, which supported her request – to provide the support she knew she would need as a disabled person to do her job as both a constituency MP and a shadow minister.

But earlier this year, IPSA told her it had made “an error” and withdrew the funding for the staff member.

As a result of that decision, she has been forced to make the staff member redundant.

She said: “We talk about oppression and that is oppression.

“We are in the process of trying to work out some solutions, but I should not have been oppressed and put through what they put me through.

“They have caused me much worry, anxiety, stress, tears.”

She told the meeting: “Until society and the institutions are going to understand disability, we will not make any progress.”

IPSA refused to answer questions from Disability News Service about the case, because it said they related to de Cordova’s “personal data”.

Among the questions were how it responded to claims that it was guilty of oppression and discrimination, why it changed its mind about paying for a support worker, and whether it accepted that it had discriminated against de Cordova under the Equality Act.

It also refused to say what actions it would take to ensure it did not discriminate against other disabled MPs in the future, and what message its actions sent to other disabled people considering a career in politics.

In its statement, it claimed that it “works closely with MPs and their staff to ensure that funding is provided to support their parliamentary and constituency work, in line with the rules”.

And it claimed that it supports “comprehensive assessments of the specific needs of MPs and their staff, so that any reasonable adjustments, in line with Equality Act legislation, can be identified and quickly funded to help MPs in their jobs.

“IPSA has an uncapped Disability Assistance Fund for costs and reasonable adjustments that are reasonably attributable to a disability of an MP, a member of their staff, a volunteer, a job applicant or constituent visiting the MP’s office or surgery.

“IPSA fully supports a diverse parliament. IPSA is committed to adhering to all equality legislation, and to supporting all MPs fairly.”

Pictured: Marsha de Cordova at a Z2K fringe event in Brighton this week