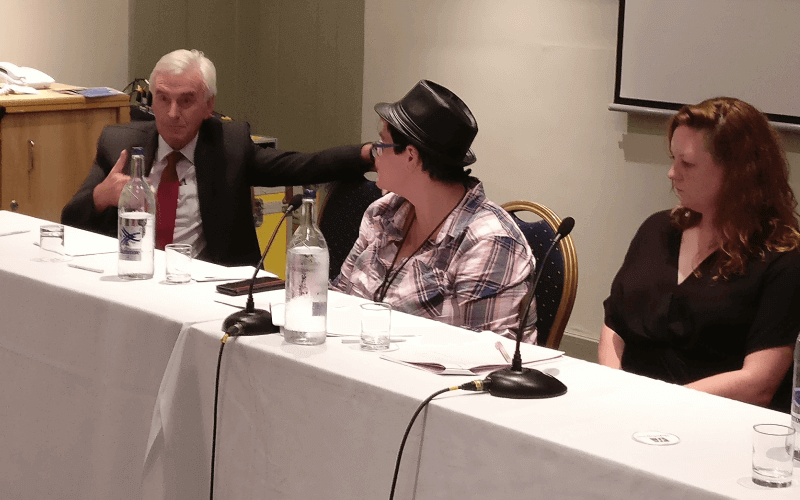 Labour’s shadow chancellor has told disabled party activists they need to “eyeball” senior figures in the party who have not done enough to take on board the policies outlined in their new neurodiversity manifesto.

John McDonnell was speaking to members of Neurodivergent Labour (NDL) at a fringe meeting held to launch the manifesto at the party’s annual conference in Brighton.

McDonnell (pictured, left, at the fringe meeting), who has played a key role in enabling the launch of NDL and supporting the development of its manifesto, said there had not yet been much interest shown by Labour MPs and other frontbench shadow ministers.

He said: “Janine [Booth, convenor of NDL’s manifesto group] and others have been offering briefings to individual shadow frontbench teams, and there wasn’t an awful lot of take-up.”

He said this was because shadow ministers were under pressure and focused on their own briefs.

But he said: “What we have got to do now is make sure, in the run-up to the general election, whenever it comes, that we get reinserted into [Labour’s] national manifesto a recognition of neurodiversity and the challenges and opportunities of that.”

He said: “I think we should use the coming period as an opportunity to lock down commitments within the Labour party for change and then broaden the debate and campaign around it.”

He said he did not blame colleagues in the party for their lack of involvement, because of the pressures they faced.

But he said there was a need now for NDL to “face up and eyeball people” in the party and for the party to “get a move on”.

He added later: “I don’t think we have gone far enough or fast enough, so we have to really renew that and get on with it.”

Booth told the launch meeting: “We think if these policies are enacted as a whole by a Labour government it will radically improve the lives of autistic, dyspraxic, dyslexic and other neurodivergent people in this country.”

She introduced the manifesto’s five key principles: that it is based on the social model of disability; that it has a “neurodiversity” approach that accepts that there are “many different brain wirings, many different brain structures” and that “humanity as a species is naturally neurologically diverse”; and that it opposes austerity, including cuts to services such as support for neurodivergent students in mainstream education.

The fourth principle is that it is a “Labour” manifesto, based on Labour values of socialism, solidarity and democracy; and the fifth is that it is based on “nothing about us without us”, so “neurodivergent people ourselves can speak about what our experiences and needs are”.

Abi Moorcock (right), a member of the manifesto group, described seven key areas where neurodivergent people are facing hostility: securing a diagnosis; independent living, services and social security; education; barriers to work; prejudice and discrimination, including bullying and hate crime; problems with the justice system, including prisoners who should receive support rather than being in custody; and the failure of research into understanding and supporting neurodivergent people.

Emma Dalmayne, a member of the manifesto group and an activist who campaigns to raise concerns about “quack cures” for autism, said in response to a question from a Labour councillor that the proportion of the population diagnosed as neurodivergent has only been increasing because of “more awareness and better diagnostic tools and tool kits”.

She said: “We have always been here, but we were seen as the weird, the kooky, the eccentric, the loner, the oddball.”

Booth (centre) added: “There has always been a variety of brain wirings, but the things that have changed socially make those more of an issue.”

Among key polices in the manifesto are to scrap the work capability assessment; to ensure that local authorities carry out the requirements of the Autism Act through decision-making forums that include representatives of autistic people; and to provide the support necessary to enable independent living, including “the need to get more autistic people out of ATUs [assessment and treatment units]”.

The manifesto calls for neurodiversity training for all staff in public services; smaller class sizes, and education about neurodiversity in the school curriculum; and reversing the cuts to special educational needs funding.

It also calls for a new legal requirement on employers to make their workplaces “more equal and accessible and less hostile”; for legal changes to ensure anti-discrimination laws apply to volunteers as well employees; and for measures to ensure the built environment is less distressing.

Other manifesto measures include introducing new laws to ban quack cures, such as MMS (a type of bleach) which harm autistic and other neurodivergent people; to make neurodivergence a new protected characteristic under the Equality Act, with the same protections as disability; and to ensure that “non-harmful unusual behaviours” are not criminalised by the justice system.

He said the issues included in the neurodiversity manifesto should be raised with the party because it was “the right thing to do”.

But he also pointed out that “in pure electoral terms, the number of individuals and families who are dealing with issues of neurodiversity is enormous”, and so a commitment to those policies in Labour’s next general election manifesto would “shift a large number of votes”.

He said: “We need to reinvigorate our representations within the party [and] make sure we get a full recognition within the manifesto itself.

“The resource demands are pretty enormous as well. We have to accept that [but] we might as well confront that early rather than later.

“An amount of investment now does actually in the end, in crude terms, save money at a later date.

“There have been too many cases we have dealt with where issues not tackled have resulted in family breakdown, and people being placed in institutions inappropriately, often very expensively as well.”

Neurodivergent Labour is now set to hold its first agm in London in late November.

Booth said after the meeting that McDonnell was trying to secure an invitation for NDL to discuss its manifesto with the party’s National Policy Forum, as the next stage of persuading Labour to adopt it as party policy.