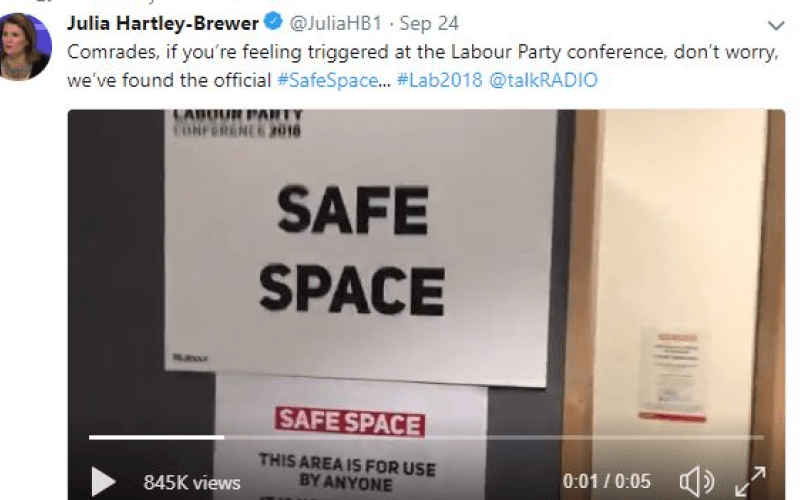 Disabled party members are calling on Labour to ban a prominent right-wing journalist from future events after she posted a video on social media mocking the provision of a “safe space” used by disabled people at this week’s party conference.

The party has told Disability News Service (DNS) that the behaviour of Julia Hartley-Brewer “caused considerable distress” to people at the conference, including disabled party members with autism and anxiety conditions.

Hartley-Brewer had been filmed sitting in the safe space – which is put aside for disabled people and others who need a quiet area for impairment-related and other reasons – and then saying “boo” as a colleague with a camera entered the room.

Alongside the video, Hartley-Brewer – who was presenting her breakfast show live from the main conference venue – wrote on Twitter (pictured): “Comrades, if you’re feeling triggered at the Labour Party conference, don’t worry, we’ve found the official #SafeSpace…”

She later tweeted in response to criticism: “Ooh, I’ve committed one of those hate non-crimes we’ve heard so much about.”

Hartley-Brewer, who has about 120,000 Twitter followers, continued to refer to the incident dismissively, including yesterday (Wednesday), when she tweeted: “Nah, I’m sitting through the [Jeremy Corbyn] speech in my #SafeSpace. On a train heading home.”

One autistic party member, Rebecca*, told DNS this afternoon (Thursday) how she had seen Hartley-Brewer’s video on Twitter.

She said: “I used it to chill out. It really helped.”

But she then saw Hartley-Brewer’s Twitter message, which she said left her feeling “humiliated and violated”.

She was supported by Disability Labour, which represents disabled party members, after turning up in distress at its conference stand.

She said she came across the stand and “just burst into tears, shaking with anger and rage”.

She praised the support she was given by Disability Labour and said she was now set to report the incident to the police as a potential disability hate crime.

A second disabled member also told Disability Labour that he believed the room was no longer a “safe space” because of Hartley-Brewer’s actions.

Hartley-Brewer has refused to apologise, although she tweeted: “I’m told that this ‘safe space’ at Labour conference is meant for people with autism and other disabilities. The sign doesn’t say that.

A sign on the door, which either Hartley-Brewer or her colleague photographed, refers to “urgent medical treatment”, the party’s “safeguarding unit” and “safety or welfare” concerns, while information about the safe space was included in the accessibility information pages for disabled people of the main conference guide, sent out to all journalists attending the event.

A spokesman for talkRADIO has refused to comment or to say if the station plans any disciplinary action against Hartley-Brewer.

But Dave Townsend, a vice-chair of Disability Labour, said Hartley-Brewer had “violated” the safe space.

He said Rebecca had been “very distressed. It took a good hour to get her to calm down.”

And he said he was concerned that Hartley-Brewer’s actions could encourage similar behaviour from her supporters in other venues and at other conferences.

He said Disability Labour executives had told the party’s conference arrangements committee during a lengthy meeting yesterday morning that they wanted to see Hartley-Brewer expelled from the conference and banned from future Labour events.

Despite the row, Hartley-Brewer hosted her morning show on talkRADIO live from the conference on Wednesday morning.

A Labour spokeswoman told DNS in a statement: “During conference, the Labour party received a number of complaints about talkRADIO presenter Julia Hartley-Brewer’s behaviour during conference, which we looked into immediately.

“It became apparent that she had caused considerable distress to vulnerable groups, including to delegates with conditions including Asperger’s, autism and anxiety disorders.

“Representations were made to talkRADIO and to Julia Hartley-Brewer directly.

“A clarification was made by the presenter, but material considered offensive remains on social media and neither the party nor those affected have received an apology.

“The party is taking this incident up further with talkRADIO.”

She added: “The Labour party prides itself in high standards of inclusivity and we do not tolerate abuse or discrimination.

“We have made improvements in our support for disabled delegates to ensure our conference and events are as inclusive and accessible as possible, which this year included accessibility stewards in the conference hall and the usual provision of a safe space, among other things.”

Townsend said that Hartley-Brewer had been “mocking the idea of vulnerable people needing a safe room”.

He said: “I was absolutely apoplectically angry that somebody could violate a place put there specifically for someone having a vulnerable moment or some quiet away from the crowds.

“We think it was signed well enough for her to know it was a room for safeguarding vulnerable people.

“It is nothing less than a hate crime against disabled people in vulnerable situations, especially those who are neuro-diverse or have mental health issues.

“Everybody in the party is sickened that this happened. It is beyond belief that she thought this was a reasonable thing to do.”