You are here: Home / Activism and Campaigning / Launch of Neurodivergent Labour ‘could be milestone in fight for rights and equality’ 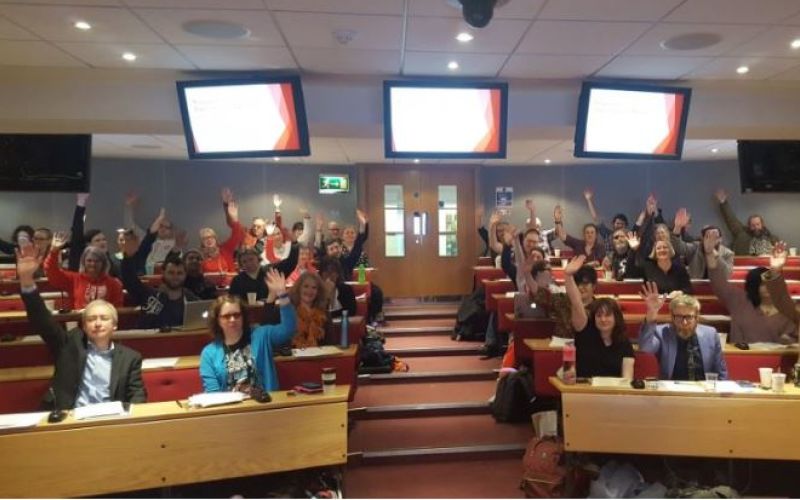 The launch of a new user-led political organisation is set to be a “landmark event” for neurodivergent people in the Labour party.

Janine Booth, co-chair of the TUC disabled workers’ committee, who played a key role in its formation, told the launch event it would be “a milestone in the fight for acceptance, rights and equality for autistic, dyslexic, dyspraxic and otherwise neurodivergent people through the Labour party”.

More than 50 neurodivergent party members backed the new organisation’s aim to campaign against discrimination, exclusion, oppression and injustice and for equality for neurodivergent people.

The new organisation, which will hold its founding annual general meeting later this year, will also work to make the Labour party itself more accessible to its neurodivergent members.

“So we want to fight to make our party more accessible.”

Those present at the launch also endorsed a draft Labour party autism/neurodiversity manifesto, which Booth and others have been developing for nearly three years.

The manifesto is based on the social model of disability, and an understanding that neurodiversity should be accepted and not suppressed or cured, and comes from an anti-austerity perspective that also sets out to challenge “the deep social routes of discrimination against neurodivergent people”.

It addresses issues around the lack of diagnostic services, the impact of Tory social security cuts and reforms, including neurodivergent people driven to suicide by benefit sanctions, and the crises in social care and housing.

It also highlights a level of hate crime that has “increased with the demonisation of people who are disabled and/or different in pursuit of the Tories’ austerity agenda”.

It calls for legislation to outlaw “quack” cures, such as the “false and dangerous” sale of products that “exploit the fears of neurodivergent people and their families”.

Campaigner Emma Dalmayne told the launch event that she welcomed the inclusion of this measure in the draft manifesto.

She said: “I’ve been campaigning against autistic mistreatment with abusive quack cures for the last five years here in the UK.

“I have literally felt alone for so long. I’ve had so many threats, I’ve had rape threats, death threats, and threats against my family, so I just wanted to say thank you.”

The manifesto also calls for action to make the built environment “less distressing and more accessible”, and for a campaign to raise public awareness of neurodiversity.

And it says there should be a review of the accessibility of the justice system, and action taken to ensure that “non-harmful unusual behaviours are not criminalised, and that people receive support rather than punishment if an intolerable environment causes disruptive behaviour”.

Other policies include neurodiversity training for all teachers and teaching assistants as part of their “core training”; support for neurodivergent students; smaller class sizes; and neurodiversity to be included in the school curriculum.

It also calls for the work capability assessment to be scrapped; for neurodiversity training for all public service staff*; and for a new legal requirement on employers to make workplaces and working conditions “more equal and accessible and less hostile”.

Booth said there had been input into the draft manifesto from thousands of people from within the party, trade unions and the neurodiversity movement, under the guidance of a steering group composed entirely of neurodivergent party members.

She said the draft manifesto had “a set of radical, progressive policies that would significantly improve the lives of neurodivergent people”, and when it was formally adopted by the Labour party “we need to go and tell neurodivergent people that, and say, this is what you will get if you elect a Labour government”.

She said: “We want this organisation to be not just a talking shop, not just to have conferences each year, but to actually go out on the streets and campaign.”

The idea of a Labour neurodiversity and autism manifesto was first suggested by Booth to John McDonnell nearly three years ago, and the shadow chancellor was at the launch event.

McDonnell said it had previously been “pretty bleak” for neurodivergent people within the party who needed support, advice or wanted to push for legislative change.

He said it had been crucial that the new organisation was led by neurodivergent people.

And he promised again that disabled people would be involved in implementing policy when Labour won power.

He said: “As I keep repeating, this is not about electing a group of MPs who will go off and do it for us. That will never work, it never has and never will.

McDonnell said his shadow Treasury team would be starting a new exercise next month in which they will recost key policies, in preparation for a possible general election.

He said he wanted the party to insert the issues raised in the draft autism/neurodiversity manifesto into that discussion.

“I think if we can get the debate going early… we can go into government with the implementation plans there, the draft legislation in place, and the funding resources available too.

“You can see how we could transform people’s lives.”

Helen Whitehead, who stood unsuccessfully to be Labour’s prospective parliamentary candidate (PPC) in South Thanet last year, said she believed the idea of setting up Neurodivergent Labour was already working.

She said: “I stood for PPC in South Thanet last year and I did so as an autistic woman, because I was aware that nationally we were becoming more aware of what our abilities are, that we are welcomed by the party, that we are more than capable.

“I did this because I was aware of everything that was happening, so I would just like to thank everybody and point out that you are already doing what we are setting out to put forward today and I think it is absolutely incredible.”