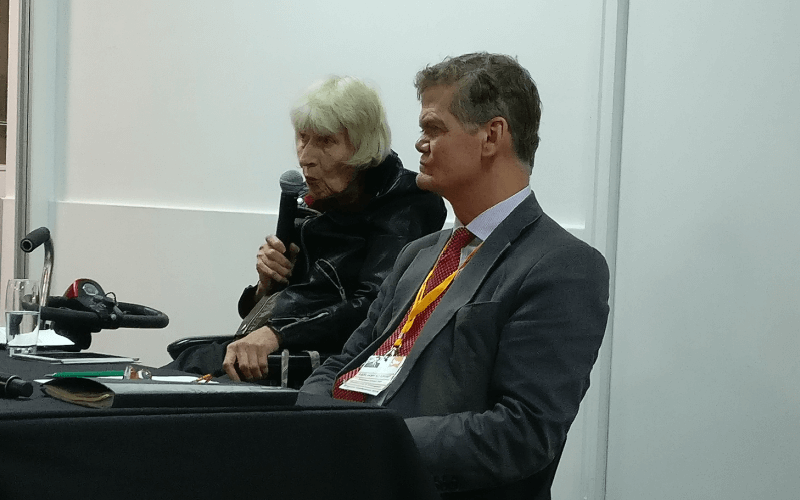 A Liberal Democrat MP who has supported Tory former work and pensions secretary Iain Duncan Smith has admitted he gave him “more benefit of the doubt” than he should have done during the five years of the coalition government.

Stephen Lloyd, who served on the Commons work and pensions committee while Liberal Democrat ministers were serving in the coalition government between 2010 and 2015, has previously defended Duncan Smith.

And during this week’s annual party conference in Brighton, he told a fringe meeting that Duncan Smith had had some good ideas about the importance of employment in addressing disadvantage but had been undermined by right-wing papers like the Daily Mail publishing stories about benefit “scroungers”.

When asked later about this statement by Disability News Service (DNS), Lloyd (pictured at a fringe meeting with Liberal Democrat peer Baroness Thomas) said he had challenged Duncan Smith in parliament on his inappropriate language.

But he insisted that DNS was only “half right” in suggesting that Duncan Smith was responsible for whipping up hostility in tabloid papers like the Mail.

DNS then repeated comments Duncan Smith had told The Sun in late 2010 in which he said he had been “appalled” at how easy it has been in the past for people to claim incapacity benefit and cheat the system and said that Sun readers were right to be “upset and angry” when they saw neighbours who do not work.

Duncan Smith also told the Sun that Britain had “managed to create a block of people” who “do not add anything to the greatness of this country” and had “become conditioned to be users of services, not providers of money.

“This is a huge part of the reason we have this massive deficit.

Lloyd said again that he had challenged Duncan Smith over the language he had used.

But he said he now acknowledged that in his own zeal to see more people in work, he could have overlooked the harm caused by Duncan Smith and his supporters.

He said: “I think I did and I acknowledge that. In recognising that Iain Duncan Smith got the importance of jobs I can see that in coalition there were times when I would have given him more benefit of the doubt than I should have done.”