You are here: Home / Politics / May promises to address mental health ‘burning injustice’… but fails to fund her pledge 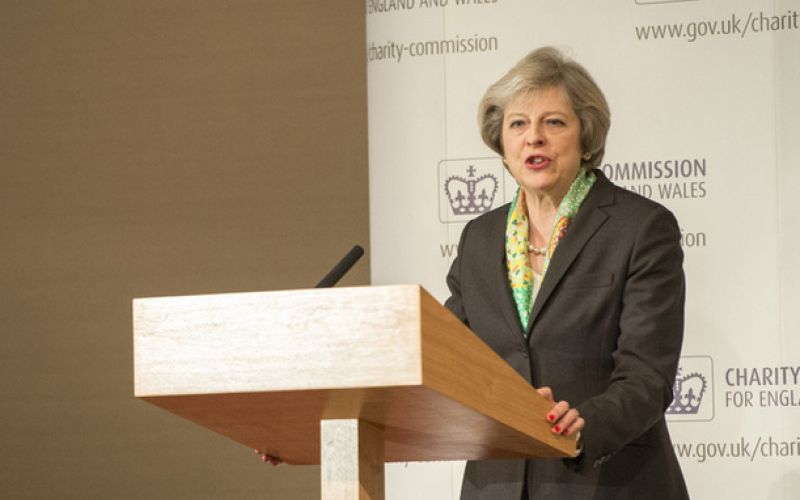 The prime minister has been criticised for offering less than £20 million in new funding to go alongside a string of announcements on how her government will address the “burning injustice” of how society treats mental ill-health.

Theresa May used the package of measures that she said would “transform” mental health support in schools, the workplace and the community to illustrate what she said was her “commitment to building a fairer society”, in a high-profile speech (pictured) at the Charity Commission’s annual meeting.

But she also announced a new review of support for employees with mental health problems, which will include an examination of workplace discrimination.

And in one of only two announcements to be accompanied by new funding, May said an extra £15 million would pay for new health-based “places of safety” in the community, such as “crisis cafes” and community clinics, which will “provide and promote new models of community-based care” and prevent people who have been detained under the Mental Health Act from being locked up inappropriately in police cells.

May also pledged to “speed up” the government’s programme to expand digital mental health services, so that “those worried about stress, anxiety or more serious issues can go online, check their symptoms and if needed, access digital therapy immediately rather than waiting weeks for a face-to-face appointment”.

And she said the Department of Health (DH) would review the debt and mental health evidence form.

Service-users in debt are currently charged up to £300 by their GPs to fill in the form to prove they have a mental health problem, so that creditors can make adjustments to how they deal with their case.

A DH spokesman confirmed to Disability News Service yesterday (Wednesday) that May’s announcements included only £18 million of new money, with the £15 million for new places of safety and £3 million for a pilot to trial digitally-assisted therapy, while the level of investment for mental health first aid in schools was “still to be determined”.

Most of the reaction to May’s announcements from disabled activists with experience as mental health service-users was highly critical of the failure to provide substantial new funding.

Alisdair Cameron, co-founder of the Recovery College Collective (ReCoCo) and team leader of the Newcastle mental health service-user organisation Launchpad, said May’s announcements suggested “an exercise in branding”, while “many of the more challenging aspects of mental health were conspicuous by their absence”.

He said: “I think what’s very interesting is what wasn’t mentioned: lots on preventative work, nothing substantial for those who’ve developed severe or enduring problems, lots on children and young people, nothing significant for adults.

“Mention of workplaces and depression and anxiety, nothing for those unable to work because of profound problems and distress.

“It’s as if a demarcation has been drawn between the saveable and the damned, the deserving and the undeserving.”

He added: “Also absent was any meaningful monetary commitment, and the strongest likelihood is that the announcements will mean next to nothing in practice, but they’re made to signal that this prime minister and her government care.

“Not enough to spend, but to express how much they care.”

Professor Peter Beresford, co-chair of Shaping Our Lives, said: “The message doesn’t seem yet to have got through to this government that making major policy announcements which aren’t linked with major new funding or listening to the concerns of the people most affected is a key reason why more and more people feel politically disaffiliated and excluded from mainstream politics.

“This is exactly the situation with this week’s mental health announcements.”

Paula Peters, a member of the steering group of Disabled People Against Cuts and a member of the Mental Health Resistance Network (MHRN), said May’s words were “hollow”, with the focus on mental health first aid in schools rather than access to “tailored, individualised support” and under-funded child and adolescent mental health services.

“Children desperately need the support and they can’t get access to it. It is hollow words from Theresa May.”

Another leading campaigner, Dawn Willis, said on Twitter: “#mentalillness trending because Theresa May says she wants to tackle STIGMA. Think I’d prefer she tackled service funding and saved some lives.”

Alastair Campbell, Tony Blair’s former Downing Street communications director, said on Twitter that his “big worry on #mentalillness is that politicians see improved attitudes re stigma as a substitute for the services needed”.

He said that although May was saying “a lot of the right things” on mental illness, he was concerned that the government’s line was that “it’s not all about money”.

He added: “Of course it is not ALL about money. But a lot of it is. And services are being shredded in some places.”

She said: “It’s good to see such high level commitment to addressing injustices faced by people living with mental health issues – but the proof will be in what actually happens.

“It’s welcome that the prime minister has talked about discrimination in the workplace, and the important roles of schools and employers: this is a positive shift from more usual discussions of mental health that focus only on treatment, as though all people need for a good life is a service (not rights, not social participation, not money – just a medical model solution).”

But Sayce said there were still “a lot of injustices to tackle”, such as “the social care crisis that means many people are stuck in psychiatric wards for no good reason, when they don’t want to be there; the ever increasing use of compulsory detention and treatment, especially in relation to black men; and the continuing use of seclusion and restraint, which can significantly damage well-being and trust”.

And she added: “We need to be confident that the action will genuinely address the injustices.

“With relatively few new resources, and a significant set of issues to address, we need regular progress reports to assess what impact the new measures are having.“

Norman Lamb, the Liberal Democrat shadow health secretary and a former care services minister in the Tory-Liberal Democrat coalition, said May’s announcements amounted to “a puny response to a burning injustice and an attempt to cover up for this government’s failure to deliver on promised investment for children’s mental health”.

He said the measures to improve mental health care in schools had already been agreed during the coalition, and the current government had “failed to ensure the investment needed to implement them has got through”, while much of the extra £1.4 billion of funding already secured for child mental healthcare was “being diverted to prop up other services”.

He said: “Unless the government addresses the funding crisis facing the NHS and ensures extra investment gets through to where it’s needed, we will not see the improvements in mental health care that are so badly needed.”

“We have also made a record £1.4 billion of additional investment for children and young people’s mental health and eating disorders over this parliament.

“We know change will not happen overnight but all local areas must provide detailed plans of how they will transform services and their performance is being measured carefully and transparently.”

Meanwhile, there was praise from Deborah King, co-founder of Disability Politics UK, for May’s decision to highlight the importance of mental health first aid training in her speech.

She added: “She was right to remember Kevan Jones MP and Charles Walker MP as examples of politicians coming out about mental ill health, which helps to reduce stigma.

“We would urge Theresa May and Jeremy Corbyn to whip their MPs to attend mental health first aid training themselves.

“This would enable them to be more supportive to their constituents, fellow MPs and Commons staff.

“They would also gain a better understanding of mental illness, which would enable them to make better policy.”

Alongside May’s announcements, the government published its response to last year’s report from its Mental Health Taskforce, accepting in full the relevant recommendations.

As well as health, the government accepted recommendations on social work, mental health research and data, the criminal justice system, housing, and stigma.

Recommendations on employment included a call for an expansion of the much-criticised policy to integrate employment advisers into psychological therapy services, while the taskforce report also included the controversial conclusion that “employment is vital to health and should be recognised as a health outcome”.