You are here: Home / Independent Living / Minister appears unprepared for impact of ‘no deal’ Brexit on social care 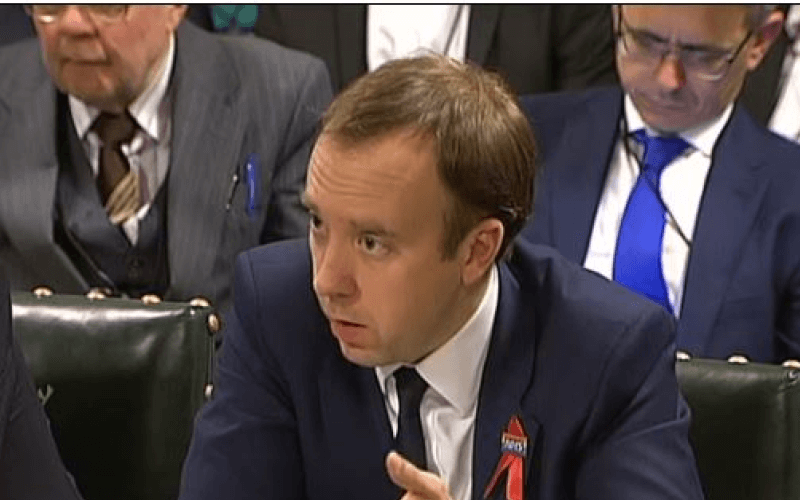 The health and social care secretary appears to have accidentally confessed to having no plans for dealing with the worsening social care recruitment crisis that is almost certain to hit the UK if the country is forced into a no-deal Brexit.

Matt Hancock was asked by a committee of MPs on Tuesday about the prospect of the UK leaving the European Union (EU) next March without agreeing a deal with the other 27 members.

The prospect of a no-deal Brexit, although still unlikely, is looking increasingly possible as a result of the seemingly intractable parliamentary deadlock over the UK’s planned exit from the EU next March.

Disabled people, including those who use personal assistants (PAs), have warned repeatedly of the risk that any form of Brexit could mean their access to PAs from EU countries could dry up, with a no-deal Brexit making this even more likely.

The disabled crossbench peer Baroness [Jane] Campbell told peers last year that John Evans, one of the founders of the UK independent living movement, had employed PAs from 15 EU countries in the past 34 years.

He had told her that if the government failed to protect access to the EU’s huge pool of people keen to work as PAs in the UK, he would lose his ability to live independently and could be forced to return to residential care, 34 years after he was liberated from a Cheshire Home.

But Hancock’s evidence this week to the Commons health and social care committee (pictured), and subsequent statements by his press office, appear to show that he has no plans in place for dealing with a social care recruitment crisis if the UK crashes out of the EU without a deal next spring.

Labour’s Diana Johnson had asked Hancock: “If we have a no deal scenario, what is your policy for recruitment to social care in the future?

“How are you going to deal with that?”

Hancock, who also confirmed later that he still plans to publish the government’s long-awaited adult social care green paper by the end of the year, told the committee in response that there was a higher proportion of people working in social care in the UK who were from outside the EU than from EU countries.

But his only answer to how he would cope with the impact of a no-deal Brexit on social care recruitment appeared to be to “train people locally and give people from the UK opportunities to work in social care” and to make sure “it is yet more of a rewarding career”.

He said: “I think these things are all part of trying to make sure that social care can give the dignity that it ought to.

“It’s something that we care a lot about getting right.”

A Department of Health and Social Care (DHSC) spokeswoman said afterwards: “We are confident of reaching a deal with the EU which benefits our health and care workforce.

“We want to promote adult social care as a career of choice and are launching a national recruitment campaign in the new year to raise the image and profile of the sector.

“Our upcoming green paper will also look at how we can recruit and retain a valued workforce.”

DHSC was due to launch a pilot scheme today (Thursday) to provide the 104,000 EU nationals working in social care in the UK with an opportunity to apply early to the government’s EU settlement scheme.

But the DHSC spokeswoman also said that that recruitment campaign and the green paper were “going ahead regardless of whether or not we get a deal and both aim to help with recruitment and retention”.

She refused to confirm that there were no extra plans in place for social care recruitment in the event of a no-deal Brexit, although DHSC has now been given several opportunities to explain what they might be if they did exist.

Hancock had told the committee that it was easier now to recruit people into social care because of the introduction of the government’s “national living wage”, which had led to workers in the sector receiving “some of the fastest pay rises” across the economy as so many of them were previously only being paid the minimum wage.

Hancock had said that it was “important to plan for all eventualities” and so his department was planning for the possibility of a no-deal Brexit’s impact on the NHS although it did not think that was likely to happen.

He said: “A no-deal scenario for the NHS will be difficult but we are confident that if everybody does everything that they need to do then we will have an unhindered supply of medicines.

“We can make sure that we get the talent that we need from around the world and we can have a medicine and medical devices regulation system that can provide for access to the best new medicines.”

He added: “As a contingency we prepare for all eventualities, including no-deal, and no-deal clearly is the one that makes life… for which we have to do the most preparation.”

The committee had earlier heard from Mark Dayan, a policy and public affairs analyst at Nuffield Trust, that a no-deal Brexit would likely cause “quite a big problem for social care” because of the sector’s current reliance on EU workers, and because it has to compete for workers with other low-paid sectors in the UK economy.

He said the government would have “total freedom” with its immigration policy in such a situation and so could keep allowing people who want to work in social care into the country but he said that “all the indications we have are that that will not be the case and that there will be strong impediments to workers with lower salaries and lower qualifications”.

He told Johnson: “The social care sector is in an extremely weak position to start raising wages to try and bring in a bigger share of a pool that is not growing as quickly, so I think you are absolutely right to flag that up as a concern.

“For me it’s a bigger one actually than the [impact of a no-deal Brexit on the] NHS workforce.”