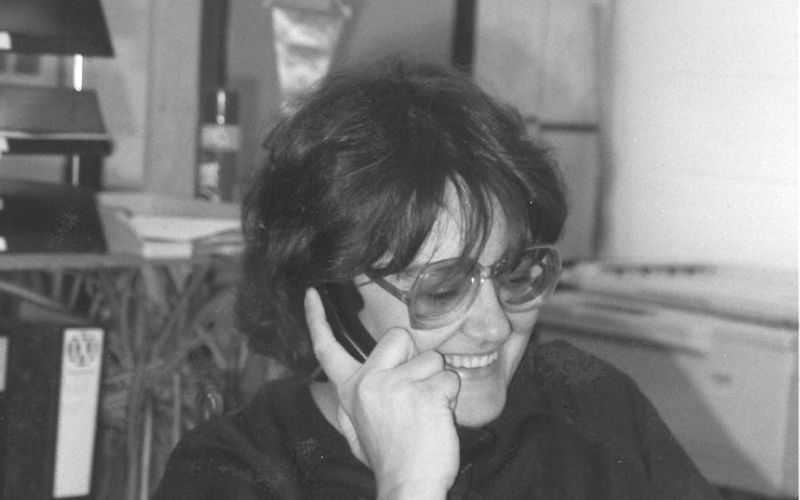 Fellow activists, family and friends are mourning the death of Lorraine Gradwell, who had an “immeasurable” impact on the rights and lives of other disabled people over more than 30 years of campaigning.

Disabled activists paid tribute this week to her tenacity, vision, kindness, and passionate commitment to disability rights and the social model of disability.

Her husband, Tony Baldwinson, said that she died peacefully on 3 September, surrounded by her family. She also leaves two children, Jenny and John*.

In the early 1980s, Gradwell joined the Manchester group of the Union of the Physically Impaired Against Segregation (UPIAS), and she was later a founding member (and chair) of Greater Manchester Coalition of Disabled People (GMCDP), and also its first development worker, and a council member of the British Council of Disabled People (BCODP).

She went on to found the disabled people’s organisation (DPO) Breakthrough UK, which supports disabled people to live and work independently, and which she served as chief executive for nearly 15 years, between 1998 and 2013, developing it into an organisation with an annual income of more than £1 million and 40 staff, 70 per cent of whom were disabled people.

She was also a member of the Small Business Council for four years, and was one of the many leading disabled activists who have achieved an MA in disability studies after studying at the University of Leeds.

And for more than 20 years, she was also a successful consultant and trainer on disability, diversity, and other issues.

Born in 1953, Gradwell had been a keen swimmer, and maintained close involvement over more than 30 years with Manchester Disabled Athletes, until its closure.

She also competed as a wheelchair athlete and swimmer in the 1974 Commonwealth Paraplegic Games in New Zealand.

In a statement, GMCDP said she was “a major figure, not only within GMCDP, but the disabled people’s movement as a whole.

“Lorraine’s ability to articulate, challenge and persuade made her a formidable advocate of disability rights.

“She will be sorely missed; not only as a comrade and leader but also a friend, supporter and confidante to a lot of people.”

Breakthrough UK said she was “a great woman whose impact on the rights and lives of disabled people locally and nationally is immeasurable.

“Respected by all, Lorraine had an instinctive ability to translate the personal into the political, bringing meaning to disabled people and gently leading, chiding and changing the many people fortunate to cross her path.”

Her Twitter feed in the months before her death showed her continuing support for the social model, DPOs, the NHS, the Labour party, and her concern about the impact of government cuts on disabled people, the UK government’s failure to implement the UN disability convention, the legalisation of assisted suicide, and the creeping privatisation of the NHS.

She and her husband had set up a webpage containing much of her writing and details of her early life.

In one of those articles, from 2007, she wrote of how disabled people had “adopted the social model and clung fast to it, like a life raft in a stormy sea”.

“In the face of all the charitable, medical and welfare based power structures, not to mention the political ones we have needed to challenge, we needed a rock to cling to; the social model has been that rock,” she wrote.

“As a general and universal tool it’s a bit like a Swiss army knife – it’s infinitely adaptable and multipurpose and easy to carry around: why on earth would we weaken ourselves by no longer using it?”

Three years earlier, in 2004, she was one of the first activists to highlight concerns about the use of the now widely-criticised biopsychosocial model of disability by the Department for Work and Pensions, and wrote of how she was “horrified” by its adoption, which “seems to have quietly slipped onto the agenda without a serious challenge from the research community”.

Only last year, following the resignation of Iain Duncan Smith as work and pensions secretary, she wrote of the increasing use of the word “vulnerable” to describe disabled people, and the trend for “inappropriate compassion”.

“Disabled people are not magically endowed with ‘vulnerability’,” she wrote. “Lack of access to decent education, poor and unsuitable housing, exclusion from employment, inaccessible environments, pitiful levels of social support – these and more are what render us vulnerable, not our impairments.”

She went on to express her concern that “people automatically assume that, as disabled people, we need care (ie we need looking after).

“Nobody, but nobody, does absolutely everything for themselves, it’s all a spectrum with varying degrees of interdependence.

“A proper system of support that recognises all needs would transform the concept of care. So no, I don’t want you to care.”

Baroness [Jane] Campbell, who met Gradwell for the first time after hearing her speak at the first disability movement conference she attended, would later say in the introduction to a collection of her writing: “She taught us all how to democratise our campaigning organisations, so that all disabled people would feel involved and would be given the ingredients to throw off the shackles of dependency.

“The slogan ‘nothing about us without us’ was never as well established as it was in Manchester where Lorraine’s insight and campaign methodology was embraced wholeheartedly.”

Baroness Campbell said this week that Gradwell was very important to her, “not just as a friend who had been highly active in the same civil rights struggle but as a female role model who revealed to me the secrets of operating within a dominantly male political environment.

“Her steely strength, combined with kindness and understanding towards those in struggle was truly remarkable.

“I deeply admired her unwavering commitment to the emancipation of disabled people.

“She gave us all such strength and clarity about how we must go forward, which at times was very challenging.

“Like most civil rights movements we didn’t always agree and I remember many heated discussions around the BCOPD council table as we thrashed out policy and strategy (Gradwell was a member of the council when Baroness Campbell was BCODP’s chair).

“Indeed, her strength of force could be quite scary at times!

“Nonetheless, she was one of the few women who made our civil rights movement so effective in the late 80s and 90s, especially in Manchester, which became a bastion of the disability rights movement and remains the strongest inclusive community in the UK.

“The movement has lost a great warrior and so many of us have lost a very important friend. In my eyes she is our Angel of the North!”

Another friend, Martin Pagel, the disabled former deputy leader of Manchester City Council, said in a tribute to Gradwell that she was “undoubtedly a people person”.

He said: “She could spot potential, but even more impressive, she had the skills to mentor, train, coax and cajole to ensure that people developed and achieved.

“Skills which were used not only at work but in her part-time role as matchmaker.

“Conversely, she wouldn’t suffer fools and made sure they knew it; usually politely and diplomatically – but not always so.

“Lorraine had an immense range of skills which were central to the development of disabled people’s organisations in Manchester, across the country and internationally.

“In addition to being an activist, campaigner, educator, writer, poet and pioneering advocate for the social model of disability and independent living, Lorraine was also an organiser.”

He said she was adept at “organising ideas into action”, and that she “developed the transition from sheltered workshops to mainstream employment and training as the inaugural chief executive of Breakthrough UK”.

She was, he said, “an amazing disabled woman; an inspirational leader, mentor and a warrior in the fight for a just and equal society”.

Another friend, the disabled Liverpool city councillor Pam Thomas, said she remembered fighting for rights together in the 1990s and working with Gradwell at national level in the trade union Unison.

She said: “Lorraine was also a pragmatist working with national and local politicians and civil servants to bring about change.

“Lorraine had a good sense of what would work and what would not, she could sum up situations very neatly.”

She saw her friend for the last time two weeks ago. “We talked about our childhood recollections of contracting polio as young children and being in hospital where our families were allowed hardly any contact.

“We also talked about how, along with other disabled people, in the 1990s we fought for equality and rights and how it had mostly been swept away by government of the past seven years and set us back decades.”

Sue Bott, deputy chief executive of Disability Rights UK (DR UK), said in a blog this week that Gradwell was “forthright and principled”.

She first met her in 1991 after starting a new job in Shropshire as a development worker for a disabled people’s organisation and visiting Manchester “to see what I could learn from this disability activist who had a reputation for knowing her own mind”, but “of course she could not have been nicer or warmer”.

She said Gradwell “was a force to be reckoned with” at BCODP and “sometimes gave other people a hard time but only because she believed passionately in furthering disability rights”.

As one of the first trustees of the newly-formed DRUK in 2012, Bott said Gradwell had “approached her responsibilities in the usual forthright manner” and was “a necessary voice in a new organisation deciding on its direction”.

She also remembers asking the Office for Disability Issues to invite Gradwell onto the project group rolling out the last Labour government’s Right to Control pilot scheme, which brought disabled people’s various elements of support into one personal budget.

“She came and her pearls of wisdom and experience stole the show,” said Bott. “So much so in fact I almost wished she had not been invited, as she was far more articulate and wise than I was!”

*Her family have asked for no flowers, but donations to be made to GMCDP. Details of funeral arrangements will be posted on the websites of GMCDP and Breakthrough UK. To add to a book of remembrance being compiled by Breakthrough UK, email: [email protected]

**Her family are coordinating tributes, photographs and memories through the following web page: http://lorrainegradwell.weebly.com