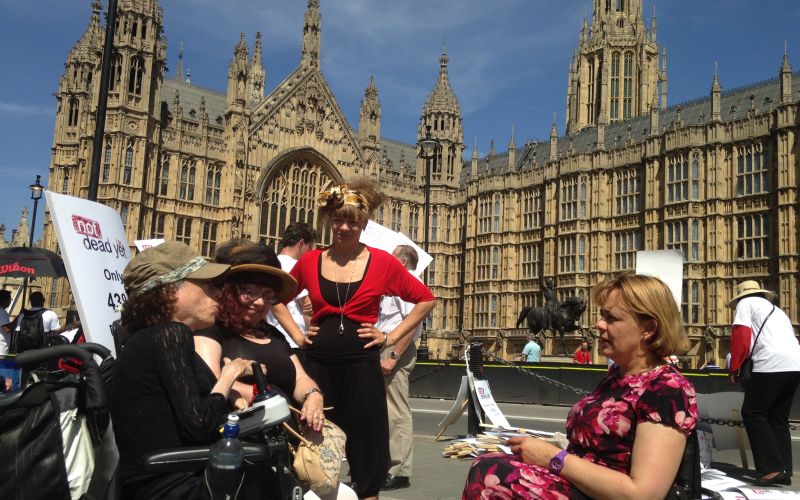 MPs have been warned by a prominent activist that legalising assisted suicide would mean that some disabled people would die as a result of “exploitation and abuse”.

The user-led organisation Not Dead Yet UK held a lobby of MPs this week in a bid to persuade them to vote against the latest attempt to persuade parliament to legalise assisted suicide.

About 25 MPs attended the packed event, which was addressed by two leading disabled opponents of legalisation, the crossbench peer Baroness [Tanni] Grey-Thompson, and the actor and performer Liz Carr.

A private member’s bill put forward by the Labour MP Rob Marris will reach its first key stage on 11 September, when it is debated and voted on in the Commons.

The legalisation of assisted suicide is fiercely opposed by much of the disabled people’s movement, who see the battle to prevent such a law as a key disability rights issue.

Carr told MPs that the main weapons of the organisation pushing the bill, Dignity in Dying (formerly known as the Voluntary Euthanasia Society), were “misinformation, emotion and fear – fear about pain, dependence and disability”.

She said she was campaigning on behalf of disabled people who were unable to speak in their own defence and “don’t have access to the drugs, housing, social care, support and choice they would like”.

She told MPs: “If this bill becomes law, some disabled and vulnerable people will be subjected to exploitation and abuse and will die as a result.

“The very reason we don’t allow capital punishment in this society is because the best police investigation and the best judges can come to the wrong conclusion and execute an innocent person.

“This bill if passed will also mean that innocent people get killed. The current law protects people against this kind of abuse. It does not need changing.”

Carr was later joined by other NDY UK members as she delivered a letter to Downing Street outlining arguments against the proposed law, thanking the prime minister for his own opposition to legalisation, but expressing “deep concern” about his intention to allow Conservative MPs a free vote on the issue.

Carr (pictured, talking to Baroness Grey-Thompson at an NDY UK protest last year) told Disability News Service after the lobby that opposition from disabled people to assisted suicide was often side-lined by the media and in parliament, and the event had been an opportunity to put those views across to politicians.

She said it was vital to explain to MPs that opposition to the bill was coming from disabled people with decades of experience of disability activism, and understanding of key disability rights concepts such as the social model of disability.

Carr contrasted that with those backing the bill, who often relied on opinion polls and non-disabled celebrity backers.

Meanwhile, the European Court of Human Rights has dismissed appeals by two British people seeking changes in the law that would allow disabled people help to end their lives.

The court declared the applications by both Tony Lamb and Jane Nicklinson to be inadmissable.

Lamb is almost completely paralysed after a car crash and wants legal permission for a volunteer to give him drugs to end his life, while Nicklinson was seeking a change in the law on behalf of her husband Tony, who died in 2012, and had locked-in syndrome.

Nicklinson had argued that the domestic courts had failed to determine the compatibility of the law in the UK on assisted suicide with her and her husband’s right to respect for private and family life, but the European court declared this application to be “manifestly ill-founded”, and also found that her complaint had already been examined by the UK Supreme Court.

Lamb’s case was declared inadmissible for “non-exhaustion of domestic remedies”, as some of his complaint had not been heard by the Supreme Court.