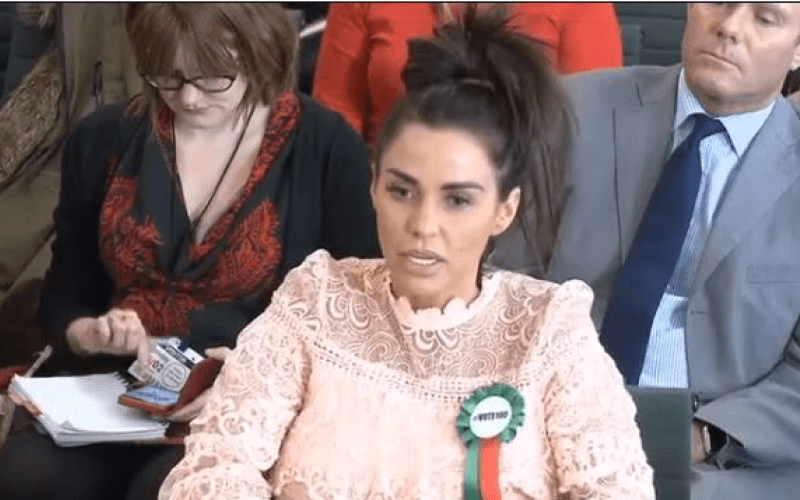 MPs have raised serious concerns about links between football fans and the targeted online abuse of disabled people.

The House of Commons petitions committee said in a report this week that it had become “increasingly concerned” about such links during its inquiry into the “extreme level of abuse” faced by disabled people who use the internet.

The committee found widespread use of “ableist slurs” and terms connected to disability being used as insults by football supporters.

It even found some fans using the name of Harvey Price, the disabled son of former model Katie Price, as a way of insulting a footballer’s ability.

The inquiry was launched in response to a petition set up by Price (pictured giving evidence to the committee), which was signed by more than 220,000 people and followed years of disablist and racist abuse targeted at Harvey, himself a football fan and the son of former Manchester United striker Dwight Yorke.

The committee contacted five organisations about its concerns: the Premier League, the English Football League, the Football Association, the Professional Footballers’ Association (PFA), and Kick It Out, which campaigns for equality in football.

Only one of the five, the PFA, responded to the committee’s concerns, but the other four have now apologised for an administrative error that led to them failing to send the committee their joint response.

That formal response has now been sent to the committee, along with an apology.

A Kick It Out spokesperson said: “Kick It Out drafted a response in the days following the letter from the petitions committee.

“However, following discussions with our funders it was decided a joint response from Kick It Out and all the governing bodies would be issued.

“Unfortunately, this did not materialise before the committee’s deadline and we apologise unreservedly for the oversight on our part which led to this.

“This period coincided with a serious illness to our chief executive, which caused major disruption in our work.

“Since 2012, Kick It Out has been raising awareness about online discrimination, including abuse towards disabled people, and continues to support victims of such abuse.

“This has been achieved through our work as a reporting bureau, as well as expert working groups, online research and campaigns such as ‘Klick It Out’.

“Kick It Out is not a sanctioning body. Therefore, we are not able to unilaterally ‘act’ to end a problem ourselves.

“However, the organisation continues to work closely with various regional police forces, the British Transport Police, the UK Football Policing Unit, the football authorities and social media platforms to report any discrimination and achieve justice for victims of such abuse.

“Politicians must also step up their own efforts to tackle the problem which is prevalent across society, not just football.”

The Premier League said that the organisation and its member clubs “do a huge amount of work to encourage inclusion and equality throughout football, and to challenge discrimination in the game”.

It has worked with Kick It Out to fund and develop an app that “enables discreet reporting of any discrimination in the sport, whether in a stadium, on social media, at grassroots level or elsewhere”.

A Premier League spokesperson said: “Our own social media accounts are monitored for offensive and discriminatory language, which is removed whenever possible.

“We recently co-hosted a round table event with Stonewall to consider football’s approach to online hate speech, and we have held collective discussions within football about the Football Offences Act and whether its terms could be extended to include all protected characteristics.”