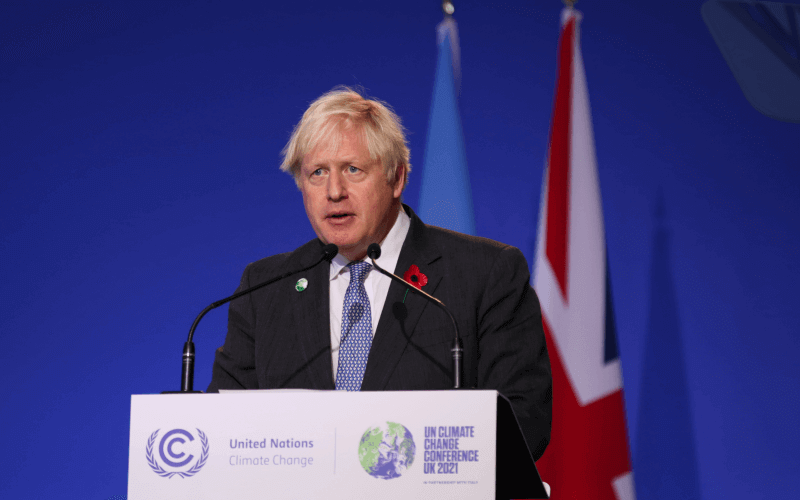 Disabled campaigners have raised serious concerns about the UK government’s multiple failures to ensure the accessibility of the COP26 climate change conference in Glasgow.

The first concerns came after high-profile complaints made by the Israeli energy minister, Karine Elharrar, a wheelchair-user, who was unable to access the conference venue at all on Monday and had to return to her hotel.

She told journalists that the vehicle she had arrived in was not allowed inside the compound, despite her delegation apparently informing organisers of her access needs in advance of the conference.

The shuttle bus she was offered instead was not wheelchair-accessible, she said.

A government apology for the “confusion” was made directly to Elharrar by prime minister Boris Johnson (pictured, speaking at the conference) the following day.

But Disability News Service (DNS) has learned of a series of other access concerns that have since been raised, including an apparent failure to provide British Sign Language (BSL) interpreters and captions for COP26 broadcasts.

It has also heard from Jason Boberg, of the SustainedAbility Disability and Climate Network, who said he had been unable to enter the conference on Tuesday morning because the accessibility entrance had been closed.

He said this was “extremely unfortunate” and had caused injuries to some of his colleagues.

Boberg was forced to wait until the afternoon when the line reopened so he could enter the venue “which meant for the morning of the first day I was unable to access COP”, although he said it had been working well since then.

He said this showed the need for the UK government to “really understand the need for full participation” of disabled people, as described in the UN’s Convention on the Rights of Persons with Disabilities.

He said SustainedAbility had been in discussions with the COP26 team since the beginning of the year and had repeatedly made clear its concerns about accessibility issues with the venue.

Boberg said they had “made the point that a disabled person that has experience within the COPs over multiple years needs to be on the ground here assessing the accessibility requirements, as accessibility Is extremely difficult to get right at the COP”.

He said: “We are hoping these unfortunate circumstances shed light on the need for disability representation and accessibility.

“How are we supposed to get our rights included if we can’t get into the venue?”

He said SustainedAbility had been working for the last four COP conferences to include the needs and rights of disabled people into the approved conference text during negotiations.

“It’s a physical illustration of why it is so important to have disability rights in the text to make sure civil society and disabled people can fully participate in the negotiations.

“We know that disabled people are left behind in climate disasters, floods and fires, and now we are left out of the conference that is supposedly meant to address that.

“This is an international disaster for disability rights.”

Inclusion Scotland, which will be taking part in an official COP26 event tomorrow, said it was “appalled” at what had happened to Karine Elharrar.

And it said it had seen no evidence of BSL interpretation or captions at the conference.

It said the venue was a “large, well-used events campus” with buildings that were “generally accessible for wheelchair-users”, and entrances which are wheelchair-accessible.

But it said that the way the event had been set up meant that Elharrar could not access the conference.

Heather Fisken, Inclusion Scotland’s head of policy and research, told DNS: “This episode sends out shocking message which says that disabled people are not expected to be at decision-making tables.

“That’s nonsense. Even the United Nations Convention on the Rights of Persons with Disabilities (PDF) recognises our right to participate in public life and decisions about us should not be taken without us.

“It is never enough to say that a building is accessible; you have to prepare for and manage the event, and make sure even temporary staff know what to do to ensure access.”

She said this had left her feeling frustrated and panicked at not being able to understand what world leaders were saying about the climate crisis.

She told DNS that Deaf people had yet again been treated unfairly, adding: “It’s another day feeling empty, forgotten, feeling we are not worthy of knowing this vital information.”

The mounting concerns come just three months after the UK government published its much-criticised National Disability Strategy, which Johnson said at the time was about “our ability to acknowledge and appreciate the contribution that disabled people make to our national life, and to listen and respond to their needs”.

Dzaier Neil, national convenor of the Green Party’s disability group, and co-equality and diversity officer on its national executive, said there was a “huge” level of concern about the access failings at COP26, particularly as disabled people in many parts of the world were experiencing the worst impacts of the climate disaster.

She said: “Disabled people in terms of climate change are the hardest hit.”

But despite this, she said, disability was “low in the pecking order” of the UK government.

She said the access failures were “highlighting again how this government is absolutely going out to silence disabled people”.

She pointed to the admission by the prime minister’s office in April that it had made no attempt to ensure that a new £2.6 million Downing Street media briefing room would be accessible to disabled people.

Neil said: “The government have made it very, very clear that they want to ensure that disabled people do not have a voice.”

Kamran Mallick, chief executive of Disability Rights UK, said: “A lack of accessibility has nothing to do with ‘confusion’ and everything to do with a lack of the social model of disability being at the heart of government strategy to assure that not only can the 20 per cent of the UK population be able to access everything they need to, but that international ambassadors are also afforded this most basic of human rights.”

The UN Climate Change press office did not respond to a request to comment on the access concerns, including about the apparent lack of subtitles and BSL interpreters on its webcasts.

A spokesperson for the UK government’s COP26 team said on Tuesday: “This was a genuine mistake and we have apologised to Minister Elharrar – we look forward to her attendance at COP26 today.

“We remain committed to an inclusive event accessible to all and the venue was designed to facilitate that.”

The government also said there were two fully accessible shuttle routes, and that COP26 has an accessibility support desk.

But the government spokesperson had failed by noon today (Thursday) to explain why Karine Elharrar was unable to use the shuttle service if it was “fully wheelchair accessible”, to explain what “gold level” accessibility is, to comment on the apparent lack of BSL interpreters and subtitles at the conference, or to comment on the further concerns about the accessible entrance.