You are here: Home / Employment / Nearly one in three staff laid off by HMRC are disabled, says union 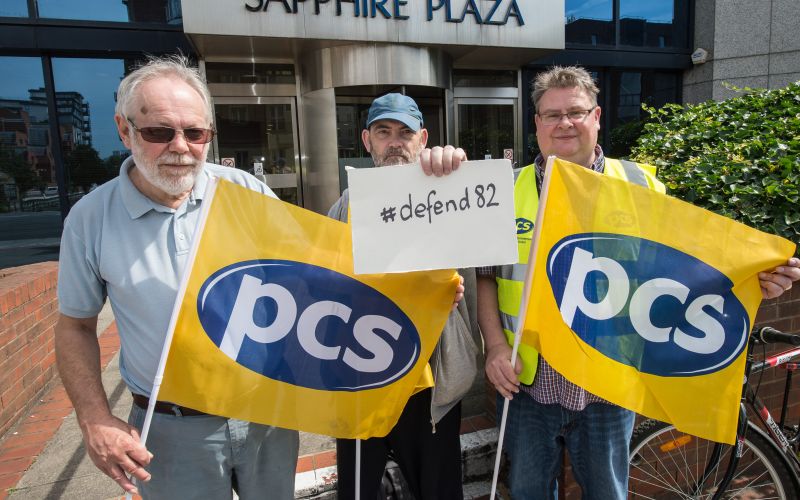 Nearly a third of employees who have lost their jobs in an HM Revenue and Customs (HMRC) compulsory redundancy programme are disabled people, union officials have revealed.

Members of the Public and Commercial Services Union (PCS) demonstrated against the redundancies outside HMRC’s Reading offices this week.

They are angry that out of 79 compulsory redundancies across the UK, as many as 24 staff members who left their jobs this week are disabled people.

They say the decision to make so many disabled staff members redundant makes a mockery of government claims that it wants to halve the disability employment gap.

In Reading, of three administrative assistants who lost their jobs, two are disabled people.

Many of those affected by the redundancy programme are staff at the lowest pay level, which is disproportionately occupied by disabled and black and minority ethnic staff, said the union.

David Wilmott, a disabled administrative assistant who has been made redundant, and himself a PCS member, said he was the only disabled person in his office of between 30 and 40 employees, but he was one of just two who lost their jobs, because the redundancies were aimed at those on low pay grades.

Wilmott, from Peterborough, who had been working for HMRC for 13 years, said he felt he had been “singled out” for redundancy.

He said HMRC had failed to abide by the redundancy guidelines it should have followed, by offering him other job opportunities that were not accessible to him.

He also said HMRC had not offered him a promotion, even though he had been in the pool of administrative assistants who could potentially secure promotion for about three years.

Wilmott said HMRC’s behaviour demonstrated the government’s hypocrisy over its claims that it wants to halve the disability employment gap.

He said: “They say one thing and do another. It makes one speechless, considering what they have done.”

His mother, Christine, said: “This has dragged on for over three years. I can see the stress it has caused him. It has been awful.”

Despite the union’s figures, HMRC equality impact assessments of the redundancies affecting both Wilmott – who worked in debt management – and the Reading office concluded: “We are not aware of any potential adverse impacts that would disproportionately affect staff in this exit programme due to their disability.”

Mark Leopard (pictured, centre, at the protest), who is responsible for equality issues for PCS in Reading, said the move to make so many disabled employees redundant was clearly discriminatory.

He said: “You hear what the government are saying about getting disabled people back into work, while on the other hand they’re pushing people out of work and not really making the effort to keep people in work.”

Leopard said he believed that some of those who have lost their jobs will take legal action against HMRC.

He said: “I think there is a clear case there of discrimination, a failure to take disability into account.

“We are not going to change their minds at this late stage but they need to be embarrassed about what they’ve done.”

He said that one reason that so many disabled people were losing their jobs was because the redundancies were concentrated among the lowest pay grades.

He said HMRC’s attitude to disability had also been demonstrated by its reluctance to provide reasonable adjustments for disabled people on these pay grades.

He said: “If you’re a senior civil servant, they give you a laptop and a Blackberry and you can work flexibly.

The PCS protest was supported online by Disabled People Against Cuts (DPAC).

Bob Ellard, a member of DPAC’s national steering group, said: “This government professes to want to halve the disability employment gap, so they harass disabled people off employment and support allowance, usually onto the dole, where they are subject to sanctions.

“Then they do everything possible to prevent us gaining work: they cut Access to Work funding, take away funding support with personal independence payment, take away adapted mobility cars and more.

“When disabled people do have jobs, in spite of the government’s best efforts, they turn a blind eye to workplace discrimination and in a final staggering move they sack their own disabled employees.

“There is only one conclusion that’s possible: that this government simply have it in for us.”

An HMRC spokesman said: “We do not recognise the estimates being quoted regarding disabled staff members.

“We have made every effort to explore redeployment options, but unfortunately for this group this has resulted in them leaving the department on compulsory redundancy terms.

“This is no reflection on the contribution and commitment of the people affected.”

He said that 79 people across the UK would be leaving HMRC through compulsory redundancy, and that HMRC had “started meaningful consultation” with the unions in August 2015.

He said: “This is because either their role has come to an end, or their office has closed and they could not be redeployed locally.

“All of these people turned down an offer of a voluntary redundancy package, and HMRC explained at that time that they were at risk of compulsory redundancy.”

Asked if its actions had been discriminatory, he said HMRC had followed the relevant Cabinet Office protocols and had carried out a five-month consultation process with unions.

He said: “The Cabinet Office only gave HMRC permission to move to compulsory redundancy when it was satisfied that HMRC had explored all reasonable avenues for redeployment for all the people concerned.”

Asked whether there had been a reluctance to offer reasonable adjustments to disabled staff on lower pay grades, he said: “HMRC provide a range of resources and help, available to all our staff who feel they need extra resource.”

He also confirmed that equality impact assessments had identified “no potential adverse impacts that would disproportionately affect staff in this exit programme due to their disability”.

He added: “Managers have held regular meetings with staff to discuss their individual circumstances, and put any mitigation in place.

“HMRC continued to look for redeployment opportunities for all these staff until their last day of service.”