You are here: Home / Politics / New minister for disabled people on the social model, cost-of-living and jobs 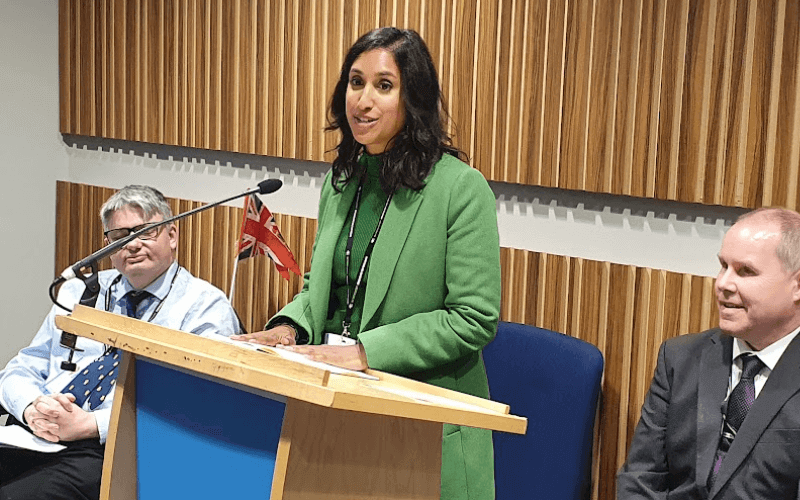 For someone who still claims to be “backing Boris” on her own website, it may not be surprising that the new minister for disabled people, Claire Coutinho, is not yet up to speed on important aspects of her new post.

Coutinho’s role has still not been confirmed by the Department for Work and Pensions (DWP), with its website still describing her as a junior minister this morning (Thursday), but giving no clue as to her portfolio.

But Coutinho (pictured) made two appearances as the minister for disabled people at the Conservative party conference in Birmingham this week.

In her second appearance, at a Scope fringe event that focused on its campaign for more accessible playgrounds, Coutinho admitted to Disability News Service (DNS) that she was “not aware” of the social model of disability, and so was unable to say how it would impact her work as the minister for disabled people.

DWP’s failure to brief her on the social model meant she repeatedly referred to “people with disabilities” rather than “disabled people” throughout her speeches.

She declined an interview with DNS, explaining that it was too soon to be questioned about her new role, although a DWP spokesperson separately said that she “does not have time for an interview while she is at conference this week”.

Most of her two speeches, at the Scope fringe event, and an earlier meeting organised by the Conservative Disability Group (CDG), were uncontroversial.

She said the disability portfolio was “one of the ones I would have picked” if she had had a choice, and she highlighted the importance of increasing the number of disabled people in work, mirroring comments made to the conference by work and pensions secretary Chloe Smith, her predecessor in the post.

Coutinho told the CDG fringe event: “We can see the number of people, who I know I am very worried about, who become economically inactive because of health conditions.”

Although it was not entirely clear what employment-related policy she was referring to, she also told the meeting: “We will have to [have] very close joint working between our department, the DWP, and the health department to make sure that we are not holding people back because of treatment that they need.”

She mentioned the “huge challenge” of the cost-of-living crisis, including for disabled people with their “higher costs”, and she detailed the government’s package of financial support, including the £150 payment for those on disability benefits.

In the CDG event, she said that accessibility was something she was “passionate” about, and she linked this with her belief in the importance of “community” and “having that sense of neighbourhood”, a theme she repeated in the Scope event when she also spoke – briefly – of the importance of accessible transport.

She also made it clear that she was aware of the problems within the disability benefits system, and how important it was that “people have a good experience”.

She said: “The first time that people interact with a system they should try and get a right decision as soon as possible.”

She also referenced the delays in the “brilliant” Access to Work scheme and said: “I know people have had long waits, but I think the potential for that scheme is enormous.”

She talked briefly about her career and her family, telling the Scope meeting: “Everyone in my family works for the NHS, we have a lot of GPs.

“I am the black sheep of the family. I am a Conservative politician and everyone else works for the NHS.”

Coutinho has worked as a special adviser to the Treasury and 10 Downing Street, and she was appointed as a parliamentary private secretary to the Treasury in March 2020 following her election as an MP in December 2019.

She is also one of two new DWP ministers – Alex Burghart, the new pensions minister, is a former director of policy – with connections to the Centre for Social Justice (CSJ), the centre-right thinktank co-founded by former work and pensions secretary Sir Iain Duncan Smith.

She spent two years writing a report on access to financial services for low-income families, which was published by CSJ in 2015.

Although it does discuss the impact of debt on mental health, the barriers faced by vulnerable customers, and how those with mental distress often find it difficult to access financial services, there is no mention across the 113-page report of disabled people generally and their problems accessing financial services.

Coutinho began her career at investment banking giant Merrill Lynch in July 2008, just after it reported huge losses as part of the US sub-prime lending crisis that caused the worldwide recession.

She worked at Merrill Lynch for nearly four years, through the worst of the global recession.