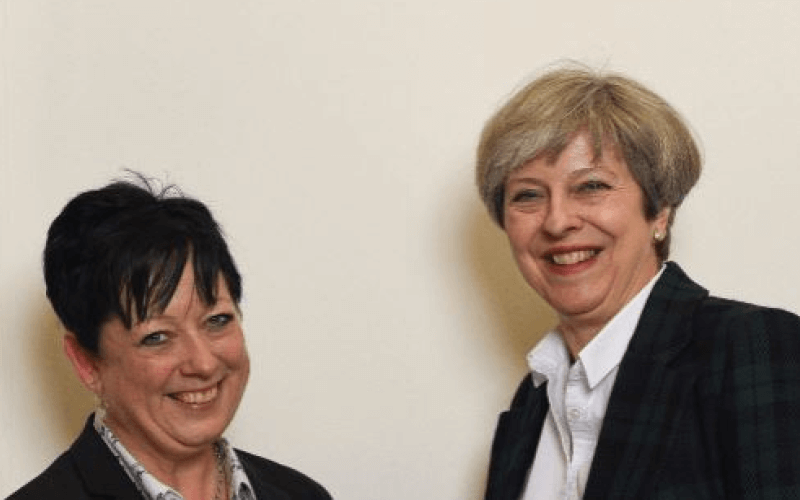 The new “minister for suicide prevention” has refused to say if she will alert agencies across the country to NHS figures that show the high risk of suicide faced by claimants of out-of-work disability benefits.

Last week, mental health minister Jackie Doyle-Price had “minister for suicide prevention” added to her job title, with prime minister Theresa May (pictured, right, with Doyle-Price) claiming she wanted to “prevent the tragedy of suicide taking too many lives”.

Part of Doyle-Price’s new role will be to “ensure every local area has an effective suicide prevention plan in place, and look at how the latest technology can be used to identify those most at risk”.

But Doyle-Price and her Department of Health and Social Care (DHSC) have refused to say if she will take the simple step of highlighting claimants of employment and support allowance (ESA) as a high-risk group in the government’s suicide prevention strategy for England.

Disability News Service (DNS) revealed last December how NHS Digital’s Adult Psychiatric Morbidity Survey showed more than 43 per cent of ESA claimants had said (when asked in 2014) that they had attempted suicide at some point in their lives.

This compared with less than seven per cent of adults who were not claiming ESA and said they had attempted to take their own lives at some point.

But the government’s suicide prevention strategy fails to mention these figures or to highlight ESA claimants as a high-risk group, even though it briefly mentions Department for Work and Pensions (DWP) guidance for dealing with claimants of ESA and other benefits who may be at risk of suicide or self-harm, and the department’s processes for learning from DWP-linked suicides.

In the document, health secretary Jeremy Hunt – now foreign secretary – said he wanted to strengthen the national strategy through “better targeting of suicide prevention and help seeking in high risk groups” and by “improving data at national and local level and how this data is used to help take action and target efforts more accurately”.

But the Department of Health (now DHSC) refused to say last December why it had failed to warn NHS bodies and other local services that ESA claimants were at a hugely-increased suicide risk.

And DNS found no evidence earlier this year that DH had attempted to highlight the information with local areas and agencies or to advise them to include ESA claimants as a high-risk group in their own suicide prevention plans.

This week, DHSC has been unable to say if Doyle-Price will finally alert agencies across the country to the high-risk status of ESA claimants.

DNS asked the DHSC press office last Friday if Doyle-Price would promise to publish an updated version of the suicide prevention strategy that mentions the figures and highlights the fact that ESA claimants are at a high risk of suicide, and if she would alert local agencies to the figures and advise them to include ESA claimants as a high-risk group in their own local suicide prevention plans.

But a string of DHSC press officers have failed to provide a response, with one revealing that the delay was because she was “waiting to hear back from the DWP press office”.