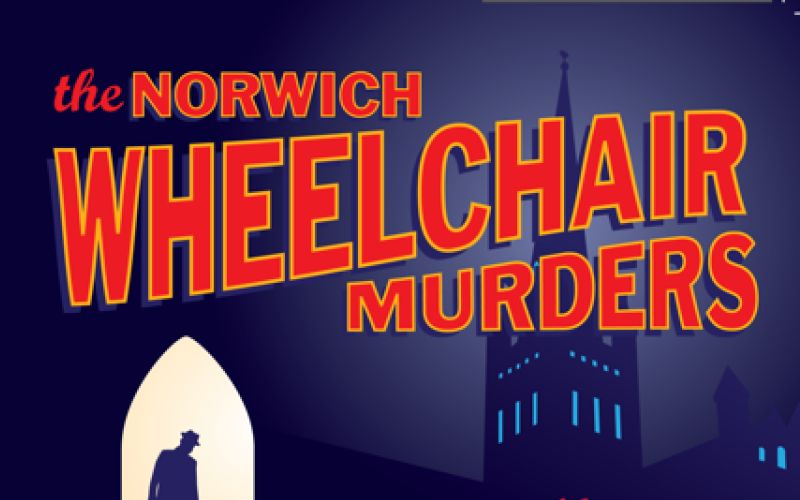 A disabled writer-activist is hoping that his new novel will alert its readers to the “scary” undercurrent of disablism that has been repeatedly stirred up by the government’s “benefit scrounger” rhetoric.

The Norwich Wheelchair Murders is Bill Albert’s eighth novel, and its combination of hard-bitten cynicism, sharp dialogue, ruthless gangsters and fast-moving plot has led to it being dubbed the first of a new genre: Crip Noir.

Fishbaum has to flee his penthouse in Santa Monica to escape some vengeful Russian gangsters, and ends up hiding out with his five-year-old daughter in a council flat in Norwich, while also coming to terms with a diagnosis that has left him using a wheelchair.

It is a similar journey to the one Albert took himself. Born in New York, the former university academic grew up and studied in California, but has lived in England since 1964, and in Norwich for more than 45 years.

He did not discover that he was a disabled person until he finally received a medical diagnosis at the age of 31, but his journey to feeling comfortable with that identity was a gradual one that took at least another 10 years.

That journey was aided by meeting other “crips” at a Norwich access group, people whose demonstration of “lives well lived” taught him, he said, about himself and “how to be”.

Before he met them, like his character Bobby Fishbaum, he says in a short memoir, he “didn’t know any disabled people. I didn’t want to either. They frightened me, repelled me with their crippled twitching, garbled speech, their unnatural ways.”

Taking part in the last of the anti-Telethon demos outside the studios of London Weekend Television in 1992 – where his teachers were “five hundred joyfully angry crips, rolling and staggering and stumbling and drooling and twitching and shouting and singing and waving banners” – was a swift introduction to the disabled people’s movement, the social model and direct action.

Soon he was importing some of that back to Norwich, and helping to set up Norfolk Coalition of Disabled People – these days known as Equal Lives – for which he was the founding chair.

One of the disabled “role models” who taught him “how to be” was an activist called Brendan Carroll, on whom he loosely based the character of Brendan in his novel.

The novel’s dedication says it was Carroll, who died several years ago, and six other disabled friends who taught him “the joys of being a bolshy crip”.

Albert says: “I miss him every day. He was a very unlikely, charismatic figure. He really lived a life. I have made him into my crip superhero.”

The Norwich Wheelchair Murders was, he says, an attempt “to explain disability to the world which was different to how anybody else had done it”.

One of its central themes is the extent to which disabled people are subjected to hate crime, something Albert started to become aware of while editing the monthly newsletter for the international disability rights charity Disability Awareness in Action, and from hearing about the experiences of other disabled people in Norwich, particularly those with learning difficulties.

As other disabled activists and artists – most notably Liz Crow – have done in recent years, he draws a parallel between the attitudes to disabled people in Nazi Germany that found its most brutal expression in the Aktion T4 programme, which saw the targeted killing of as many as 200,000 disabled people, and similar attitudes that have surfaced in recent years in the UK.

As one character in his novel says: “He said most disabled people were little more than a burden on themselves and the rest of us too. Scroungers, he called them, useless scroungers. Already half dead anyway.”

It was an attitude Albert noticed as a member of the Human Genetics Commission – between 1999 and 2005 – when he came across views that can only be described as “eugenics” but which had been “crafted in a medical way”, and suggested that “disabled people were not something you would want to choose”.

He said: “It’s gone much further now. It’s really scary stuff. That’s always in the back of my mind, because I was right there when it was all being trotted out and debated.”

Albert insists that the hateful attitudes espoused by some of the characters in his novel are not that different to the rhetoric spouted by some politicians.

He said: “Look at the all the stuff that’s coming out from the government.

“They are kind of painting us as very much like that, but not in that kind of stark language, but if you read the sub-titles that’s what you think.”

It is reflected, he says, in the everyday experiences of disabled people. “People I know have had nasty comments made to them about being a scrounger.”

He adds: “Look what the government has done in the last five years. All the stuff we have fought for, I have been fighting for for 25 years – lots of other people for even longer – has been rolled back. We are going backwards at the moment.”

He is still treasurer of Equal Lives, and has been active in the fight against public sector cuts that is a major feature of the organisation’s work – he says many disabled people in Norfolk are being “devastated” by the cuts – although these days in more of a backroom support role.

Indeed, just hours before Disability News Service’s interview with Albert, disabled activists and others staged a demonstration outside the headquarters of Norfolk County Council, in protest at further planned cuts to public services.

The Norwich Wheelchair Murders does not address government cuts and rhetoric head-on, and instead tries a more subtle approach, hinting at the backdrop of cuts that exists behind the lives of its disabled characters.

But Albert says he “absolutely” wants the book to deliver a wake-up call on disability hate crime.

“Those attitudes are out there,” he says. “This government has done nothing but stoke them, basically, while saying, ‘We are not against disabled people, we want to help them, they are the most needy,’ which doesn’t mean anything.” 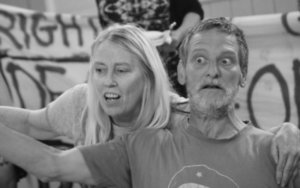 Disability Pride events ‘allow disabled people to celebrate who they are’