You are here: Home / Activism and Campaigning / Ofgem’s ‘very limited’ fuel price cap ‘will lead to deaths, ill-health and misery’ 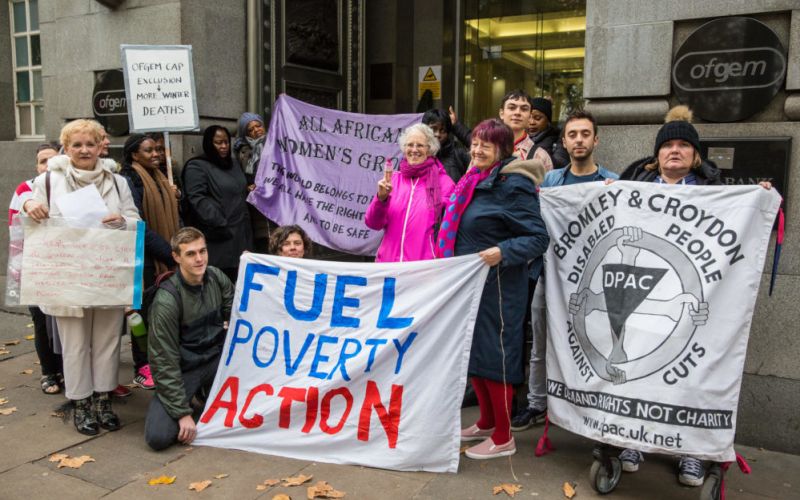 The energy regulator’s “discriminatory” plans to impose only a “very limited” cap on fuel prices will “will lead to deaths, ill health and misery” for hundreds of thousands of disabled people, say campaigners.

Fuel Poverty Action (FPA) and Disabled People Against Cuts (DPAC) have written to Ofgem – with backing from another 30 organisations – to call on it to expand its plans for a new “safeguard tariff”.

Under Ofgem’s plans, fuel bills will be capped for those already receiving the current Warm Home Discount (WHD), which offers certain eligible households £140 off their winter 2017-18 fuel bills.

The safeguard tariff should be in place by February 2018 and will help about one million households, with Ofgem hoping it will “provide some short-term relief for vulnerable customers, ahead of government plans for an energy price cap being realised”.

Ofgem says the new safeguard tariff could cut bills by £120 a year for the average user, so saving them more than £250 a year in total.

But FPA and DPAC point out in their letter that the WHD is only available on a “first come, first served” basis and so more than a million of those eligible will miss out – on both the discount and Ofgem’s new price cap scheme.

And some energy suppliers do not even offer the discount, so ruling their customers out of benefiting from both schemes.

Campaigners, including DPAC activists, were at Ofgem’s London headquarters on Tuesday (21 November) to hand over a letter raising their concerns (pictured), and calling for the scheme to be expanded to everyone eligible for the WHD, whether or not they receive the discount.

Other disabled people’s organisations and grassroots groups that signed the letter include Inclusion London, Disability Rights UK and WinVisible.

The letter warns: “Disabled people often need more heat, for medical reasons or if they are home a lot, and can suffer much worse effects if they can’t afford to keep warm.

“What’s more, they have been hit the hardest by multiple cuts to incomes and services, leaving them in a poor position to deal with rising fuel prices.”

And they add: “There is a real risk that people who don’t qualify for the cap will even see their fuel prices rise, as suppliers try to recoup the losses caused by a cap on their prices.”

They dismiss Ofgem’s insistence that the exclusions from the safeguard tariff are necessary in order to bring in the cap quickly, and say it could easily be extended before next winter.

They say: “Energy prices are too high for everyone now, and thousands of people in all sorts of situations are dying from cold every year.

“As the body responsible for customer protection, Ofgem should be acting on this now.”

In an earlier response to a consultation on Ofgem’s plans, FPA warned that disabled people set to miss out on the cap would “suffer the most pain, injury and illness (both mental and physical), and potentially even death, if they cannot afford the heat they need”, which FPA said was “shocking and unacceptable”.

Eventually, FPA wants to see the cap introduced for all energy customers, and not just those on low incomes.

An Ofgem spokesman said: “Protecting customers in vulnerable circumstances is a priority for Ofgem.

“In order to extend our prepayment safeguard tariff to vulnerable consumers as quickly as possible, we decided that consumers in receipt of the Warm Home Discount should initially be eligible.

“It would not be possible for suppliers to obtain more data to identify additional consumers who are potentially eligible for Warm Home Discount but who are not receiving the benefit, in a consistent and robust way in time for the initial extension in February.

“We recognise that the Warm Home Discount scheme does not target all the customers we would like to protect.

“However, a vulnerable customer safeguard tariff for these consumers will still provide protection for people who are already targeted as fuel-poor.

“We believe that protecting a smaller group sooner is better than waiting until we can protect a larger group.

“We are moving quickly to explore whether to extend the safeguard tariff to around another two million vulnerable customers who are not in receipt of the Warm Home Discount next winter and will be asking for views next month on the best way to identify them.”