You are here: Home / Arts, Culture and Sport / Oliver comes out of retirement to deliver stinging rebuke to ‘parasite’ charities 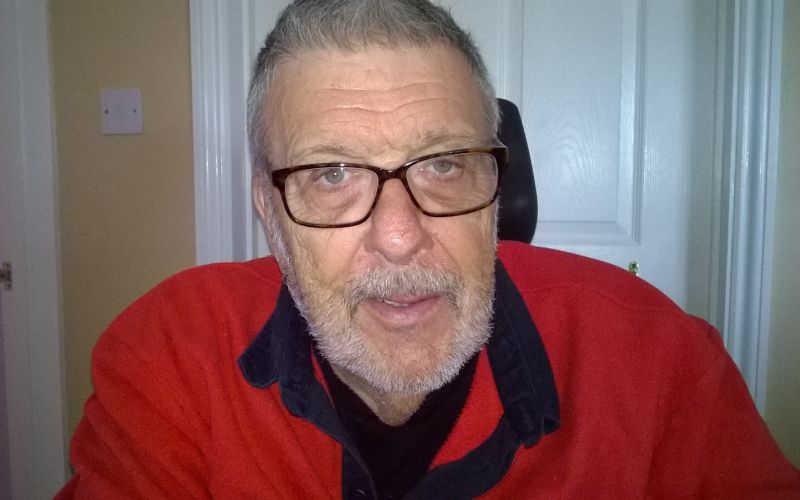 One of the key figures in the disabled people’s movement has come out of retirement to deliver a stinging rebuke to “parasitic” disability charities.

Professor Mike Oliver (pictured), the disabled academic who first defined the “social model of disability”, was speaking at an event hosted by the University of Kent last night (Wednesday), as part of UK Disability History Month.

The annual series of events was launched at a parliamentary event last week, and this year focuses on disability and art.

Those speaking at the launch included disabled comedian, activist and trainer Barbara Lisicki, who spoke about – and displayed – some of the tee-shirts designed and worn by members of the Disabled People’s Direct Action Network (DAN), and disabled artists Tanya Raabe-Webber and Tony Heaton.

Shadow chancellor John McDonnell spoke of the importance of challenging stereotypes and how austerity had made it harder for disabled people to “fulfil their artistic ambitions and articulate their views about society” and how they face discrimination.

In his speech in Kent yesterday, Oliver warned of the risk that disabled people’s shared history was being “rewritten” by charities and politicians to “suit their own interests and agendas”.

He mentioned Scope, and a series of films it produced in 2015 to mark the 20th anniversary of the Disability Discrimination Act (DDA), which failed to point out that, in its earlier incarnation as The Spastics Society, it had been “bitterly opposed to anti-discrimination legislation in the 1980s and only reluctantly came on board when it became obvious that such legislation was inevitable”.

He also referred to former Tory leader William Hague, who told the BBC that he regarded the DDA as one of his finest achievements, when in reality he had “turned the legislation into a pale shadow of what it should have been”.

Oliver was heavily critical of “the big disability charities”, which he said had “proved predictably useless at defending the living standards and lifestyles of disabled people” from the government’s “vicious attacks, while continuing to do very well for themselves”.

He referred to the phrase “parasite people”, once used by the disabled activist Paul Hunt to describe those “who furthered their own careers on the backs of the struggles of disabled people to lead ordinary lives”.

Oliver said that these charities need disabled people “to be dependent and tragic, otherwise there is no justification for their existence”.

He told Disability News Service (DNS) before delivering the lecture that many of the big charities (although he was not attacking the individuals who work for them) – including Leonard Cheshire Disability, RNIB, Scope and others – were “parasitic on the lives of disabled people, and their attempts to reposition themselves as defenders of disability rights are an attempt to disguise this”.

He also included Disability Rights UK (DR UK), despite it being a user-led disabled people’s organisation, and he told DNS that one of its representatives recently spoke publicly “on how important it was to write letters to our MPs and government, as if (Oliver said) that hasn’t been happening for many years without changing much”.

He added: “If that’s their idea of political activism then yes, they should be included in my criticism, even if they are user-led.”

Philip Connolly, DR UK’s policy and development manager, said it was him who Oliver had heard speak at the UK premiere of the documentary film Defiant Lives.

He told DNS yesterday that he had “a long record myself in non-violent direct action so would never suggest that the only legitimate way of obtaining change is letter writing”.

He said: “Mike Oliver has never to my knowledge been in touch with me or Disability Rights UK so is not in a good position to pass judgement on us.

“He would be welcome to get to know us, and our CEO Kamran Mallick is willing to meet with him.”

He added: “I wouldn’t criticise those engaged in non-violent protest or those who write letters either; when we win it’s usually because of both. I did say this at the cinema and no-one took issue with me there.”

Oliver also spoke in his speech of how the Paralympics and the Invictus Games, the sports event for disabled veterans created by Prince Harry, are used by the government as political cover.

He pointed out that “not all injured ex-service men and women can or want to compete in elite sport and many who don’t live lives of deprivation, poverty and misery”, while the government is able to continue sending young people to “often illegal wars to get blown apart for their country”.

He told DNS: “The government among others are using disability sport to deny the reality of many disabled people’s lives and disguising the reality of their failure to provide proper medical and rehabilitation support for many servicemen and women injured in wars that are sometimes illegal.”

But he made clear that he was not blaming the organisers of the games, and did not mention Prince Harry by name in the speech, and pointed out that his own rehabilitation from a spinal cord injury more than 50 years ago owed much to disability sport (he won table-tennis gold and bronze medals in the international Stoke Mandeville games that were a forerunner of the Paralympics).

Oliver also said in his speech that disabled people needed to be careful of rebranding disabled people’s history as a struggle for rights, when “it has always been much broader than that”.

He said: “Rights on their own are easily incorporated into the agendas of governments without requiring them to change very much at all.”

He highlighted the UK government’s “post truth” claim that it was a world leader in disability rights, after the UN’s committee on the rights of persons with disabilities published a “damning report” in August in which it accused the government of “going backwards” on independent living.

And by positioning disabled people as “pathetic victims”, he said, the government had managed to launch “a massive attack on services and benefits for disabled people” while claiming that its “relentless assault on the living standards of disabled people is nothing of the kind but a heartfelt attempt to take public money away from scroungers and fraudsters and give it to the most severely disabled people who really need it”.

He concluded that disabled people needed to take responsibility themselves for “attacking the disabling barriers we face”.

He said: “What disability history teaches us is that we cannot rely on the bleeding hearts brigade and parasite people to do it for us.

“We have to do it for ourselves. We have to insist that our personal troubles are public issues that need to be resolved.”

Oliver also spoke about the divide that developed in the 1970s and 1980s between organisations controlled by disabled people – such as the Spinal Injuries Association and the Union of the Physically Impaired Against Segregation (UPIAS) – and “those that were about us but definitely not controlled by us”, such as Disability Alliance, which later merged with RADAR and the National Centre for Independent Living into DR UK.

He said his life had been changed by a UPIAS booklet, The Fundamental Principles Of Disability, published in 1976, which argued that “the root cause of our problems was the way society was organised and the disabling barriers we faced”.

This meant, he said, that he “no longer had to accept full responsibility for my impairment” and “now understood that my personal troubles were also public issues”, an insight that led him to develop the social model of disability.

He also spoke last night (Wednesday) about the part played by the University of Kent in developing the disabled people’s movement.

Oliver studied sociology and social anthropology at the university in the early 1970s, at a time when it was physically “unwelcoming” to a wheelchair-user, in contrast to the attitude of the staff and fellow students in the “generous times ushered in by the economic and cultural revolutions of the 1960s”.

He stayed on after his degree to complete his PhD, and to teach a masters course for professionals working with disabled people, which is believed to be the first postgraduate course in “what later became known as disability studies”.

At the time, he said, most writing on disability “was dominated by assumptions that disability was a medical problem and the focus was on illness and impairment”, and any personal focus was on disabled people as “tragic victims”, with the stereotype reinforced in popular culture through the “triumph over tragedy” genre.

He had wanted his masters course to challenge the idea that professionals working with disabled clients should focus solely on their “personal troubles and not how and why they were linked to public issues”.

Oliver’s first book, Social Work With Disabled People, published in 1983, introduced the social model of disability to a wider audience, and within five years, he said, “had become the mantra for many disabled people’s organisations and was beginning to make its way into official government documents”.