You are here: Home / Independent Living / Ombudsman warns of sharp rise in complaints about care charges

An ombudsman has warned of the sharp rise in complaints he has received about how local authorities in England are charging disabled people for their care and support.

Michael King, the Local Government and Social Care Ombudsman, said there had been a nine per cent increase in complaints about adult social care charging over the last 12 months.

The ombudsman warned that the complaints he was dealing with on adult social care were no longer just “one-off mistakes” but were increasingly about the “systems and policies” of local authorities.

He said he had become “increasingly concerned” about the way some local authorities were “handling the need to balance the pressures they are under with the way they assess and charge for care”.

In his annual review of social care complaints, King said he had been upholding two-thirds (67 per cent) of complaints about charging, which was higher than the rate for adult social care (62 per cent), and for all complaints the ombudsman investigates (57 per cent).

He said: “Assessment and care planning, and how care is paid for, remain some of the biggest areas of complaint.

“Even more concerning is that the issues we see demonstrate a shift from one-off mistakes to problems with whole systems and policies, or procedures being incorrectly applied.

“We know authorities are operating under an enormous amount of pressure and financial challenge to deliver care services.

“The stark reality of this is now playing out in the complaints we see.”

The Local Government Association refused to comment on the ombudsman’s criticism of local authorities’ care charging policies and performance.

The ombudsman’s report comes just two weeks after a report from the Independent Living Strategy Group (ILSG) found that charging disabled people for their care and support was driving many of them into debt and forcing them to cut their spending on food or heating.

The ILSG study found that four in 10 (41 per cent) of those responding to a survey had experienced a substantial increase in charges over the last couple of years.

Jenny Morris, an ILSG member, said: “The increase in complaints to the ombudsman about charging for care and support comes as no surprise to the Independent Living Strategy Group.

“Our survey found that many people are facing substantial increases in charges, many are cutting back on essentials like food and heating, and some are forced into debt.

“The Care Act was all about ensuring people’s well-being but charges are effectively a tax on disability and old age and are having a negative impact on well-being.” 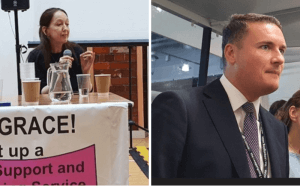