You are here: Home / Politics / Paper calls for political parties to move from ‘one in 129’ to ‘one in five’ 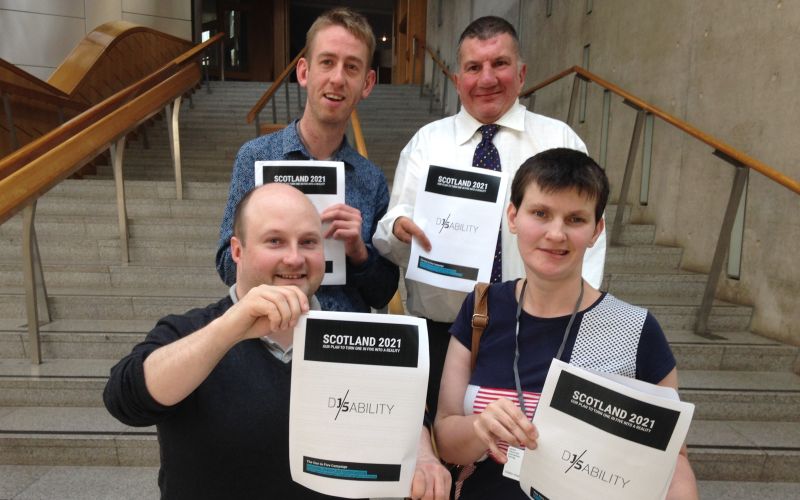 A user-led campaign has called on Scotland’s political parties to do more to increase the number of disabled people elected as MSPs at the next election in 2021.

The cross-party campaign One in Five published a discussion paper this week which includes a series of idea for producing a more representative Scottish parliament.

The paper’s launch was supported by Conservative Jeremy Balfour, who is so far the only MSP of the 129 elected in May to self-identify as a disabled person, although One in Five said that one other MSP has spoken of having a significant impairment.

Balfour pledged this week to help other disabled people secure election to the Scottish parliament.

The discussion paper, Scotland 2021: Our Plan To Turn One In Five Into A Reality, points out that if the Scottish parliament was representative of its population, there would be 23 disabled MSPs.

Balfour yesterday (3 August) lodged a parliamentary motion that highlights the discussion paper and calls on all of his fellow MSPs to undertake disability equality training.

The discussion paper welcomes the £200,000 Democratic Participation Fund for Disabled People, which was launched by the Scottish government in February and will pay for some of the extra costs faced by disabled people who want to stand in next year’s local government elections.

But it calls on Scotland’s political parties to do more to make their work more accessible.

Among the ideas included in the paper, it says parties should hold meetings in accessible venues, and embrace new technology by live-streaming events and important meetings.

It also calls on political parties to set up their own disabled members’ groups, and to create positions on their national executive committees for a disability officer, while also appointing a disability spokesperson in parliament.

The paper says it is “imperative” that every MSP undergoes disability equality training, and that political parties should track the number of self-identifying disabled elected representatives, including councillors, MSPs, MPs and MEPs.

The paper adds: “Let’s work our socks off so that when we wake up the morning after the 2021 election we switch on our TVs to a sea of disabled talent. We can be the Nation that does it. We can lead the way.”

Balfour said: “Disability comes in many different forms and any training that can help MSPs better engage with their constituents is to be welcomed.

“That’s why I have raised a parliamentary motion recognising the One in Five campaign’s discussion paper and welcome the [participation fund].

“I also hope to encourage my parliamentary colleagues to undertake disability equality training when we return from recess.”

Ryan McMullan, a One in Five ambassador and a member of the Scottish Labour party, said: “Our discussion paper demonstrates disabled people face more than just financial barriers to politics and we hope our paper illustrates what can be done to remove the non-financial barriers.”

Deborah King, co-founder of Disability Politics UK, welcomed the discussion paper, but said she would also have liked it to call for legislation to allow job-sharing for MSPs, MPs and councillors.

She said that UK political parties at Westminster were also failing to capture basic data about the number of their MPs who were disabled.

The Speaker’s Conference on Parliamentary Representation, which reported in January 2010, called, among its 71 recommendations, for all parties to detail how many of their MPs were disabled people, women and from an ethnic minority.

It also called for political parties to publish regular online reports on the candidates they selected to fight seats, including whether they self-identified as disabled people.