You are here: Home / Politics / Boris Johnson spends £2.6 million on media facilities… with an inaccessible stage 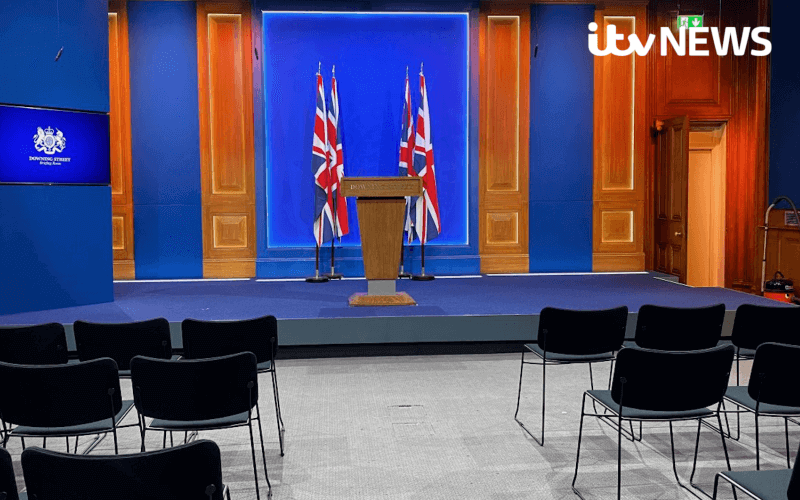 The prime minister is facing questions over why he authorised spending of £2.6 million on creating a new Downing Street media briefing room which has a stage that is inaccessible to wheelchair-users.

Photographs emerged this week which showed a raised stage – accessed by steps – where the prime minister’s press secretary will deliver daily televised briefings to the media.

The pictures show that Downing Street failed to ensure step-free access to the platform.

Disability News Service confirmed yesterday (Wednesday) that the stage (pictured, above) is not step-free and that anyone with a mobility impairment who needed to address the media would have to use a removable ramp.

It is thought likely that the facilities will eventually be used by ministers, the prime minister and senior civil servants, as well as on a regular basis by Boris Johnson’s press secretary, Allegra Stratton.

Baroness [Jane] Campbell, a disabled crossbench peer and wheelchair-user, said yesterday: “A removable ramp is yet another bolt-on adaptation because nobody assumes there will ever be a disabled wheelchair-using prime minister.”

She said the failure “sends out a clear message that, yet again, disability access is an afterthought”.

She added: “We know that this briefing room platform will be used be civil servants and press secretaries, so yet another assumption that they will be fully ambulant.

“When will this discrimination by indifference end? It’s just not good enough. Are we really still that invisible?”

Deborah King, co-founder of Disability Politics UK, said the failure showed that “disabled people are not thought of as equals in the political decision-making process” and that disabled civil servants and politicians were being “systematically excluded from politics”.

She pointed to the UN Convention on the Rights of Persons with Disabilities, which the UK has ratified and which guarantees disabled people the right to participate in political and public life “on an equal basis with others”.

The government appears to be arguing that there was not enough space to provide permanent step-free access to the stage, although that appears unlikely from the photographs, originally published by ITV News.

Asked this week if the image of an inaccessible platform sends a message that disabled people are still excluded from, and are not welcome within, high political office and senior positions in the civil service, a spokesperson for the prime minister refused to comment.

The failure to ensure step-free access to a government facility that will be seen daily around the world has echoes of Downing Street’s continuing refusal to ensure a wheelchair-accessible front entrance to 10 Downing Street.

But it also comes as the government continues to sit on a report that is expected to expose the barriers faced by disabled people in accessing elected office, and the discrimination they face at the hands of political parties.

That report, commissioned by the Government Equalities Office, was completed in December 2019 but has still not been published.

Meanwhile, it is unclear whether the new media briefing room will finally ensure that televised government briefings will include a British Sign Language (BSL) interpreter on the stage.

Although the government will ensure there is BSL interpretation for the briefings, it is not clear whether this will continue to be provided through the BBC News Channel’s in-screen interpreter or, as demanded by BSL-users, through an on-stage interpreter.

Both Baroness Campbell and Deborah King highlighted the importance of having an on-stage BSL interpreter.