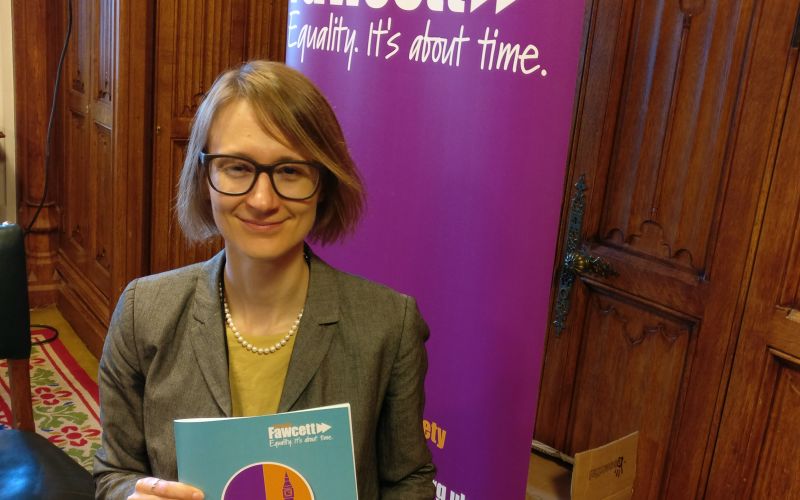 Laws that prevent job-sharing MPs are discriminating against disabled people who can only work part-time because of their impairments, a parliamentary meeting has heard.

The meeting marked the publication of Open House?, a pamphlet by the Fawcett Society, which makes the case for a change in the law to allow two people to share the job of an MP, which the charity believes would lead to more disabled people, parents with children, and carers entering parliament.

Clare Phipps (pictured), the disabled chair of the Green party’s national executive, who has co-authored one of the chapters, told the meeting that she was only able to work part-time because her impairment – she has a chronic sleep disorder – means she sleeps 12 hours a day.

She said: “It is physically impossible, no matter what adjustments are made for me, to work in parliament as an MP on a full-time basis. That simply would not be possible.

“It is not clear to me why there is such a big barrier in place, which means I literally cannot be an MP.”

She added: “There are a significant number of people who are disabled and who do need to work part-time and would need to job share to be in parliament.”

Phipps and fellow Green party member Sarah Cope – who has caring responsibilities for her two disabled children – attempted unsuccessfully to stand as job share candidates at the 2015 election.

They subsequently lost a high court bid to seek a judicial review of that decision, having argued that the current law was incompatible with the European Convention on Human Rights and the Equality Act.

But they were encouraged that the judge suggested that it was an issue that parliament needed to address.

Phipps told the meeting that if parliament now failed to act, there was a much stronger chance that the next legal case would be successful.

And she said that the obstacles raised by those opposed to allowing job-sharing MPs were “not insurmountable”, as they had been overcome across the private and public sector, including in senior positions in the Civil Service.

Phipps told Disability News Service (DNS) after the meeting that it was “sad” that parliament, the institution responsible for drawing up equality legislation, was “not following its own rules”.

She said: “It is incredibly discriminatory. I literally cannot do this without a job share.”

Deborah King, co-founder of Disability Politics UK, which campaigns for MPs to be allowed to job share, and who herself was prevented from standing for parliament on a job share basis in 2010, welcomed the report.

She told DNS: “We’ve had a number of people who have tried to stand as job share candidates for MP and had their nominations rejected.

“In response, we’ve had a paper petition, two online petitions, letters to the national press, a private member’s bill, a high court case and now a pamphlet.

“Two parties, the Greens and the Liberal Democrats, now have job-sharing for MPs as party policy.

“We therefore need to change the policy of Labour and the Conservatives and other parties, including the SNP.

“I would encourage all readers to study the pamphlet, and send the link to the report firstly to their own MP and secondly to a member of the shadow cabinet or the cabinet, and ask them to change the law.

“People need to visit their own MPs in their surgeries and say how important this change is.

“Eventually we will get the law changed and the Commons will become more representative.”

Emily Brothers, the first blind woman to stand for election to parliament, when she fought the Sutton and Cheam seat in 2015, has also written a chapter for the Fawcett Society pamphlet, in which she says the representation of disabled people in parliament is “woeful”.

She says that only six MPs have self-identified as disabled people, whereas proportionate estimates by the Equality and Human Rights Commission suggest there should be 65 disabled MPs.

She argues that job-sharing is one of a range of measures that would improve disabled people’s participation in political and public life.

But Brothers told DNS after the meeting that introducing job-sharing would be “in many ways pointless” for disabled people if the government failed also to introduce measures to address the extra campaigning costs faced by many disabled candidates, following the closure of the Access to Elected Office Fund in 2015.

She added: “It is an idea in the making and it will come in time but I don’t think it will come any time soon, unfortunately.”