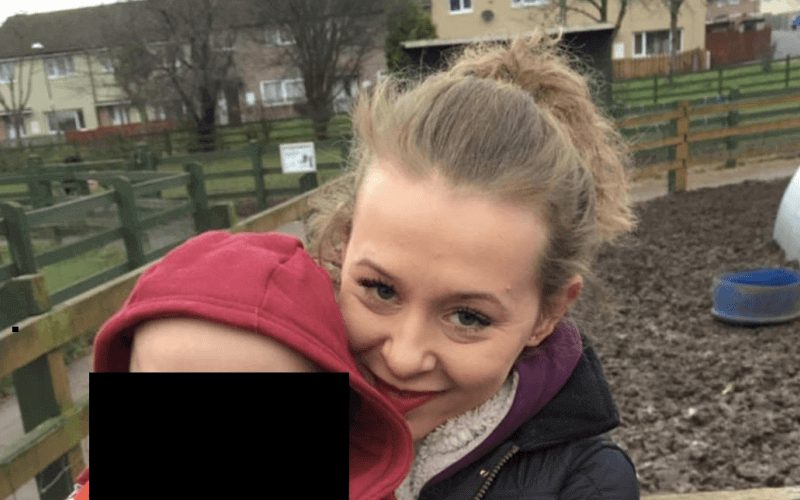 Evidence from Department for Work and Pensions (DWP) staff to an inquest has revealed a series of failings in dealing with the disability benefit claim of a young disabled mother, in the months leading up to her apparent suicide.

Assistant coroner Gordon Clow made clear at the start of the inquest into the death of Philippa Day – who had a long history of self-harm and suicidal ideation – that he would examine the extent to which problems with her personal independence payment (PIP) claim had caused her mental distress.

Yesterday (Wednesday), the inquest heard from two DWP staff members who worked on PIP claims at the time, one of them a telephone agent and the other a more senior decision-maker.

Philippa (pictured, with her son) was found unconscious by her sister and father on 9 August 2019 after months experiencing significant distress about the way DWP was dealing with her benefits, and then the insistence of Capita, a DWP contractor, that she would need to attend a face-to-face interview at an assessment centre.

She had been diagnosed with type one diabetes when she was 18 months old, and later with emotionally unstable personality disorder (EUPD), anxiety, depression and agoraphobia.

The inquest heard that she lived a “chaotic” life characterised by repeated self-harm, suicidal ideation, frequent admissions to mental health inpatient units, and drug and alcohol misuse, but with constant, dedicated and close support from her family and mental health professionals, including community psychiatric nurse (CPN) Tessa Rand.

Philippa, who was 27, had been claiming disability living allowance (DLA) for her diabetes since she was 16 but had started a new claim for PIP in November 2018.

Her application form appears to have been lost by DWP, the inquest heard, after she posted it in January 2019, and her DLA was stopped that month because she had failed to return it.

Because of the challenges she faced linked to the EUPD, she only realised her benefits had been stopped in March 2019, and then had to start another new claim, the inquest heard.

Jane, a DWP telephone agent at the time but no longer working for the department, described taking a call from Philippa on 11 June 2019, as she tried to find out why her benefits were still suspended.

The inquest heard that Philippa, from Nottingham, had told the agent that she was “literally starving and cold”, “genuinely can’t survive like this for much longer”, was “in so much debt”, “literally cannot leave the house”, and needed “a reason to live”.

But Jane told the inquest she had heard many claimants expressing distress after losing their benefits because they had not returned the correct forms.

She also admitted that Philippa had been “sobbing” during the call.

Barrister Sam Jacobs, representing the Day family, said: “Help us understand why you wouldn’t raise that with the case manager.”

Jane told him: “I can’t remember… why I wouldn’t have raised it.”

Asked if she had passed any information to Capita, she said: “I’m not sure.”

Jane said that telephone agents were not allowed to keep a claimant on hold for longer than three minutes if they wanted to raise immediate concerns with a case manager, and would instead have to offer a call back within 48 hours.

She also said that telephone agents who spent an average of more than six minutes on calls with claimants were spoken to by their team leader at monthly meetings.

Jacobs suggested there was no acknowledgement by Jane of Philippa’s distress during the call.

He asked why she had not followed DWP’s “six point plan” – which instructs staff how to deal with statements by customers that they intend to self-harm or take their own lives – even though Philippa was in “significant distress” and had said she was “cold, starving and needing a reason to live”.

But Jane said Philippa had appeared “content” at the end of the call that she would need to speak to Capita about the assessment for her new claim.

She said this was why she did not make any attempt to “escalate” any concerns about her mental distress.

She also said it was “quite usual” to hear claimants crying.

The inquest also heard from a DWP PIP case manager, who examined Philippa’s case in March 2019 and confirmed the decision to stop her DLA payments.

She was questioned on why no “additional support” marker had been placed on Philippa’s file, despite her significant experience of mental distress and a note in her file which stated she was “quite unwell with mental health”.

She said DWP guidance on support markers had now changed and staff now “look at people’s conditions and gather further information to see if they need additional support”.

She claimed the department had now “become more holistic and empathetic about how we deal with these sorts of things” and that staff had been told that they can “follow the PIP instructions not quite as stringently as we used to”.

The case manager agreed there was nothing in the records to show if Philippa was asked for more information about her mental health.

She also admitted that information about Philippa’s history of mental distress that was passed to DWP in a call made to a telephone agent the previous week by a CPN colleague of Tessa Rand had not been available to her when making the decision on her claim.

DWP’s files mistakenly showed that that call had been made by Philippa, and not a CPN.

Jacobs asked if she would have sought further information from the CPN if that call had been recorded accurately.

She said: “Yes, I would probably have phoned the CPN to gather more information.”

The inquest continues and is expected to end next week.