You are here: Home / Activism and Campaigning / Praise for cake shop chain that admitted access faults, and put them right 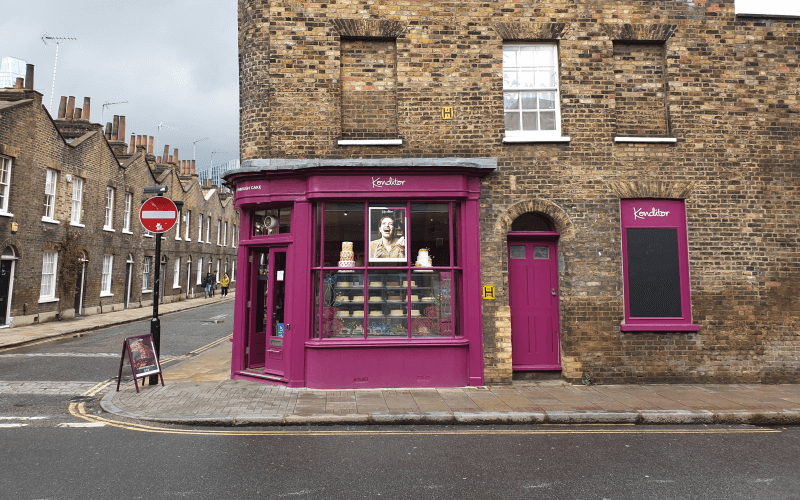 A chain of cake shops has thanked a disabled campaigner for drawing its attention to access failures that prevented wheelchair-users entering three of its stores.

Konditor said it was “ashamed” of its previous access failings and has apologised to “anyone who has visited [our] shops in the past and been unable to gain access”.

It has now pledged to make a financial donation to a London disabled people’s organisation (DPO) after admitting it was previously unaware of its duties under the Equality Act.

The access failings were spotted by Esther Leighton, co-founder of the disabled-led campaigning organisation Reasonable Access, after she was unable to enter three of its six London stores.

After she raised her concerns, with support from Reasonable Access members, Konditor agreed to improve access at the three stores, providing each of them with low-cost portable ramps that allow wheelchair-users to cope with single steps at their entrances.

Now Konditor is backing Inclusion London’s Disability Justice Project, which supports London DPOs to use the law to make disabled people’s rights to independent living and access to goods and services a reality.

Konditor will donate 20p to the project every time it sells one of its most popular cakes over the next six months.

Leighton said she had asked Konditor repeatedly to buy ramps for its inaccessible stores.

In similar situations, she has taken the service-provider to court, but once the problem reached the company’s head office, she said, “Konditor turned the situation around”.

She said: “They fixed the problem, made amends including by selling cakes for the Disability Justice Project, which is a cause close to my heart, and so I look forward to being a loyal customer for many years to come.”

Leighton said: “I have an ongoing frustration with high street shops without step-free access, particularly when this can often be fixed with a simple ramp available online for as little as £50.

“I am unable to get up even small steps, so this is a barrier which unnecessarily limits me.

“Despite the Equality Act 2010 duty being very clear that shops should have ramps, many do not do so.”

She added: “I find being denied access to businesses, particularly luxury ones like this, utterly demoralising; it makes me feel like a second-class citizen and it makes me frustrated that 24 years after the law said that ‘reasonable adjustments’ (like a ramp) should be made, that they are not.

“I find trying to enforce my rights very difficult, too.

“Sometimes I need to go all the way to court (as it’s usually impossible to get lawyers for such cases) and this is costly in time and money, as well as upsetting.

“However, it’s often the only way to get this change made, so there isn’t an alternative to ensure I and other disabled people are treated better.

“In Konditor’s case, I am really delighted that they made the situation right and this wasn’t necessary.

“They’re also keen to share with other businesses the many positives of making changes that ensure a welcome for all people, which makes me happy as it’s improving the world for everyone.”

She encouraged other disabled people who are angry at not being able to access a service, even after asking for improvements, to use the law to help bring about change.

She said: “You don’t need to be a lawyer to do this, though you do need to have time and be able to deal with sometimes complex paperwork.”

Leighton encouraged disabled people to contact Reasonable Access – which supports disabled people who are using the law, particularly the Equality Act 2010, to advance disability rights – if they want to speak to others who are taking such action, and also to contact their local MP.

But she said they should also campaign for a more effective enforcement mechanism, and she added: “Changes this basic could be enforced by the local council, for instance, rather than requiring individuals to do it.

“That would be better for businesses and disabled people.”

“If other providers of goods and services had similar attitude, everyday experience of many disabled people would be very different.

“However, it is important to remember that Konditor took those steps because Esther Leighton explained to them what is required by the duty to make reasonable adjustments.

“This shows how much work still needs to be done to ensure providers of goods and services, including small businesses, understand their duties under the Equality Act and comply with it.

“We know access is good for everyone and we hope this example will encourage many more businesses to adopt a similar approach.”

Paul Cons, Konditor’s chief executive, said: “Until Esther bought this issue to our attention, I’m ashamed to say we had simply not fully considered the needs of our disabled customers or realised what was required of us by law.

“This has been a welcome wake-up call for us and we’re glad to have addressed this issue in the business.

“Thanks to a passionate campaigner like Esther, we’ve made the changes, but feel she shouldn’t have had to bring it to our attention in the first place.”

Picture: One of the three stores Esther Leighton was unable to enter