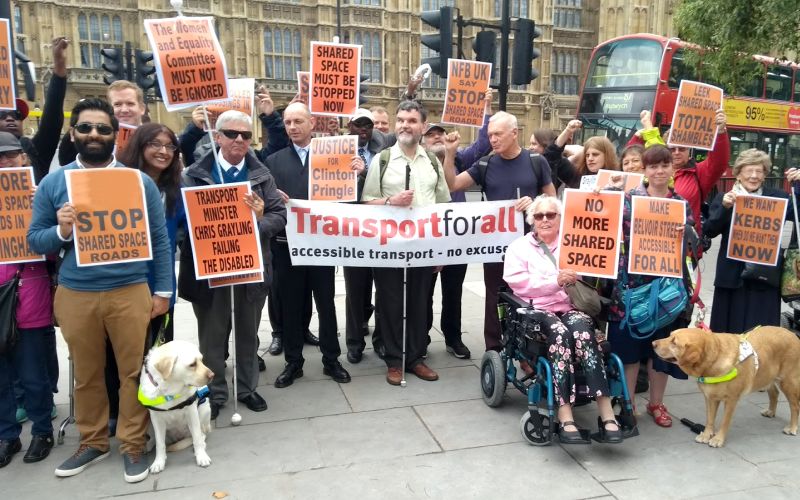 Campaigners from across the country gathered outside parliament this week to call for an end to unsafe “shared space” street designs, which risk turning public spaces into “no go zones” for many disabled and older people.

The protest (pictured) was organised by the National Federation of the Blind of the UK (NFBUK), and attended by members of Transport for All (TfA), and campaigners from Save Our Green Lanes, Enfield Town Residents Association and East Dunbartonshire Visually Impaired People’s Forum.

They were joined by Michael Pringle, whose three-year-old son Clinton was killed after he was hit by a vehicle in a shared space scheme while on holiday in Jersey last year.

Protesters later delivered a letter to the prime minister at Number 10, which calls for an end to all shared space street developments.

Shared space schemes usually remove kerbs and controlled crossings, encouraging vehicles, pedestrians and cyclists to share the same space, but posing greater risks for partially-sighted and blind people, as well as other disabled people, including many of those with mobility impairments, learning difficulties or who are deaf.

The NFBUK letter also calls for standard height kerbs and controlled crossings to be retained in all street schemes; an audit of all existing shared space developments, and for them to be made “accessible for all”; and for the current shared space guidance to be replaced with an “inclusive design approach”.

On one occasion, she was walking to the Albert Hall along Exhibition Road, a shared space scheme, and had to ask a stranger to walk with her because she felt so frightened.

She said: “I felt terrified. I felt as though I was walking in the middle of the road, but I wasn’t.

“I don’t think I would do it again unless I really, really had to. At any point, I felt as if a car could drive into me.

“Even when I think about it now it makes me feel so anxious.”

On another occasion, her guide dog Carrie was walking with her along High Street Kensington – another shared space scheme – and because there was no kerb she led her in front of a car, which fortunately stopped before it hit them.

Karl Farrell, from Hackney, north London, who also took part in the protest, and is a member of both NFBUK and TfA, said that shared space areas produced “an unequal contest” between cars and pedestrians, particularly if the pedestrian was blind.

He said: “Losing controlled crossings… these crossings are important because you know where you stand with them, you know what your position is, and you proceed to cross when you have the right of way.”

But with shared space-type “courtesy crossings”, he often has no idea when to cross, because cars can be very quiet, as are cycles.

He said: “In that situation, I might be stepping out into danger.”

Earlier this summer, five NFBUK members hand-delivered a letter to the prime minister to ask for an independent inquiry into shared space developments “in order to regain the rights of residents to walk their town streets once again without needing to negotiate right-of-way with drivers of moving vehicles by sight, a task which is impossible for blind and vision-impaired people to carry out”.

“The government must act to stop our public spaces from becoming no go zones for disabled and older people.”

Last month, the Department for Transport’s draft transport accessibility action plan – which is out for consultation – said the department was working with the Chartered Institution of Highways and Transportation on a review of shared space and other street design projects, which aims “to provide clarity on how such schemes should be designed and developed”.

The action plan says the review should “reinforce to designers that improving inclusivity is not just one of many objectives for a scheme, but must be embedded within the process”.

DfT says in the draft plan that it will “consider the need to revise guidance in the light of those recommendations”.