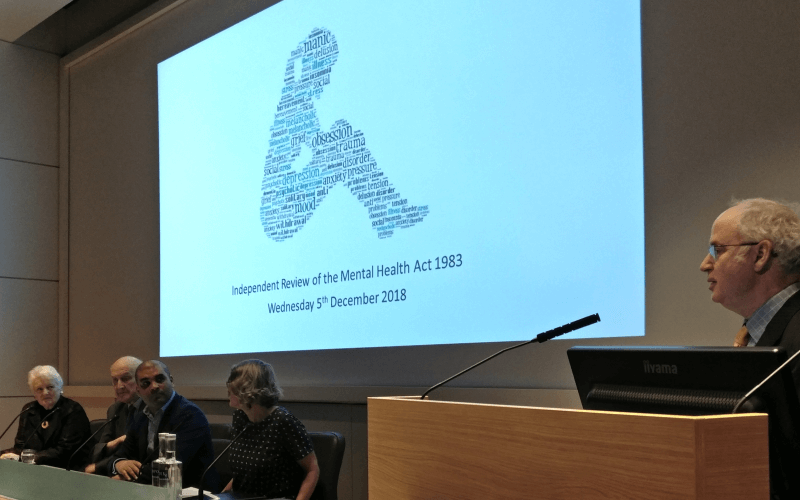 Disabled campaigners have raised concerns about a Mental Health Act reform bill which the government plans to introduce in the new session of parliament.

Although many of the proposals to be included in what will be a draft bill were widely welcomed this week, there were concerns at the government’s refusal to push for “full human rights” for people with mental distress.

The bill is one of 38 included in this week’s Queen’s speech, which was delivered by Prince Charles on behalf of the UK government and describes its parliamentary plans for the next 12 months.

The draft reform bill will be based on a white paper published in January 2021, which was put out to consultation, with the government publishing its response last July.

The white paper aimed to deliver “major reform” of the Mental Health Act (MHA), providing service-users in England and Wales with more control over their care and treatment, and ensuring the act’s powers are “used in the least restrictive way”.

It also aimed to address the disproportionate detention of people from black, Asian and minority ethnic communities, and the use of the act to detain people with learning difficulties and autistic people, as well as improving the treatment of people with mental distress within the criminal justice system.

Rates of detention under the act have nearly doubled since 1983.

Details in a briefing paper (PDF) published alongside the Queen’s speech this week showed the draft bill will mirror the aims of last year’s white paper.

The briefing paper includes references to personalised care, advocacy, choice and control for service-users, addressing the “disparities” faced by people from minority ethnic backgrounds, improving the treatment of offenders, and ensuring that “detentions only happen where strictly necessary”.

Although many of last year’s white paper’s proposals were welcomed, it built on recommendations made by Sir Simon Wessely’s independent review of the Mental Health Act in 2018, which was criticised for falling “significantly short” of recommending full human rights for people in mental distress.

Dorothy Gould, co-founder of the user-led, rights-based organisation Liberation, said the “underlying problem” with the government’s plans was that it had opted to make “improvements” rather than attempting “root and branch reform of the current, fundamentally flawed system”, which will mean service-users will “continue to experience injustice and oppression”.

She said: “The proposals [laid out in this week’s briefing paper] fail to address the need for a radical resolution of the social ills so strongly underpinning acute distress and trauma.

“Instead, the proposals draw on a flawed, medical model approach which (conveniently for the government) attributes ‘mental illness’ to individual brain disorders.

“The focus on expanding clinical services instead of introducing the full range of badly-needed, holistic and societal resources compounds the problem.”

Gould said that a reduction in the number of patients detained under the act would be “a move forward”.

She said: “Greater choice for patients will be important, if it genuinely happens.

“However, all patients should have an equal right to this, regardless of supposed ‘capacity’.”

She added: “The recognition of major inequalities for racialised communities is vitally important.

“But there will only be real change if the government also addresses the flaws of a mental health system based on a white, western, medical model with all its links to colonialism, and acknowledges, instead of denying, the reality of institutional racism.”

Mary Sadid, policy officer at National Survivor User Network, said: “There are many questions that remain about the shape our mental health system should take.

“For some, the answer lies in the UNCRPD (UN Convention on the Rights of Persons with Disabilities) and the abolition of detention.

“As the government moves towards gutting the Human Rights Act in favour of a bill of rights, the ‘implementation gap’ between the UNCRPD and our reality becomes wider still.

“Our current context in mental health care is one of coercion and also of exclusion.

“When we contextualise this with the current suite of legislative changes, we can see that those who are already marginalised will continue to bear the brunt.

“The path ahead is not straightforward, and there are many who are deeply impacted by the system who are not part of conversations about reform.”

She added: “Some of the changes cited in yesterday’s Queen’s speech regarding the draft Mental Health Act reform bill are welcome and necessary, including the introduction of a nominated person*, statutory care and treatment plans and a time limit for transfers from prison to hospital for acutely ill prisoners, something that is urgently needed.

“However, what underlies the bill is a lack of substance and ambition, and we are concerned about how many of these proposals will be operationalised without significant resourcing.

“In the current climate of limited access to care and unsafe staffing levels, it is difficult to imagine these changes making a material difference to those being detained under the act.

“In particular, on institutional racism, it is unclear how and if the bill will address disproportionality in detention under the Mental Health Act and community treatment orders.

“We are left with the same problem we started with – an unclear path to genuine care for those experiencing mental distress.”

*The briefing paper says the bill will allow patients to choose their own ‘nominated person’, rather than have a ‘nearest relative’ assigned for them

Picture: Simon Wessely speaking at the launch of his review in 2018