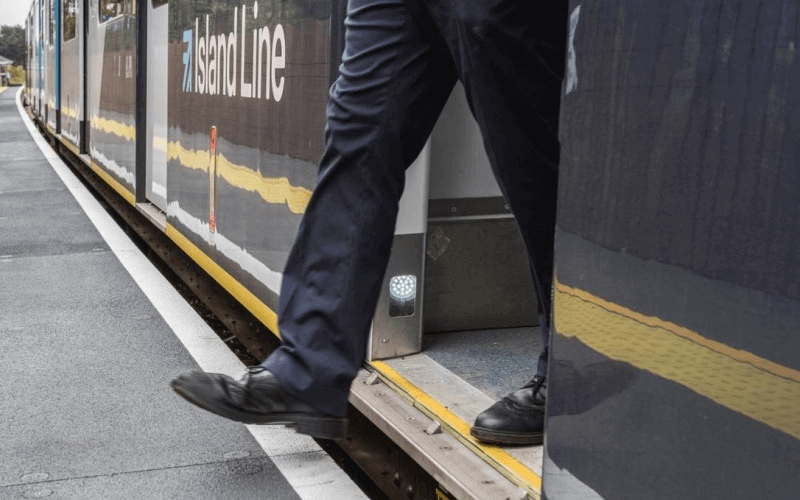 A major programme to improve access to rail services on the Isle of Wight has left disabled campaigners feeling let down and frustrated after they discovered that a train operating company had broken its promise to introduce level access boarding.

South Western Railway (SWR) had pledged that its £26 million upgrade programme on the eight-station Island Line would provide newer trains, “modernise the rail experience” for passengers, and provide a “real improvement”.

A graphic on its website, published as far back as September 2019 and tweeted at the time by the island’s Tory MP Bob Seely, also included a promise to “provide level access” by adjusting platform heights.

Media coverage from 2019 mentioned that the programme involved “creating level access from the train to the station platform”, while an article from another rail publication last year stated: “Level access will be provided at most stations, although ramps will need to be deployed for wheelchairs at a couple of locations.”

But when the Island Line reopened last week, SWR announced only that adjustments had been made “to reduce the gap between the train and the platform to improve accessibility”, rather than eliminating the gap as it had previously promised.

SWR also produced a new graphic that said platform heights had been adjusted to “improve accessibility” rather than “provide level access” from platform to train.

SWR now insists that creating level access across the network was never part of its plan.

Instead, trains at six of the stations are level with the platform, but still have a horizontal gap, it says, which means that ramps are still necessary for wheelchair-users to board trains at every one of the line’s eight stations.

Bren Flood, a disabled transport enthusiast who highlighted the concerns, said: “I think it’s a huge let-down, not only for residents of the island but also the many visitors who use the rail service.

“Having a fully accessible line is what was promoted to people as part of the upgrade works; what has been delivered is very much not.”

He said that to still have stations with “supposed level boarding but noticeable gaps and requiring the use of the onboard ramps is not what was promised”.

Flood also pointed out how the ramps shown in photographs of the upgraded Island Line were potentially dangerous because they were too short for the height difference between some of the platforms and trains.

Doug Paulley, a leading accessible transport campaigner, added: “It is great that the Island Line has improved access.

“However, I’m sad that they have failed to deliver on their long-stated promise to take the opportunity of their extended line closure and new stock to deliver level access.

“It is such a disappointment, especially when they openly promised it for so long.

“This last couple of days they’ve been carefully removing references to ‘level boarding’ on their website – and with that, sadly we know that they are locking in gaps and height differences for the foreseeable future.

“I feel that they have orchestrated a gaslighting ‘bait and switch’: promising level access, which brings disabled people independence, confidence and safety, and now not just failing to provide such, but denying that they ever promised any such thing.”

An SWR spokesperson said: “From the outset of the Island Line upgrade project, we have been committed to improving the accessibility of the railway.

“While creating step free or level access across the entire Island Line network was not included in the scope of this project, we have raised the height of platforms and lowered track, making it easier to board trains at board trains at Ryde Pier Head, Ryde St Johns Road*, Smallbrook, Sandown, Lake and Shanklin stations.

“While the platform is level with the trains at these stations, our guards may need to use a bridging ramp due to a horizontal gap between the two.

“In addition to these upgrades, we now have passenger information screens onboard our Island Line trains, making it easier for customers with hearing impairments to travel.”

He added: “We’re sorry that, due to an oversight, the correct range of ramps were not available to our guards when the Island Line reopened last week.

“This has now been rectified.”

But Flood said: “The fact that SWR have now stated that the ramps shown in well circulated images are not the correct ones for the train is staggering on a ‘new to the island’ fleet.

“Did they not consult with real world users beforehand?”

*Platform one but not platform two, which is an island platform that is only accessible via a footbridge