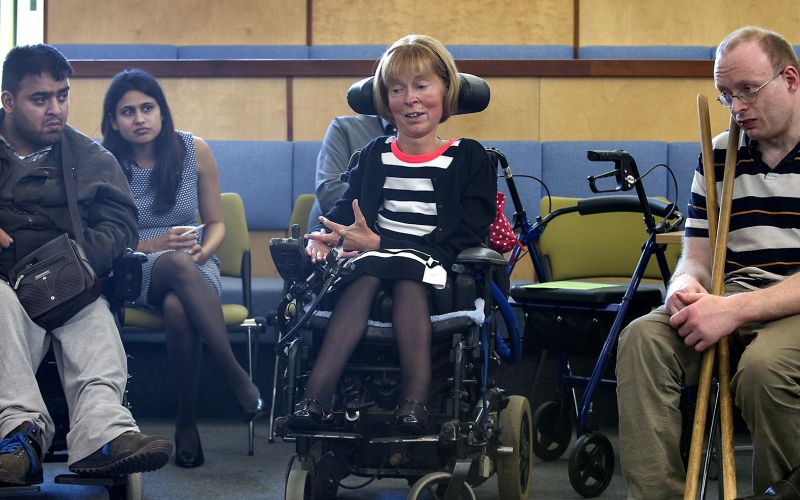 Members of a House of Lords committee examining the impact of the Equality Act 2010 have visited a user-led organisation to hear from disabled people on how the legislation has affected their day-to-day lives.

Six members of the committee – including the disabled crossbench peer Baroness [Jane] Campbell – visited Real, a support organisation for disabled people in Tower Hamlets, east London, to hear from them directly about the reality of their lives five years after the act became law.

Only last week, four legal experts told the committee, which is examining the act’s impact on disabled people, of their serious concerns about the government’s commitment to enforcing disabled people’s rights through the Equality Act.

Mike Smith, chief executive of Real, and the Equality and Human Rights Commission’s former disability commissioner, said the peers were “horrified” by what they were told by his members.

He said: “It was really good for them to hear it from real voices, as opposed to the formulaic responses they get from other organisations.”

Smith said he believed that hearing the “reality of people’s lives” would “galvanise” the peers into making “positive and constructive” recommendations.

He said there had been an “incredible energy in the room” as the committee listened to his members’ evidence.

“Although direct discrimination is less common than 20 years ago when the Disability Discrimination Act was first introduced, too often people were reporting unintentional indirect discrimination, failure to make reasonable adjustments, poor understanding and awareness, and a lack of ability to enforce their rights.

“Many still didn’t know what their rights were or how to find out more.”

Faiz Rehman, a member of Real, said: “I felt it was a good event, and I found it really encouraging that the Lords committee have made this connection to our organisation.

“I personally think the Equality Act is ambiguous and not as concise as the previous Disability Discrimination Act, and I am glad that the committee plan on producing a report on the new legislation.”

Baroness Deech, who chairs the Lords committee, said: “For the committee to get out and speak to disabled people is invaluable for our investigation.

“We heard some frank views on the Equality Act 2010, both good and bad, and they have given us a great deal of food for thought, which will inform our eventual findings.”