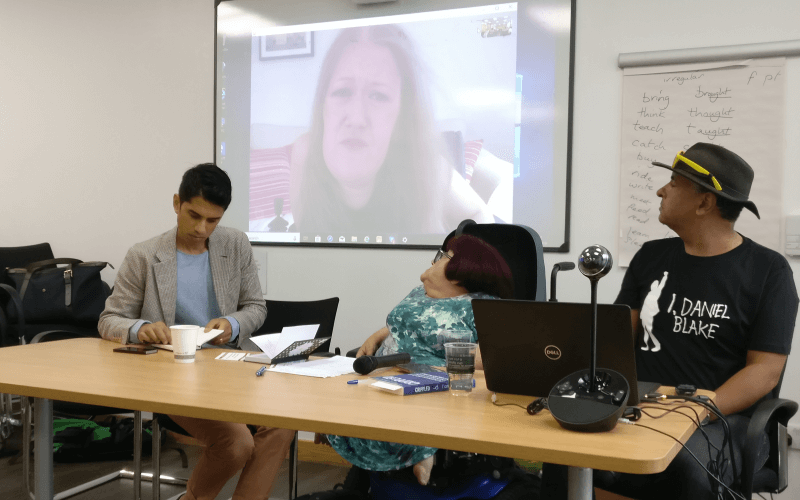 The rise to power of a new Conservative government under the leadership of Boris Johnson has created a “really dark moment” for disabled people, anti-austerity activists have been told at the launch of a new book.

Frances Ryan, a disabled journalist whose book* investigates the impact of austerity on disabled people, told the event that watching Johnson and his new cabinet take power had affected “everybody who looks different and feels different”.

She said: “These moments can feel particularly scary when you’re reliant on the government to help you with all the basic parts of life, being able to get yourself dressed in the morning or leave the house.”

John McDonnell, Labour’s shadow chancellor, warned the event and those watching via a live online feed that Johnson’s silence on disability and social security policy since taking office was ominous for disabled people and those claiming benefits.

He said: “In all the discussions so far he’s mentioned nothing about social security, and nothing about [working-age] disabled people in any of the announcements that he’s had, and I think that reflects their priorities and the direction in which they are travelling.”

Aditya Chakrabortty, who writes on economics for the Guardian, said that Johnson and his new government “have got a very serious plan and it involves effectively concentrating the resources of this country, our resources, into the pockets of the few”.

He said it was the “most pernicious achievement” of successive Conservative-led governments during the austerity era that “they have made us all feel that actually it’s us against them, it’s ‘me on my own’, it’s ‘dog-eat-dog’”.

Paul Atherton, one of the disabled people whose experiences of austerity are described in Ryan’s new book, and who has been homeless for the last 10 years and lives “pretty much at Heathrow Terminal Five”, described how he was currently “destitute” because of his ongoing struggle to secure the benefits he is entitled to.

He said he had “absolutely no funds coming in whatsoever” after DWP decided to stop all his benefits, while the likelihood of receiving any financial support for the next four months was “pretty slim”.

He told the launch event: “What the state or the government or society expects you to do to survive these periods, I have no idea.

“As a human being, why would you inflict that pain and suffering and degradation on another human being? It’s incomprehensible to me.”

And she praised Disabled People Against Cuts – which organised the event, with support from Unite the Union and The People’s Assembly Against Austerity – for ensuring “that the voices of disabled people are being heard and continue to be heard”.

McDonnell praised Ryan, who writes for the Guardian, for “getting the message out about the impact of the last nine years of austerity”.

He said she had been “one of those bright lights we have relied on to get the information out there”, and he said that her book had exposed the “brutality that has been inflicted upon us over the last nine years”.

Ryan said disabled people would need to be “at the front and centre” of any fightback against the loss of their rights.

And she said they would need the political left “to be our allies in this”, and to find ways to “unite and to challenge the dodgy, damaging narratives we have heard in recent years and build a positive, progressive vision for a better society for all of us”.

She said she hoped her book could play “a small part in a much bigger picture of this rallying cry”.

*Crippled: Austerity and the Demonization of Disabled People