You are here: Home / Activism and Campaigning / ROFA conference sees calls for charities to make way for DPOs 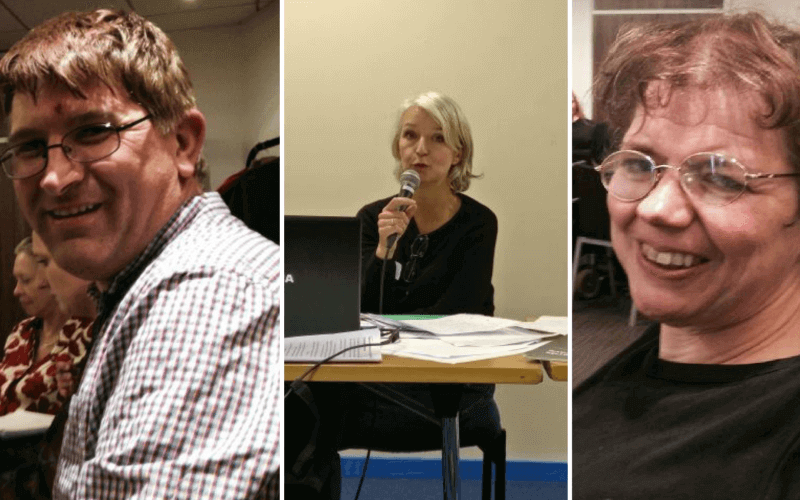 Disabled people’s organisations have called on charities that are not user-led to “move over and stop taking our space”.

The calls came during the Reclaiming Our Futures Alliance (ROFA) national conference, which had been due to take place in Manchester, but is instead being held online over two days because of the COVID-19 pandemic.

A string of disabled activists and representatives of disabled people’s organisations (DPOs) spoke during the first day of the conference (Wednesday) of their frustration at being excluded from discussions with central and local government because of the continuing influence of large, non-user-led charities.

Only a few hours later, the government’s new Disability Unit tweeted how the minister for disabled people, Justin Tomlinson, had spoken with representatives of two of those non-user-led charities, Leonard Cheshire and Scope, about support for disabled people during the COVID-19 crisis.

Among those raising concerns at the ROFA conference about the continuing influence of the charities was Andrew Lee (left), director of People First (Self Advocacy), who said: “One idea I have about the government speaking to non-user-led organisations is to do a campaign to say that they do not speak for us.

“Speak directly to the groups on the ground and speak to people directly.”

He said that when non-user-led organisations comment on key issues, it should be pointed out publicly that they have “a conflict of interest because they run a service” or represent a particular group, such as parents, and that “they are not speaking for us”.

Tracey Lazard (centre), chief executive of Inclusion London, suggested a campaign to “call out the charities and tell them to move over and stop taking our space”.

Richard Rieser, from the Commonwealth Disabled People’s Forum, which was relaunched last June, said the big charities were “just moving in and taking our clothes”, and he called for a “stronger international voice” to challenge what they were doing.

Simone Aspis (right), who leads the Free Our People campaign, spoke of her concerns about non-disabled people “hijacking the agenda”.

Mike Steel, from the grassroots disabled people’s organisation Bristol Reclaiming Independent Living (BRIL), said the influence of the charities meant that local grassroots and community groups were excluded from decision-making.

He said: “Charities get the invites. The voluntary sector competes with each other and speaks ‘for’ – not ‘with’ or ‘by’ – disabled people and mental health service-users/survivors and self-advocates.

“Working-class, rural, impairment-specific, asylum-seekers and self-organised groups are not supported to take part.”

Another disabled activist warned of “non-disabled allies taking over from us”, which she said was often an issue within unions, with funding often “hoovered up”.

And another activist said she shared the frustration at “the same charities being the only ones consulted by government”.

More than 60 disabled activists took part in the online conference, representing grassroots organisations and disabled people’s organisations from across England, and updating colleagues on their work and campaigning priorities and their response to the pandemic.

Dorothy Gould spoke about the work of ROFA’s independent living campaign group, which is pushing for a new independent living strategy, enshrined in UK law and based on article 19 of the UN disability convention, and which would include an end to compulsory admissions to psychiatric hospitals and forced treatment and community treatment orders.

She said there was a need for a “common message about what we mean by independent living under article 19”, and a communications strategy that uses creative ways to promote the campaign.

Ann Galpin, co-chair of the TUC disabled workers’ committee, spoke of the growing links between disabled people’s organisations and the unions.

She said that her co-chair, Sean McGovern, was at the TUC’s general council meeting where he was due to ask the new Labour leader Keir Starmer whether Labour would support the call for the creation of a new national independent living service.

Tracey Lazard, from Inclusion London, said her organisation’s campaigning had led to more than 2,000 people writing to MPs within 72 hours with concerns about the government’s emergency Coronavirus Act, including about its impact on social care.

She said: “This combination of supporting legal action coupled with grassroots campaigning and also grassroots research… is a really effective combination.”

She warned that there would soon be a “huge push” to integrate health and social care, and that “we know what will dominate: a health-medicalised model”.

Akiko Hart, chief executive of the National Survivor User Network, said her organisation – like others – had been “completely overwhelmed” over the last few weeks since the onset of the pandemic crisis.

She said: “We need to think about how we work together and pool our resources because I think it’s impossible for any one of us to cover the things we normally cover, given how things are changing all the time and how we are bombarded with information.”

She said NSUN had received “really concerning” reports of people in mental distress being left with little or no support because of community mental health teams being depleted in the fallout from COVID-19.

She said this would enable BAME communities “to have our own voices, to get our own voices heard” rather than being “ignored by government”.

She added later: “I think it’s time now that the disability movement recognises that ‘nothing about us without us’ includes the voices of BAME communities and particularly those detained, black men in the criminal justice system [and] disabled black women.

“We need help to recognise that we are there… but the disability movement has not pushed our agenda enough, has not supported us enough.”

She said that was why her new organisation was going to be “quite strong” and “might shock some of you”.

Jo Whittaker, from The Alliance for Inclusive Education, said: “One of the things that has really come about as a result of the COVID virus is a recognition of our inter-dependence on each other, the importance of that solidarity and the importance of our coming together to challenge what has been for many of us over many, many years undermining and devaluing of disabled people.

“The greater we can come together and work collectively, the more we can make that challenge.”

He pointed to the increased abuse of disabled learners in institutionalised, residential settings and the importance of inclusive education.

He said ALLFIE had submitted a petition of nearly 109,000 signatures to the government to push for the end of segregated settings and ensure disabled learners have full access to an inclusive learning environment with the appropriate support.

Andrew Lee, from People First (Self Advocacy), said his organisation had been involved in online conferences with people with learning difficulties who were feeling isolated as a result of the pandemic, with support in some areas “non-existent”.

He added: “There is a big issue around people with learning difficulties getting food.”

Richard Rieser, from the Commonwealth Disabled People’s Forum, said there was a need for solidarity with disabled people in other parts of the world, where disabled people were even worse off during the pandemic than they were in the UK.

She said: “This is an excellent time right now for ROFA international to be playing a role and saying, look, how we can learn from what other DPOs are doing internationally in terms of crisis, conflict, wars, disasters, hurricanes.

“There are some massive learnings in how we can make sure that disabled people are part of [responding to a] crisis because this is a massive crisis we are going through.

“We can learn from our disabled brothers and sisters. It’s time to unite.”

Eleanor Lisney, from the disabled women’s collective Sisters of Frida, said she and her colleagues were working – with other women’s organisations – on a joint urgent call for action from the UK government on the impact of COVID-19 on women and girls.

She said: “The work we are doing is trying to make sure that disabled women are visible.

“What is especially important is the violence against women, which is really difficult for disabled women who are at greater risk of domestic abuse due to COVID-19.”

Mike Steel, from BRIL, said many disabled people in Bristol felt the meaning of independent living had been “hijacked” and used to justify cuts to their support.

BRIL also said it had found out from a local councillor in Bristol that – during the COVID-19 crisis – only 50 sets of personal protective equipment had gone out to users of direct payments in the city.

Dr Ju Gosling, co-chair of Regard, the national LGBTQI+ disabled people’s organisation, spoke of the lack of support from the wider LGBTQI+ community over their concerns about the impact of the Coronavirus Act and the right to social care.

She added: “Nobody is asking for our input into any government strategy at the moment. Nobody is listening to us.”

And she said: “We need to be closing care homes and certainly what our communities need is proper care in the community.”

Anne Pridmore, director of Being the Boss, a user-led organisation which supports disabled people who employ personal assistants (PAs), spoke of national research Being the Boss had carried out on the impact of the closure of the Independent Living Fund.

Among the findings were that recruiting and retaining PAs had become more difficult, while there had been a growing lack of understanding of independent living among social care and NHS service-providers, and an “increasing emphasis on health over social care”.

She also said that many of those who took part in the research said they had chosen to stop receiving council-funded care because they could not afford the charges.

Disabled activist Simone Aspis, who leads the Free Our People campaign, said the fallout from the COVID-19 crisis included delays in disabled people being discharged from assessment and treatment units (ATUs) and in the planning of appropriate community care packages for those trying to leave ATUs, as well as the cancelling of leave and banning visitors for disabled people in segregated mental health settings.

She said: “We have got a lawyer on board and are seeking to challenge the blanket policies that seem to be arising from COVID-19.”