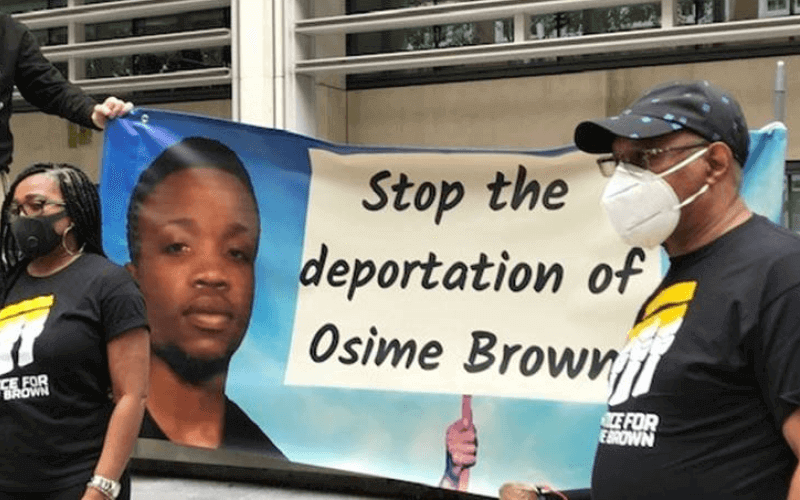 Campaigners are calling on the government to abandon its plan to deport a young autistic man to Jamaica, a country he has not visited since he was four.

The Home Office had planned to detain Osime Brown – who also has learning difficulties and a heart condition – in an immigration centre until his deportation, but it has now agreed to allow him to return home when he leaves prison this week.

The 21-year-old was due to be released straight into detention from prison after serving a sentence for a conviction under controversial joint enterprise laws – he was present at a street robbery but is believed to have asked the other teens carrying it out to stop.

A petition to halt his deportation to Jamaica, started by autistic activist Emma Dalmayne, has so far secured more than 120,000 signatures.

After a successful appeal against the original decision to deport him, there will now be a fresh tribunal hearing into his proposed deportation.

They said: “Osime’s case shines a light on institutional racism in many of its forms, and particularly concerning in Osime’s case, the intersection of racism with the discriminatory treatment of disabled, neurodivergent people and people with autism, especially in places of detention.”

The government must look at examples of good practice in other countries to help it produce a strategy that will protect those who need to shield from the pandemic during the expected second wave of COVID-19, according to a panel of disabled advisers.

The Greater Manchester Disabled People’s Panel also said that only a joined-up strategy targeted at eliminating as much transmission of the virus as possible would “reduce the inequality” that the pandemic has “exposed and exacerbated”.

In a statement on shielding, the panel said: “People of colour, women, people in poverty, disabled people, and many of us [sharing] intersecting identities, have all been disproportionately harmed by the current national strategy.

“A second wave with the same approach and apparently less support is unjust and terrifying for many.”

The panel pointed to the UK government’s failure to put in place support mechanisms in the early weeks of the crisis, which left many disabled people without basic resources such as food, medicine, personal assistants and carers.

The panel said that shielding may have been “more of a choice for disabled people” if the pandemic had been managed differently.

It pointed to a series of factors that had made communities less safe for disabled people, including inaccessible public health information, unclear rules, senior figures undermining public health messages, the initial delay in moving into lockdown, and then leaving lockdown too early, introducing the Eat Out to Help Out scheme, re-opening pubs, the failure to introduce airport testing, and “perhaps most importantly, the problematic test, track and trace system”.

New research suggests that many disabled people are prevented from fostering children because of “negative attitudes and unnecessary barriers”.

The report, Mutual Benefits: The Potential of Disabled People as Foster Carers, concludes that disabled people could help address the shortage of foster carers “if they are given the chance”.

It says that the education watchdog Ofsted fails to monitor the number of disabled foster carers, that barriers are put in the way of disabled people who want to become foster carers, and that agencies have been doing little to encourage them to apply.

It calls for a “proactive approach” from councils and foster agencies to encourage more disabled people to consider foster caring, and for “more inclusive practices” in the foster carer recruitment process.

The project was led by the University of Worcester and the disabled people’s organisation Shaping Our Lives, along with the Foster Care Co-operative.

Becki Meakin, general manager of Shaping Our Lives, said: “Professionals in many fields lack the confidence and knowledge to work effectively with disabled people.

Kamran Mallick, chief executive of Disability Rights UK (DR UK), added: “It’s disappointing that this research reveals the sector needs significant cultural change if disabled people are to be given genuine equality of opportunity in this field of work.”

The report is the latest piece of research to come out of the five-year, £5 million Disability Research on Independent Living and Learning (DRILL) research programme, which is led by disabled people and funded by the National Lottery Community Fund, and delivered by DR UK, Disability Action (in Northern Ireland), Inclusion Scotland and Disability Wales.

The Women’s Equality Party has added its voice to concerns – first reported by Disability News Service – that the mayor of London has set up a board of nearly 30 senior figures to oversee the recovery from coronavirus in the capital without including any members representing disabled people.

The party has told Sadiq Khan in a letter that the oversight with appointments to the London Recovery Board was “particularly shocking” because of the “grossly disproportionate” impact of the pandemic on disabled people, who “should never have been forgotten by their Mayor in this way”.

One of those signing the letter was Dr Hannah Barham-Brown, a disabled campaigner and deputy leader of the party.

She and her colleagues – party leader Mandu Reid and Greater London Authority candidate Dr Sarabajaya Kumar – told the mayor that women had also been disproportionately impacted by the pandemic response, so disabled women “face a combination of negative effects” and their voices “must be heard as we plan our collective recovery”.

The Department for Work and Pensions (DWP) has confirmed the appointment of the “architect” of universal credit as the next chair of its “independent” committee of advisers on social security.

Dr Stephen Brien wrote Dynamic Benefits (PDF), the report that became the blueprint for universal credit, and he is still a board member at the Centre for Social Justice, the right-wing thinktank which published his report in 2009.

He worked closely on that report with Sir Iain Duncan Smith, who introduced universal credit as work and pensions secretary in 2013.

Last month, Mark Harrison, from the Scrap Universal Credit Alliance, said that appointing such a “tame cheerleader” to chair the social security advisory committee (SSAC) would help ministers avoid scrutiny and would be like “giving Mr Wolf the keys to the hen house”.

SSAC is supposed to be an independent body that provides impartial advice to DWP on social security matters and scrutinises secondary legislation related to the benefits system.

Although DWP confirmed the appointment this week, it said Brien had taken up his post on 14 September.