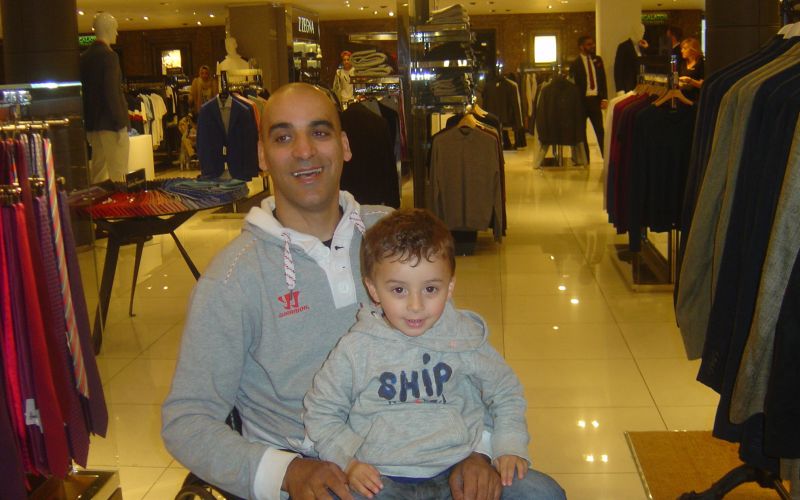 A disabled parent has accused his local authority of discriminating against him by refusing to take his access needs into account when deciding which primary school his son can attend in September.

Youcef Bey-Zekkoub believes the school admissions process discriminates against him and other disabled parents because although it pays some attention to the access needs of disabled children it ignores the access requirements of their parents.

Bey-Zekkoub has asked education secretary Nicky Morgan to act because there is nothing in the school admissions code that recognises the access barriers disabled parents face.

His three-year-old son Adam (pictured with his dad) has been attending a nursery class at the Streatham site of Henry Cavendish school in Lambeth since last September.

The only reason he applied for a place for Adam in that nursery class last year was because it was the only school that was accessible to him in the area.

Because the school is so accessible with dropped kerbs nearby, refurbished pavements outside, two accessible parking bays, an accessible toilet and helpful staff, he has been able to play a full part in his son’s education, reading stories to him with other parents every Friday, attending a school assembly, and attending a parents group and a consultation event.

But he has now been told by Lambeth council that his son has not been given a place in the reception class this September, and will instead have to attend another school, which has no accessible toilet for his dad to use and will mean a “totally impossible” journey to and from the school.

Bey-Zekkoub has checked all of the other local primary schools and says they are not accessible for him, because of his various access needs, including limited use of his upper body and hands.

He highlights these schools’ steep ramps, heavy school doors, a lack of dropped kerbs, their location on steep hills, uneven pavements, and the “inaccessible streets and pavements which make the journey extremely difficult or impossible to do especially in winter time”.

Bey-Zekkoub has told Morgan that there is nothing in the school admissions code that refers to the needs of disabled parents, and added: “I believe the schools admission code should advise local authorities and schools to take in consideration disabled parents’ needs when offering places to children.”

And he said he believed it was a problem faced by other schools, and other local authorities across the country.

He has appealed the decision to refuse a place for Adam at Henry Cavendish, but fears that it will be turned down because there are no grounds for making an appeal that involve the needs of disabled parents.

He told Disability News Service: “I strongly believe that it is unfair and discriminatory that children who have disabled parents are not able to attend school because local authorities failed to support and/or provide reasonable adjustment to their disabled parents.”

He also believes that the council could be discriminating against his son, under the parts of the Equality Act covering discrimination by association.

Bey-Zekkoub is being supported by The Alliance for Inclusive Education (ALLFIE), which has written to Morgan to ask her to consider the omission of the needs of disabled parents from the code “as a matter of priority”.

In her letter, ALLFIE’s chief executive, Tara Flood, said she believes that the admissions code breaches the Equality Act 2010 by discriminating against disabled parents.

Flood says in her letter: “The government is very keen to talk about increasing choice for parents, but in Mr Bey-Zekkoub’s case he is left without choice and in fact is now in a worse situation because unless the school place decision is overturned, he will no longer be able to play an active role in the education of his son.”

A Department for Education spokesman confirmed that Lambeth council does not offer children priority with admissions to Henry Cavendish based on their parents’ impairments.

He said: “The admissions code requires all admission policies to be fair.

“Any parent can object to the schools adjudicator if they consider an admission policy to breach the admissions code or to be otherwise unfair and the parents’ rights of objection are clearly set out in the school admissions code.

“We will consult on revising the code in due course, and would be happy to receive comments from parents and representative bodies on how it can be improved to make the admissions system clearer and fairer. We will respond to this letter in due course.”

The spokesman claimed that the admissions code does allow local authorities to adopt their admissions criteria to give pupils priority based on medical or social needs, and does not restrict this to the needs of the child.

But he said the Equality Act was clear that schools cannot discriminate in deciding who is offered admission, and that schools and local authorities have to consider the impact of their policies on disabled people in order to comply with their public sector equality duty.

A Lambeth council spokesman said Adam’s case had been “fully assessed” by the council’s MEDSOC panel, which considers school admissions cases involving children with “exceptional medical or social needs”, and includes senior members of staff from its special educational needs and disabilities, school admissions and safeguarding teams, and an educational psychologist.

He said: “After serious consideration of all the notes and supporting documents provided regarding this case, it was noted that there are several community schools significantly closer to the parent’s home that are fully accessible by car and wheelchair and that the preferred option was not the only school, nor closest school, that could meet the parent’s needs in terms of accessibility.

“The request for consideration under the MEDSOC criteria was, therefore, not upheld.”