The Scottish government has failed to introduce a new law that would have improved access to pubs and clubs for disabled customers, more than six years after it was approved by parliament.

The Scottish parliament passed the measure as an amendment to what became the Criminal Justice and Licensing (Scotland) Act in July 2010, but the SNP government has admitted that it has yet to bring it into force.

The amendment should have meant that bars and restaurants applying for new alcohol licences – as well as existing venues applying for major changes to their licences – had to provide details of how accessible they were to disabled customers.

But despite the bill becoming law in 2010, the Scottish government has yet to “commence” the measure.

A Scottish government spokeswoman said it had been focused instead on “wide-ranging” changes to various licensing regimes, and could only promise that the access measure would be brought in by the end of the current parliament, which could mean a further delay of up to four years.

She said: “The Scottish government has been focussed on legislating for wide-ranging changes to various licensing regimes via the Air Weapons and Licensing (Scotland) Act 2015.

“We are now working on the implementation of these provisions and will also bring in outstanding provisions from earlier legislation such as the disabled access statement that was included within the Criminal Justice and Licensing (Scotland) Act 2010.

“The expected timeframe is by the end of this parliament.”

The delay emerged in the wake of the decision by Labour peers to abstain on a vote for an even stronger amendment on access to licensed premises, as part of proposed legislation in the House of Lords.

The delay in Scotland has come as a bitter disappointment to the disabled activist whose campaigning efforts led to the amendment becoming law.

Mark Cooper, whose Barred! campaign was credited with securing the law change, said: “I am deeply disappointed the introduction of the amendment to the act – which I campaigned for – is taking so long.”

The wheelchair-user launched his campaign after having to leave a pub mid-drink when he realised there was no accessible toilet.

He said he had hoped that the Scottish government’s launch last month of its five-year disability rights plan, A Fairer Scotland for Disabled People, would “speed things up”.

He added: “I look forward to its implementation at the earliest possible opportunity.”

“Disabled people should have the same rights to enjoy a night out as everyone else and we can only quote Martin Luther King in saying that ‘justice delayed is justice denied’.”

A leading Scottish disabled activist, Dr Jim Elder-Woodward, added: “I am really disappointed that the Scottish government will take so long to implement this new piece of legislation, especially after Mark Cooper’s hard campaign.

“Within their publication, A Fairer Scotland for Disabled People, the Scottish government states: ‘… a fairer Scotland can only be realised when we secure equal rights for everyone. When we do that, the lives of each one of us will be richer, more fulfilling and more secure.’

“If that is what they believe, then they shouldn’t be dragging their heels over a piece of legislation giving disabled people the freedom to enter places of leisure and recreation, which the Scottish parliament passed over six years ago.” 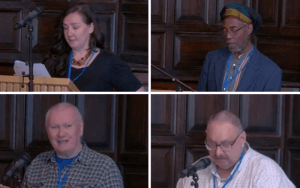