You are here: Home / Activism and Campaigning / Spartacus report: Labour looks set to dump its ‘fitness for work’ test

Labour’s shadow minister for disabled people has suggested her party will replace the work capability assessment (WCA) if it wins power at the next election, after a report by disabled campaigners called for the “toxic” test to be scrapped.

Kate Green praised the Beyond the Barriers report, which examines the system of sickness and disability support, and said it was “full of interesting ideas” and that she would be treating it with “great seriousness”.

The report by the Spartacus online campaigning network – backed by evidence from more than 1,200 sick and disabled people, and drawing on the best of the systems used by seven other countries – concludes that the WCA is “inaccurate, unreliable and invalid”.

And it demands a new system that is “radical and ambitious” and “inspires, enables and encourages” disabled people, rather than the current “punishing, penalty-based system”.

Green said she agreed with Spartacus that the WCA and the rest of the system for testing eligibility for employment and support allowance (ESA) had “fundamental problems”.

Although she was not in favour of scrapping it immediately – because there would be nothing to put in its place – she said she did want to see a “very fundamental reshaping” of the current system, and eventually “something that looks very different” to the “discredited” WCA, which was introduced by the previous Labour government in 2008.

Her concerns about the WCA include the points format of the computer-based test, and the way it takes a one-off “snapshot” of the impact of a person’s impairment – particularly a problem for those with fluctuating conditions – all of which was outlined in the report.

Green said: “I would hope it would be an urgent priority to look at what we should have that would work better.”

She has held more than 20 meetings with disabled people and disability groups – and people involved in designing the original WCA – over the last couple of months, in a bid to answer the question of how to reform the system.

She said that the Spartacus report – which also examines the failure of the government’s Work Programme – was a “really useful addition to that thinking”.

She said: “This isn’t a quick fix for me. We have got really fundamental problems… If we are going to embark on reform, I want it to be reform that actually gets it right.”

But Green warned that a Labour government would need to “work our way through step by step”, because the Department for Work and Pensions (DWP) was currently in a “very fragile state”, due to “huge problems” with the introduction of universal credit, and problems with the WCA and the new personal independence payment, as well as other coalition reforms.

She said a Labour government would have to be careful not to “knock the whole department over completely” with any new reforms.

The report of Labour’s own taskforce, led by Sir Bert Massie, former chair of the Disability Rights Commission, which has been examining how to “break the link between disability and poverty”, is likely to be published this month, and Green expects there to be “quite a lot of overlap between what the taskforce says and what this report says”.

DWP has refused to say whether it will read the Spartacus report, but a DWP spokesman said in a statement: “Through a series of independent reviews and by working with medical experts and charities, we have considerably improved the WCA process since 2010 to make it fairer and more accurate.

“More people with serious health conditions are getting unconditional support than ever (51 per cent of claimants).”

He added: “The Work Programme is overhauling how the very hardest to help people are supported off benefits and into a job by giving people two years of tailored support. Previous schemes didn’t do enough to help disabled people into work.”

Beyond the Barriers points out that the latest government figures show just five per cent of ESA claimants achieved a job outcome within a year through the Work Programme, and just 1.8 per cent of those previously claiming the old incapacity benefit.

Stef Benstead, the report’s lead researcher, said she was not optimistic that Conservatives would accept the report’s recommendations, because the party was pushing for less support and tighter conditions on benefit claimants.

But she was more hopeful about Labour, as Green “seems to totally get it that ESA does not work and needs to be totally over-hauled”.

She said: “I get the impression that the Labour party under Ed Miliband is very different to Labour under Tony Blair and Gordon Brown.”

Among others who have reacted positively to the report are Dame Anne Begg, the disabled Labour MP and chair of the Commons work and pensions committee, who said it was an “important contribution” to the debate on how to replace the “much-hated” WCA with a “good and fair test”.

Disability Rights UK also welcomed the report and its recommendations.

The mental health charity Mind said Beyond the Barriers provided “interesting and constructive suggestions”, and the disability charity Scope said it “strongly” welcomed the report.

Simon Barrow, co-director of the beliefs and values think-tank Ekklesia, said the report “demonstrates from a wealth of evidence the failure of the current ESA system and the assessments driving it”, but also proposes a “credible, alternative approach rooted in the experience and expertise” of disabled people. 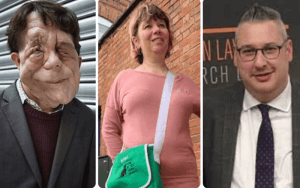